Taiwan is known for the delicious street foods found in night markets – open-air street bazaars that operate at night. Traditionally located on in the corners and outskirts of large cities, night markets trace their roots back to Tang dynasty China (618-907CE). From the Song dynasty onwards, night markets played a central role in Chinese nightlife with restaurants and brothels.

The night market in Keelung is perhaps is the most famous in Taiwan, and known especially for great seafood. As the northernmost city in Taiwan, Keelung is the island’s second largest seaport after Kaohsiung.  First inhabited by the Ketagalan, an aboriginal tribe in Taiwan, it was taking by the Spanish in the early 17th century with the fort San Salvador de Quelung being built in 1624. The city borders New Taipei and is a 30 minute drive from center Taipei. It is also accessible by both train and bus.

The night market in Keelung is a 7 minute walk from the train station and is commonly known by the name Miaokou Night Market as its entrance is located next to Dianji Temple (worth a detour visit). Small in size, it is set-up in the shape of a “L”. 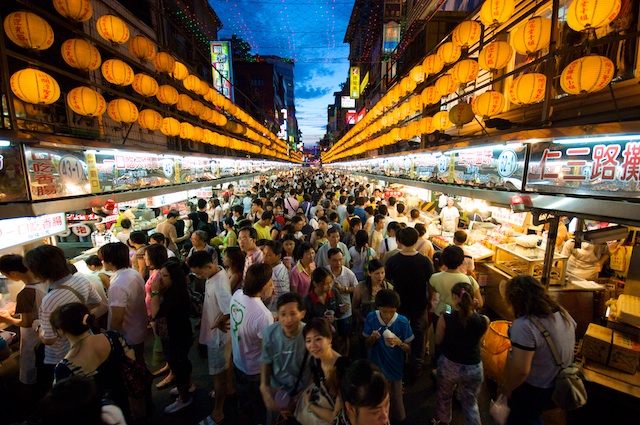 Typically, upon arriving, I would have whipped out my phone to read reviews, but it happened that day that my battery had died. Not knowing what to eat, I  walked the length of the market, which takes only about 20 minutes to walk from one end to the other, to scout out the booths with the longest lines – always a great indicator of good, tasty food.

Among other delicious street foods, I had that night my first oyster omelet.  I recall how I had done a double take when I first saw the sign – oyster omelet.  At first I thought the English an incorrect translation, a quick scan of the Chinese confirmed that the English was correct – I’ve always loved fresh raw oysters, but for some reason never thought that it could be eaten cooked as well. Intrigued, I lined up for a spot at the bar-like table, and ordered an omelet.  Boy, was it yummy! The puffiness of the eggs, the soft, tender oysters that seemed to melt into your mouth upon taking a bite. If I weren’t as full as I was, I’ld have taken a second helping.

It’s been 5 years since then and once in a while, I’ld still think back to that omelet.  Last week, I chanced upon farmed oysters on sale at Walmart and thought, why not give it a try? And so, I bought a one pint container of Hilton’s fresh pacific oysters and got cooking.