The Isamu Noguchi Garden Museum, housed on the grounds of a former gas station and photogravure plant, was designed by Noguchi himself and opened to the public in 1985 on a seasonal basis.

Born in 1907, Noguchi’s artistic career spanned six decades starting in the early 1920s and continuing until his death in 1988. He lived not only through some of modern history’s biggest high and lows, but also experienced first hand the Japanese American interment camps and was accused of espionage during World War II, a full FBI investigation ended only through the intervention of of the ACLU. Like with so many artists of the generation, it is easy to try and read into the external backdrop of Noguchi’s life to interpret his works. Perhaps that is why starting in the 1960s (and maybe even before then) he put into motion the pieces to build his own museum, to control his own legacy.

One first enters into Area 1 where basalt sculptures are set against a harsh post-industrial space that is at once confined yet open and airy with soft undertones of nature.

As explained in the visitor’s guide, visible on their surfaces are at least four different “hands”. The organe oxidation is nature at work. The almond shaped holes were drilled by masons who split the stone apart using bamboo wedges and water pressure. The pitted surface was produced by Noguchi working with a point chisel, the polished areas by Noguchi and his assistants working with softer grinding stones and motorized grinders.

“As boulders, no two stones can be alike, but there is also the opposite corollary that no stone become immutable before its final consecration. Until then, matter remains primal and open” (Noguchi in The Isamu Noguchi Garden Museum, New York, Abrams, 1987).

What intrigued me most was the interactive play in changing perspective, whether intentional or unintended. Approaching from the side, a seemingly innocent goldfish morphs into the powerful “Mountain Breaking Theater” (1984) where time seem to be caught at a standstill with straight lines and polished surfaces forcefully split apart by a broken ridge. 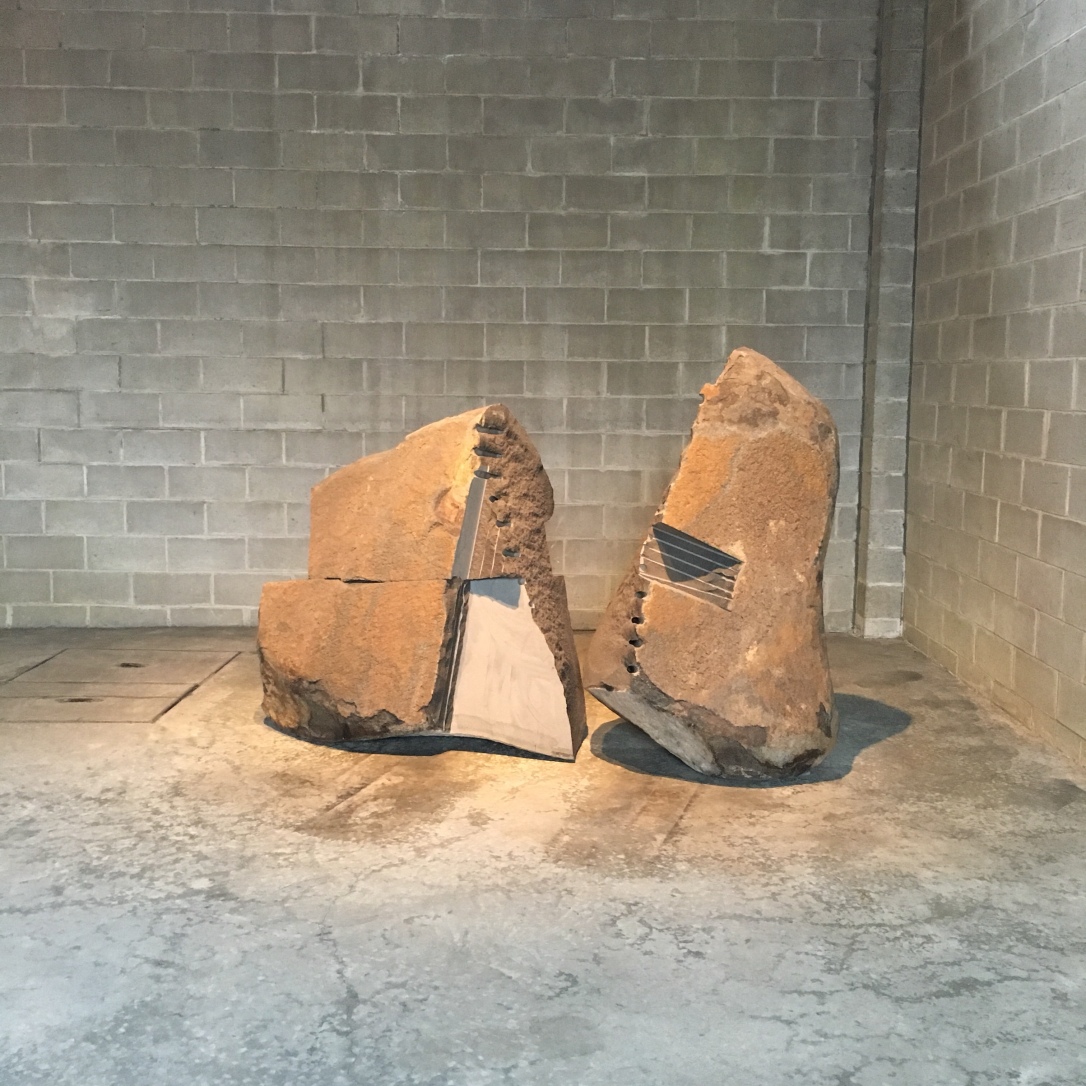 In “Magic Mountain” (1984), Noguchi seems to be questioning our sense of reality with the stairs leading to…

Together with the shape and contour of the rock that subtly hints at a face, at a living creature, the sculpture challenges us to ponder on the metaphysical. 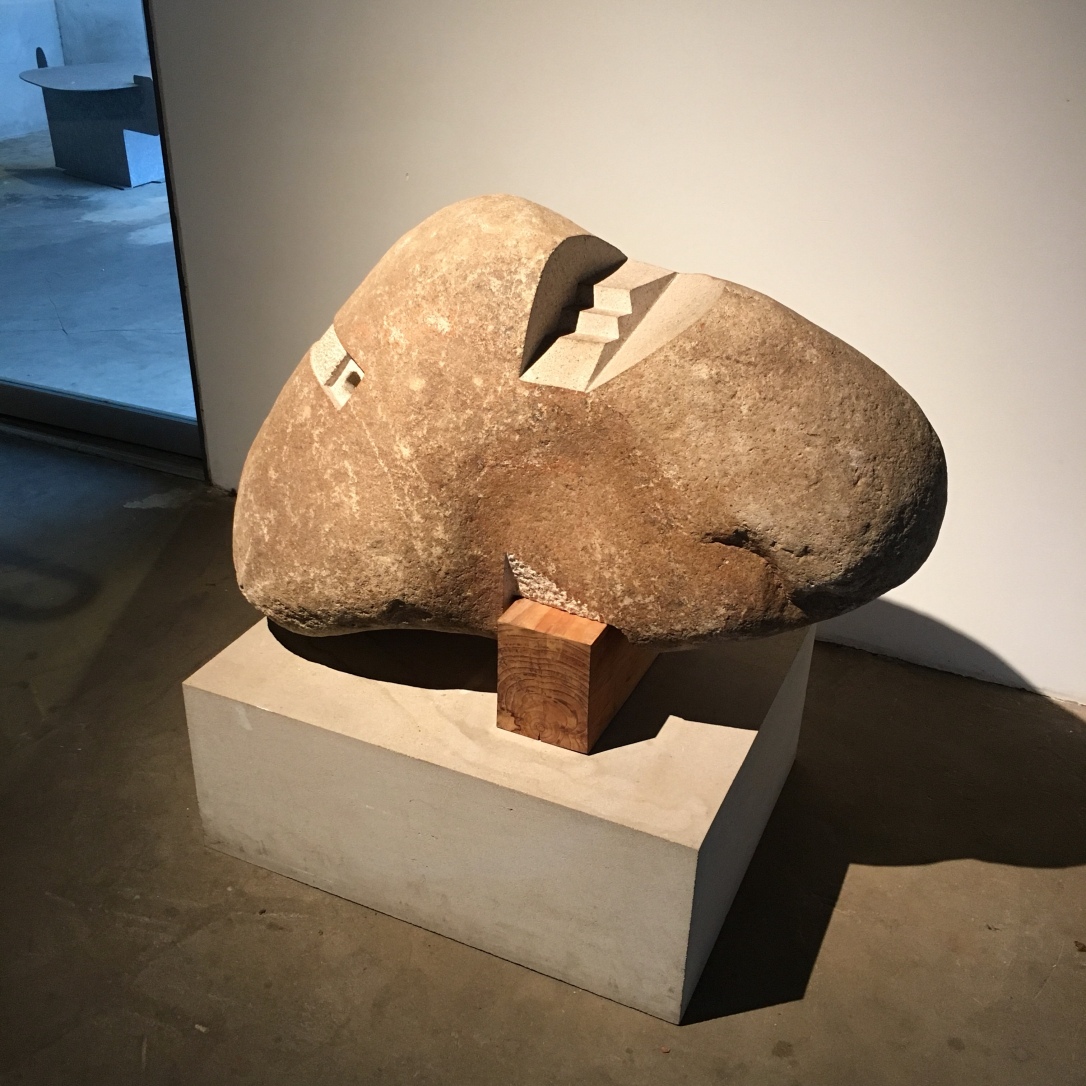 This contemplative interplay between man and nature is a core of Noguchi’s explorations and also seen in “To Bring to Life” (1979) where minimal touches, only two in fact, were applied by Noguchi to allow nature to speak for itself — the polishing of the carved surfaces and the positioning of the rocks to allow gravity eternal to hold it upright in place. 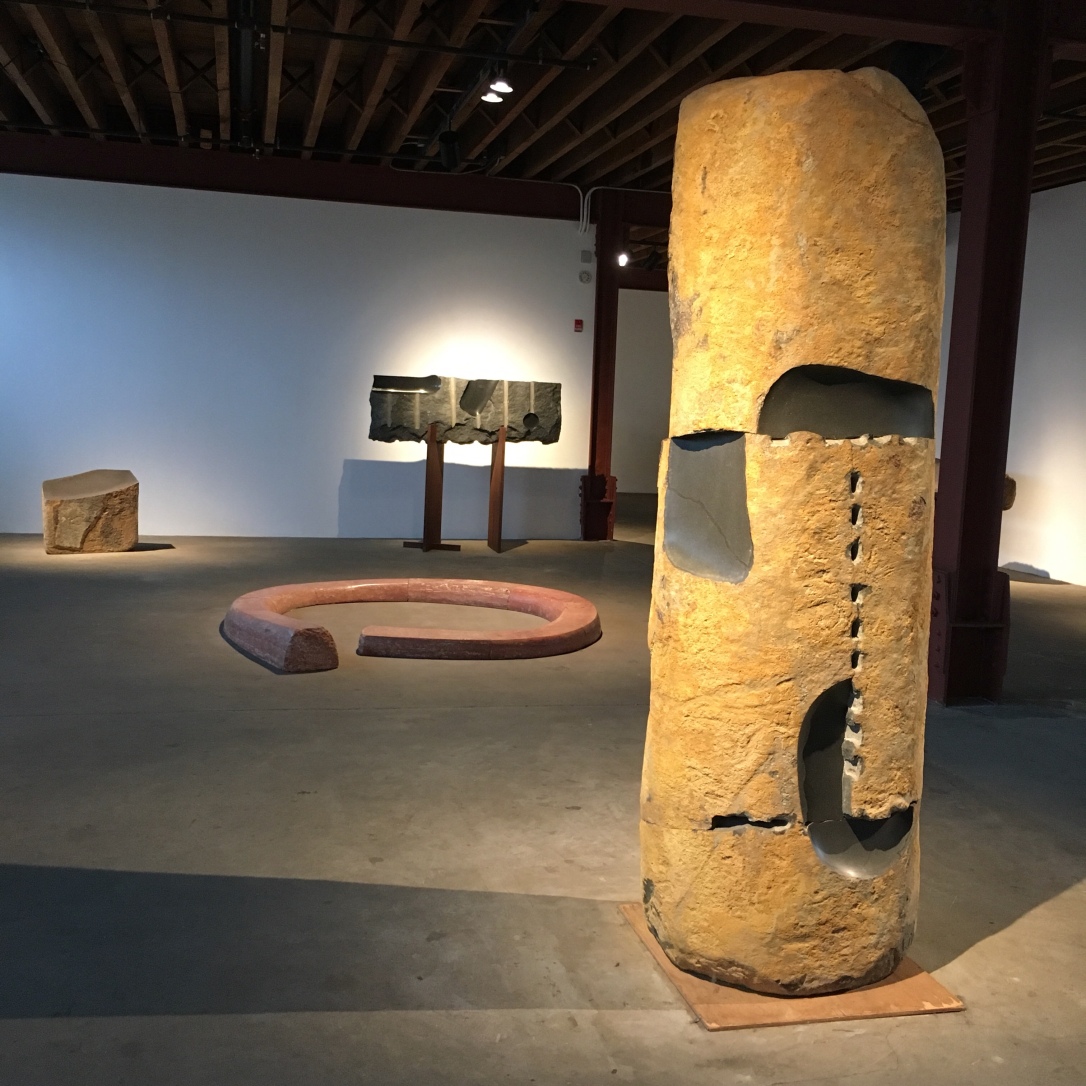 For me though, the gem of the museum lays outside in the garden space Area 2, which was conceived as a continuation of Area 1 but subjugated to the natural elements. 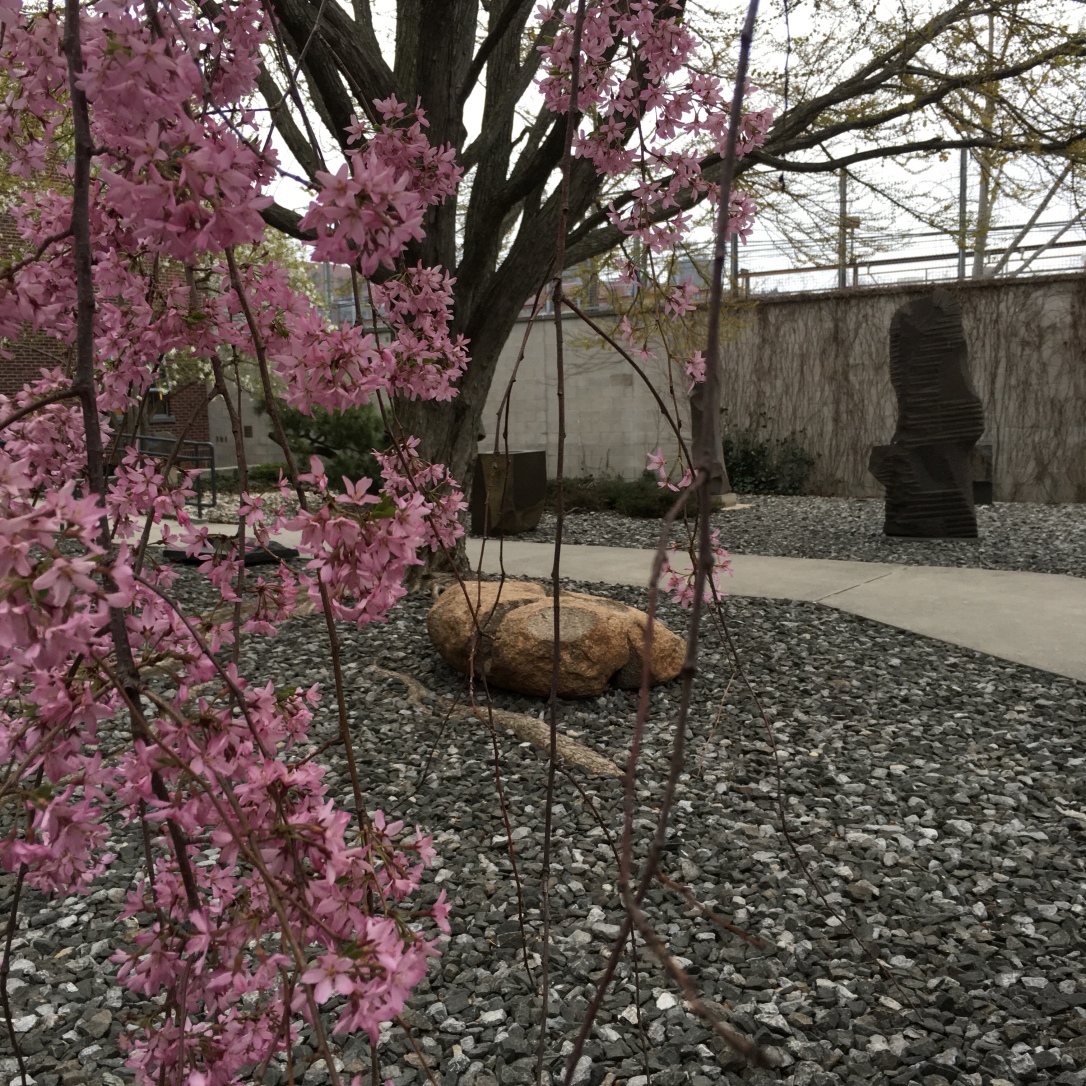 “It is apparent that stone lives outdoors, especially the hard stones, real stones, such as granite and basalt.  Their weathering seems to coincide better with our own sense of historical time than does the aging of marble, bronze or steel, weather is a decomposition that is not an added space. There is a time passage to stone not unlike our own. A mellowing takes place that would not otherwise possible. Time stops not by contest but by becoming a part. The changes add and do not subtract.” 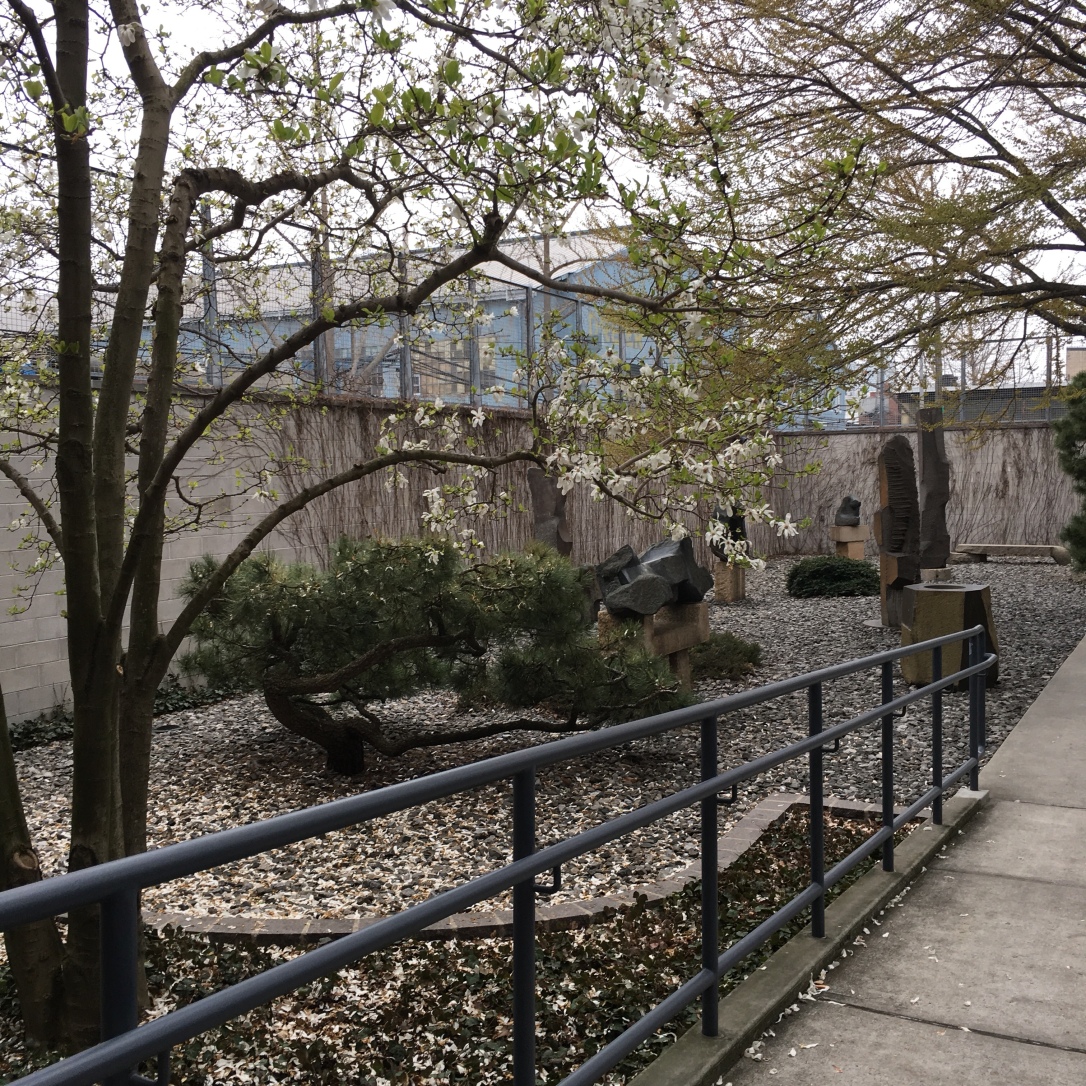 From here, one heads up to the second floor of the museum to Area 9/10, designed to be a warm and intimate space in which the ceiling is no higher than a typical residential building.

It’s fascinating to see the sculptures interact with completely differing environments.  It’s a reminder of how our perceptions are at all times tied to our external surroundings and easily swayed.