Cushioned into the mountainside of the Chestnut Ridge at 2,050 feet above sea level, Kentuck Knob is barely visible from view. It was one of the last Frank Lloyd Wright houses ever constructed.

Wright was 86 when I.N. and Bernardine Hagan, friends of the Kaufmanns, approached him to design for them a luxury Usonian house in 1953 on the newly purchased 80 acre property on the western-most ridge of the Allegheny Mountains in Pennsylvania.  He designed for them not a house on a hill, but a house of the hill and belonging to it. 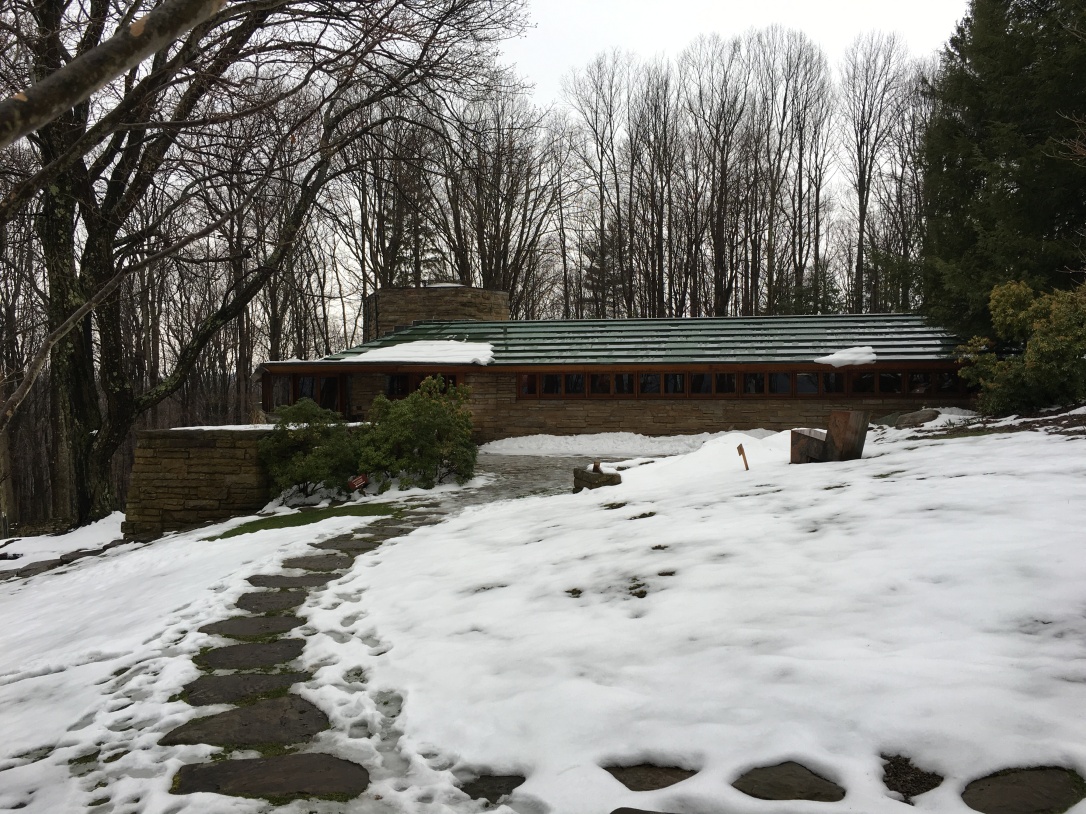 Kentuck Knob represents a coming together of the many principles of organic architecture that Wright had developed and refined throughout his career.

Though not cut of the same clothe as the dramatic Fallingwater nearby, Kentuck Knob is equally mesmerizing for its meticulous design details. 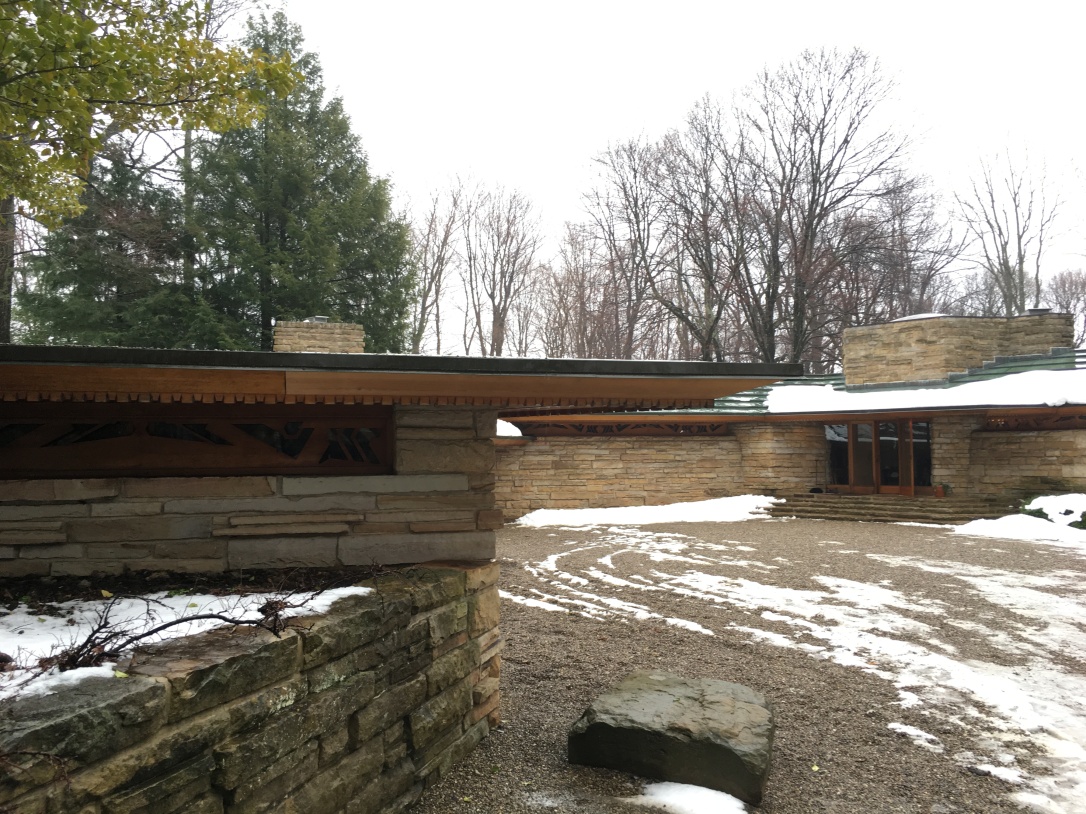 Native sandstone and tidewater red cypress coupled with a low-lying one story structure further assist to the inconspicuous infusing of house into the folds of the mountain.

The recognizable red Wright signature tile is on proud display on the lower right hand side of the main entrance, a subtle testament to Wright’s confidence and one could almost say arrogance an architecture. Aside from a single visit during the construction phase, Wright never set foot onsite declaring by that he could have “shake it (Kentuck Knob) out of his sleeve at will”. 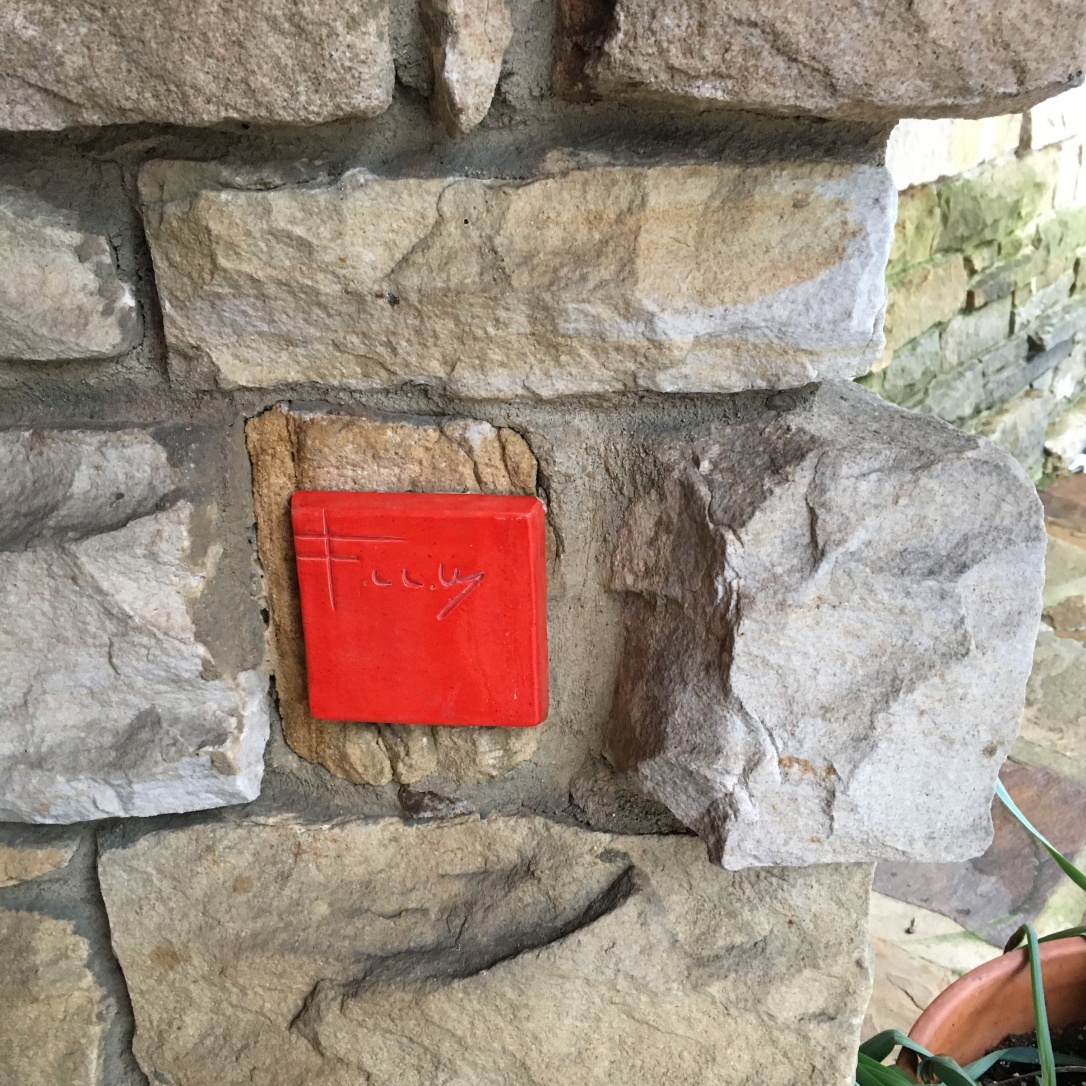 The detailing is such that if one looks closely at the door to a guest room right beside the carport below, that is not a welcome mat on the ground but inlaid stone tiles made to look as such. 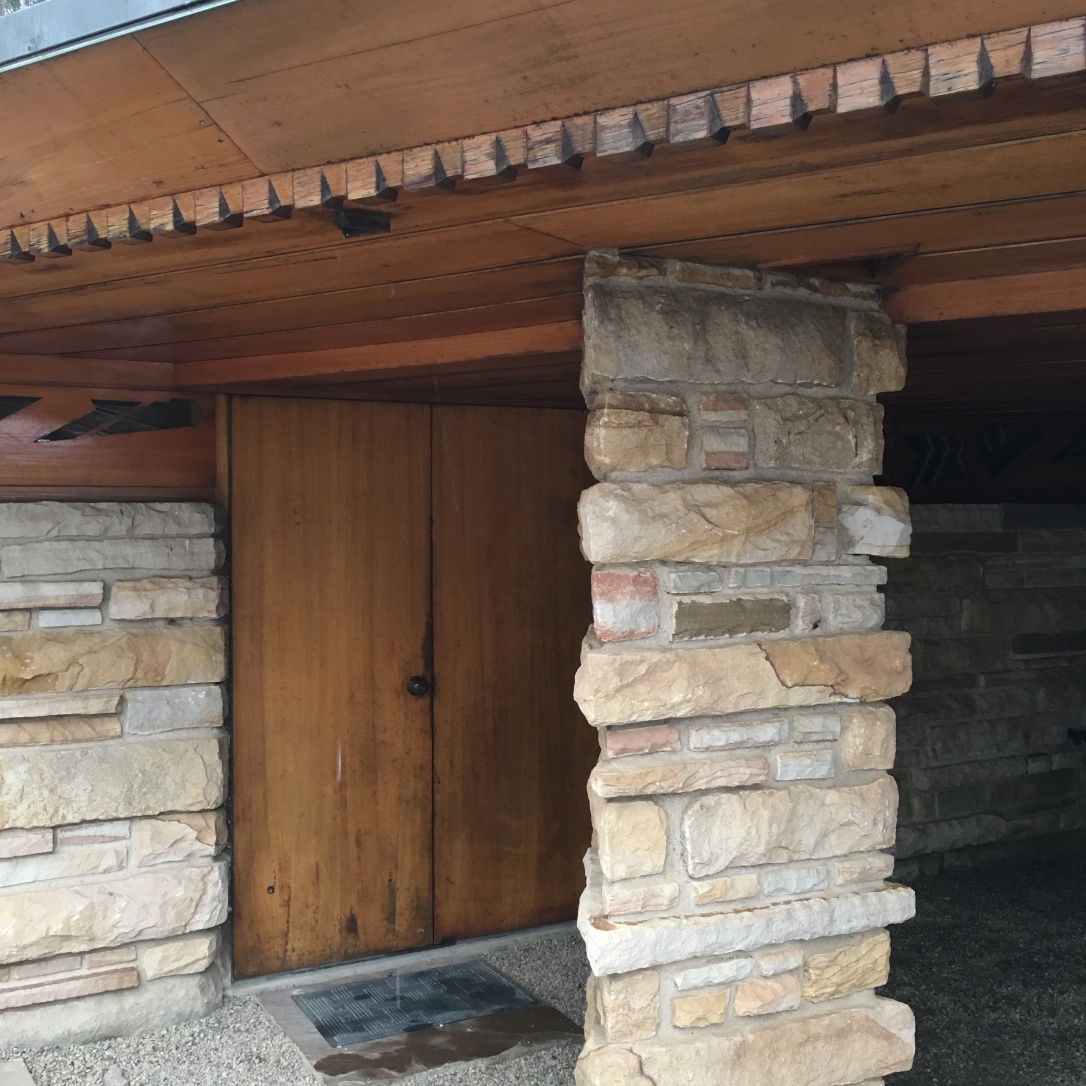 Though the unifying geometric thread that connects Kentuck Know is the hexagonal, and its diminutive the triangle, Wright ingeniously uses the outlines of the structure itself positioned at various angles as a decorative motif. Behind the decorative cypress boards are windows, and when the sun shines, shadows of the same are cast within the room.

One isn’t allowed to take photos within the house as it’s still currently a (part-time) private summer residence, so any of the images showing the interior comes from the Internet.

Stepping through the doors, one enters – you guessed it – a large open space brightly lit with natural light. In the center of the home is positioned the hearth recessed into an hexagonal column. It is said that the Hagans grandchildren loved to running in circles around the free-standing hexagon – chasing each other in games of tag on rainy days.

The porch once looked out onto the sweeping view of the sweeping hills and farmlands in the Youghiogheny River gorge, which the Hagans had fallen in love with. Today, one can still obtain the same view by walking to the edge of the property as the Hagans had planted hundreds of native trees surrounding the house which now matured, block it from view.

coming back to the porch, Wright had designed the outer edge of the awning roof so that when it rained, water would cascading vertically creating the effect of a curtained waterfall. The glass capped hexagonal skylights employs the same slanted side edges as pioneered by the Shaker communities of New England for their homes, which allow more light to diffuse through than the typical straight edged window frame.

The original design had the porch extending the full length of the house, leaving a very compressed space for the dining nook. Mrs. Hagan insisted on having a proper dining area. In the end, Wright conceded by extending the hexagonal skylights indoors to create an trompe l’oeil effect of a continuous porch.

Wright, who liked built-in furniture because it was “client-proof,” had conceived and installed in the space a simple plywood table and chairs, angular and hard-edged as was his style.

It so happened that when the Hagan were in New York furniture shopping, on Wright’s suggestion to look for Scandinavian pieces, the Times published a story about a Japanese woodworker named George Nakashima working out of New Hope, Bucks County, Pennsylvania. The Hagans decided to pay a visit on their way home.

“We immediately loved the pieces we saw there,” Hagan writes. The natural, free-form contours of Nakashima’s tables were a complement to Wright’s organic architecture. And so it was that Nakashima, in addition to other pieces, crafted a custom English oak table the same color as the cypress alongside eight English walnut dining room chairs with woven grass seats. 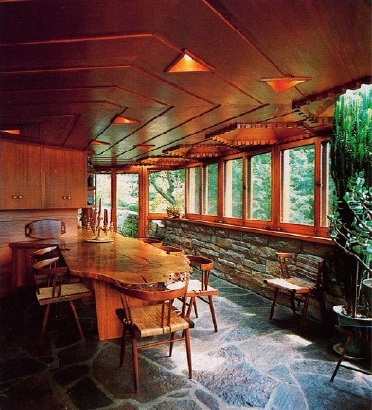 Located within the hexagon is the kitchen, with counters and cupboards covering all sides. In part to maximize counter space, but also in keeping with the technological innovations of the time, the kitchen was equipped with four fold-down electric range top burners (the kettle is sitting on a folded-down range).

One can imagine how hot it would get inside the enclosure on warm summer days, yet Wright would not hear of removing any of the walls to allow for enhanced air flow as it would compromise the integrity of the design. 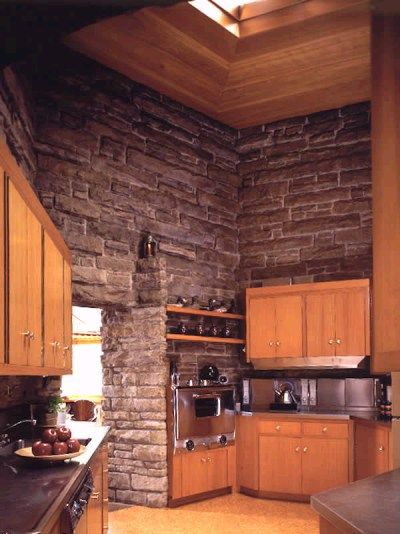 Proceeding through the kitchen down a narrow, dimly lit hallway (the compress and release), one arrives at the master bedroom.  Here, Wright had lowered the windows down to eye level and placed shelf directly above, forcing anyone inside the room to immediately direct their attention outwards unto nature.

A stickler for clean lines, Wright would have been appalled to see objects placed on top of the shelves – in fact he unequivocally forbade Mrs. Hagan from doing so in a letter.  Yet, as he never visited the house, the Hagans made it their own.