The history of Oak Park begins in 1835, when Joseph Kettlestrings, an immigrant from England, purchased 172 acres of land just west of Chicago for a farm. More farmers and settlers had entered the area which was known at that time by several names, including Oak Ridge – so named as an actual ridge passes through the village. The entire village of Oak Park lies on the shore of ancient Lake Chicago. Ridgeland Avenue in eastern Oak Park marks the shoreline of the lake. Additionally, one of North America’s four continental divides runs through Oak Park, causing a slight rise running north-south through the village.

When the first post office was set up, it could not use the name Oak Ridge as another post office was using that name in Illinois, so the post office chose Oak Park. By 1850, the Galena and Chicago Union Railroad was constructed as far as Elgin, Illinois, and passed through the settlement area. Families flocked out of Chicago following the Great Chicago Fire of 1871, with the Village of Oak Park officially breaking off from the suburb of Cicero in 1902.

Property in Oak Park was desirable as it was a “highland” area with closest access Chicago and soon become inhabited by well-to-do families looking to escape the soot and smog of the swampy city.

A walk around the neighborhood today reveal not only an evolution of Wright’s designs and growing maturity as an architect, but also provide comparisons that highlight the stark contrast of the developing Prairie School style to the existing styles popular at the time. Chief among them being the Queen Anne style, characterized by the gabled roofs, turrets and large wrap-around porches.

A good example of which can be seen below –  the birthplace of Ernest Hemingway built in 1890 by his maternal grandparents and the first home in Oak Park to have electricity. 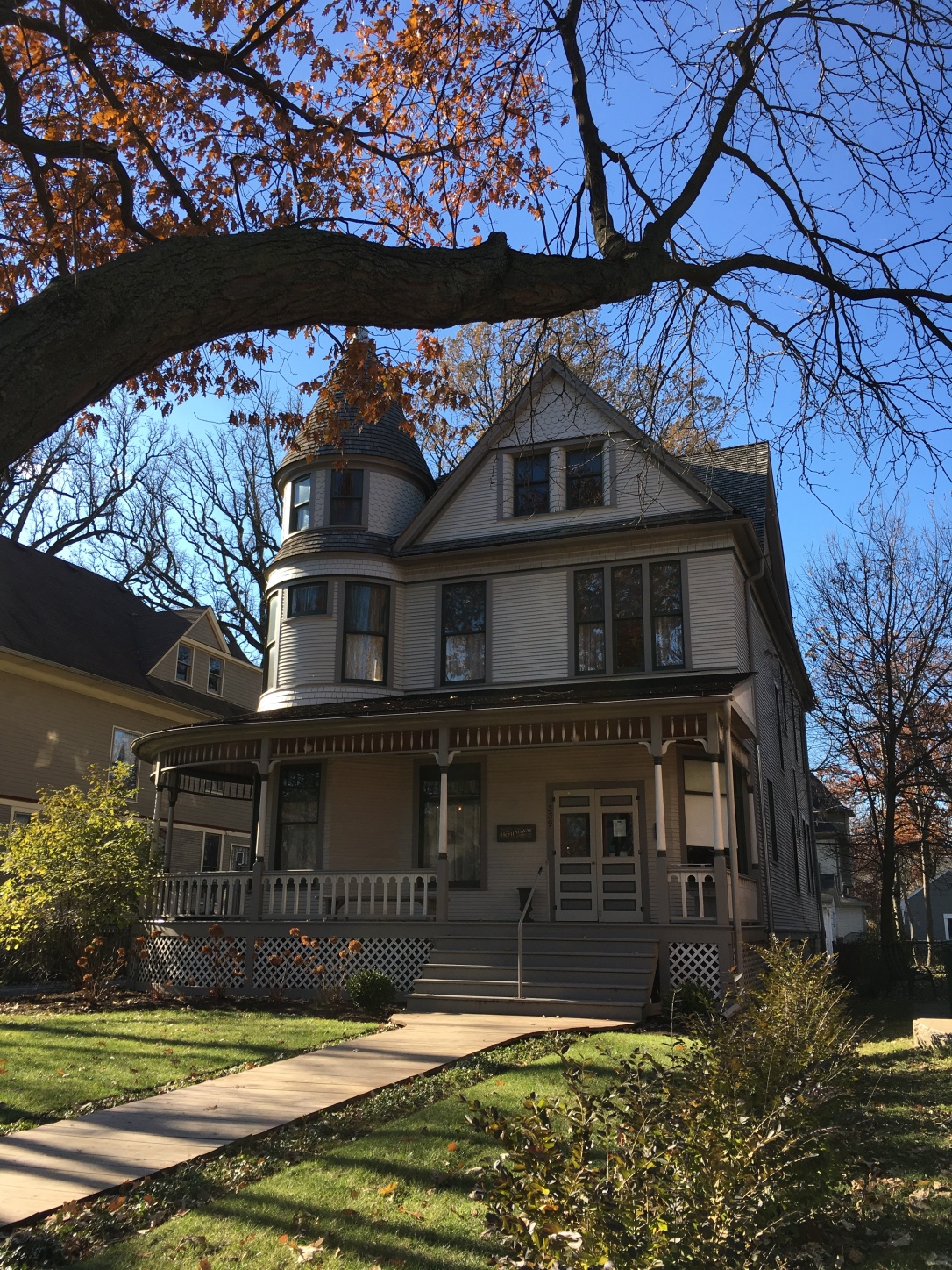 The following lists in chronological order some of Wright’s designs seen in Oak Park.

Originally designed and built in 1895 in the Tudor Revival style, at the request of Nathan Moore, this was never a personal favorite of Wright’s. A fire in the early 1920s allowed the architect to add some Prairie School elements during the home’s renovation. 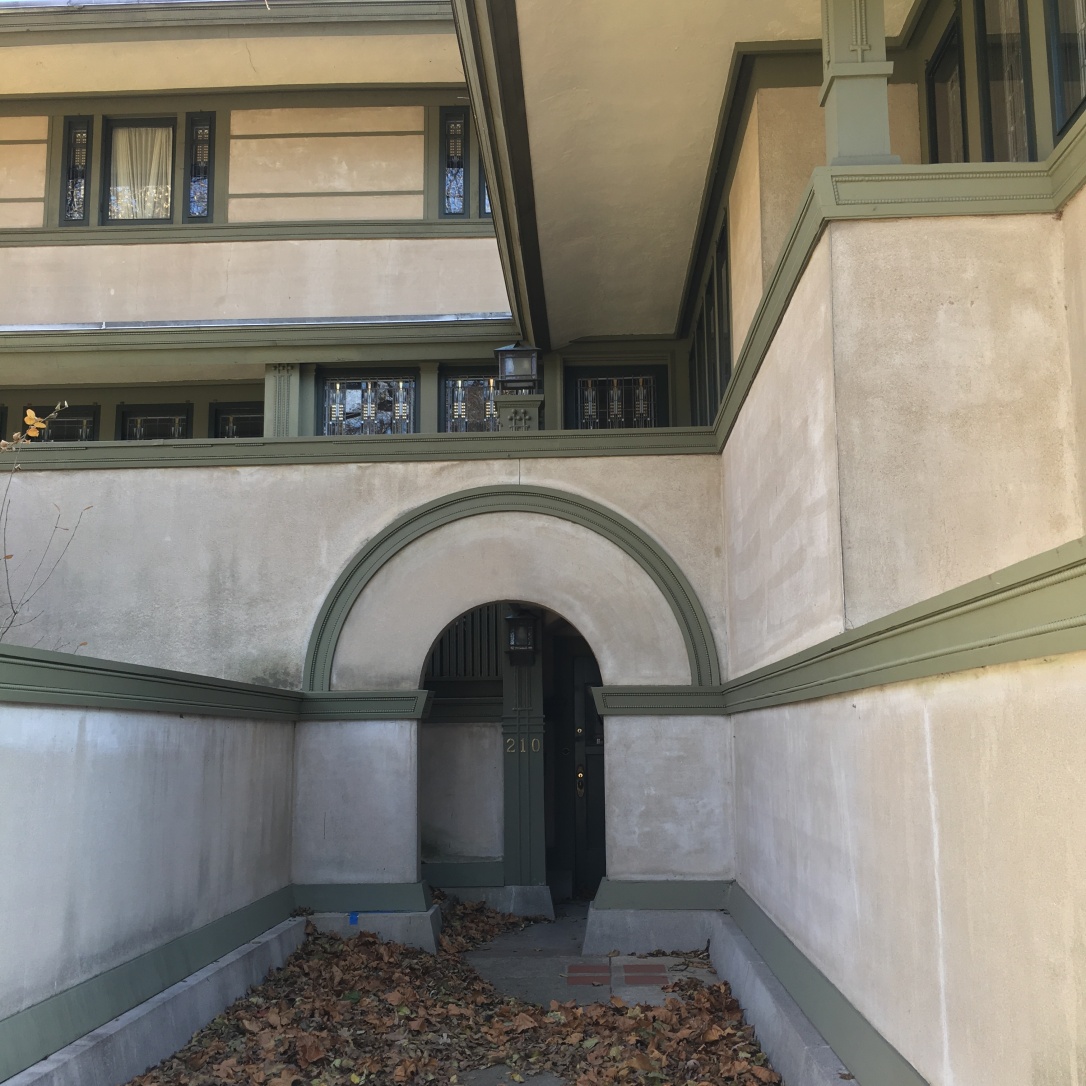 Generally recognized as Wright’s earliest, fully mature Prairie School style house, the patterns that he established with the home would eventually appear in many of his greatest works within the style. Exterior emphasis on the horizontal, with strong detail in the wooden siding and high bands of windows. The roof is low pitched, and features broad eaves. Terraces and balconies extend the living space outdoors. 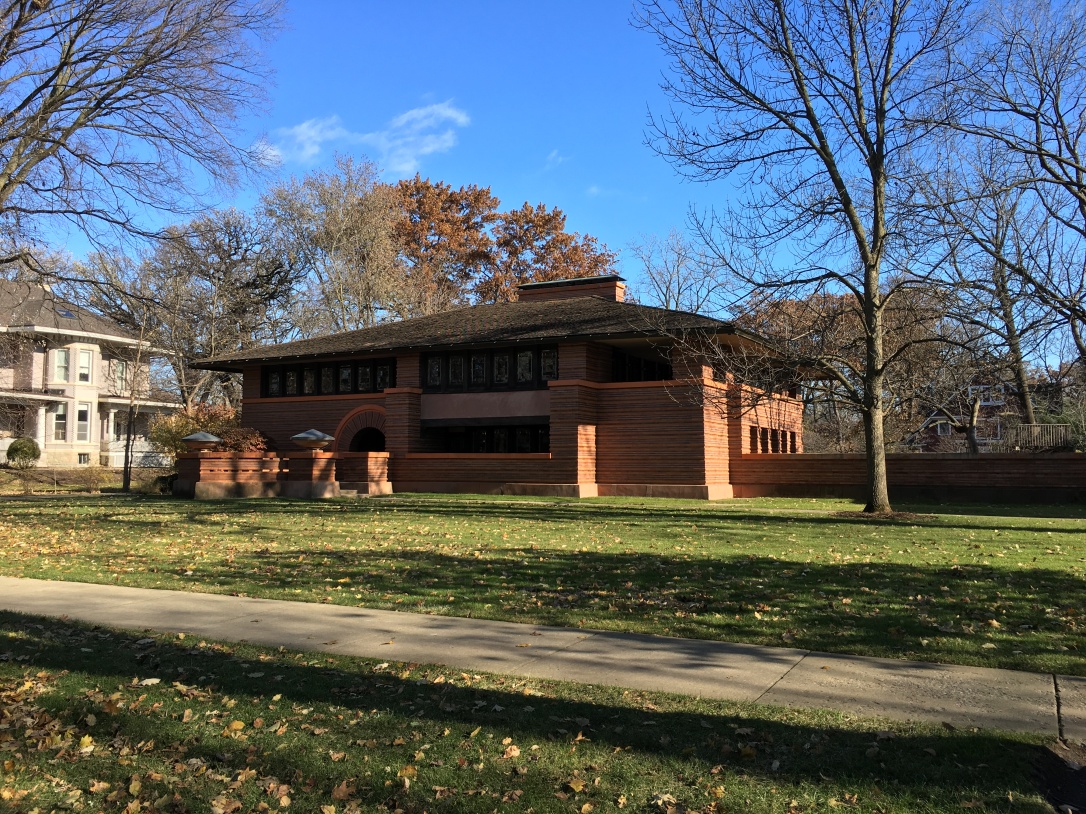 Originally a small Gothic-style cottage, this home was extensively remodeled by Frank Lloyd Wright in 1906 with Wright designing custom furniture to accompany its refreshed look. 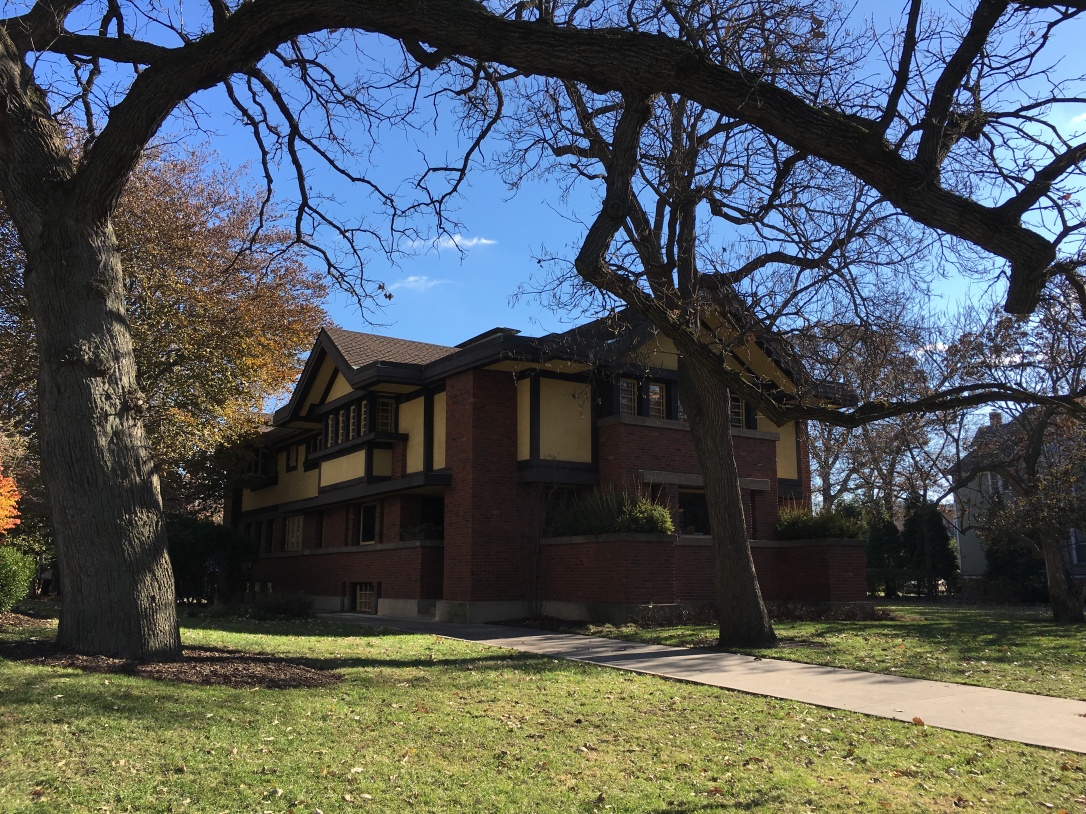 Originally built in 1874, the house was relocated and almost entirely remodeled by Wright in his signature Prairie School style of large windows and clean horizontal and vertical lines. 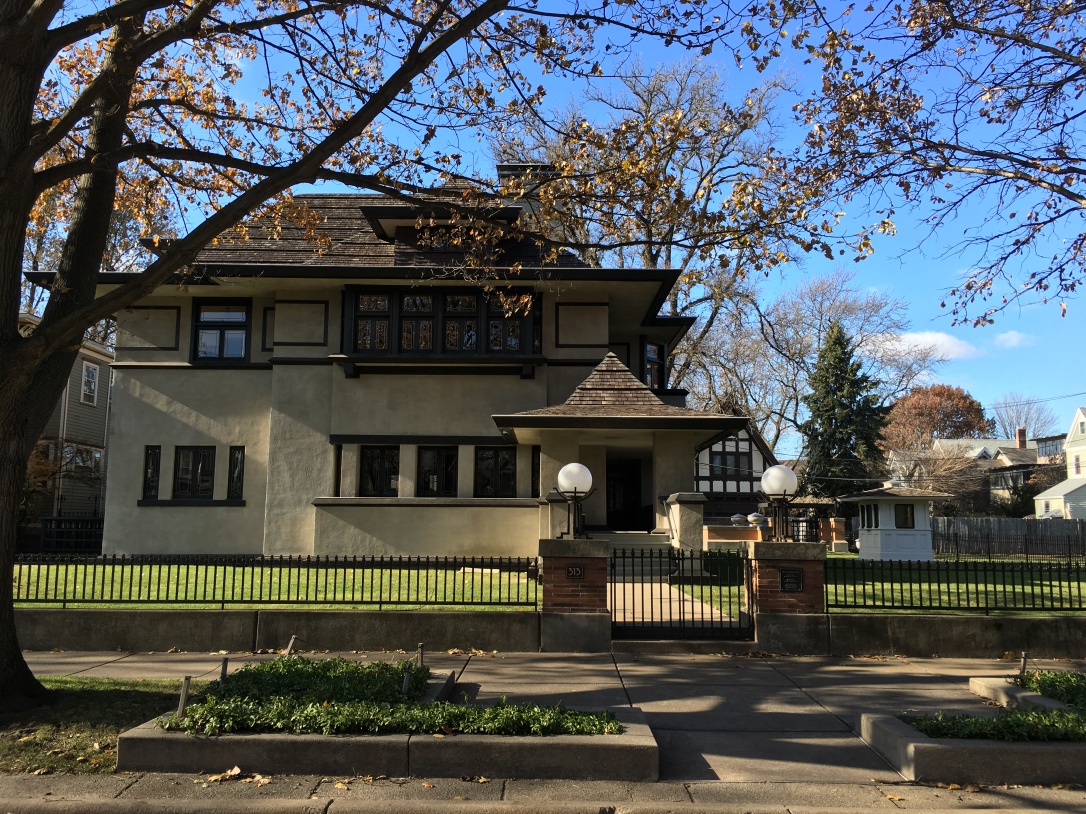 The first of Wright’s designs to feature prominent cantilevered overhangs, this Prairie Style house is seen as an important evolution that would ultimately lead to the iconic Fallingwater. 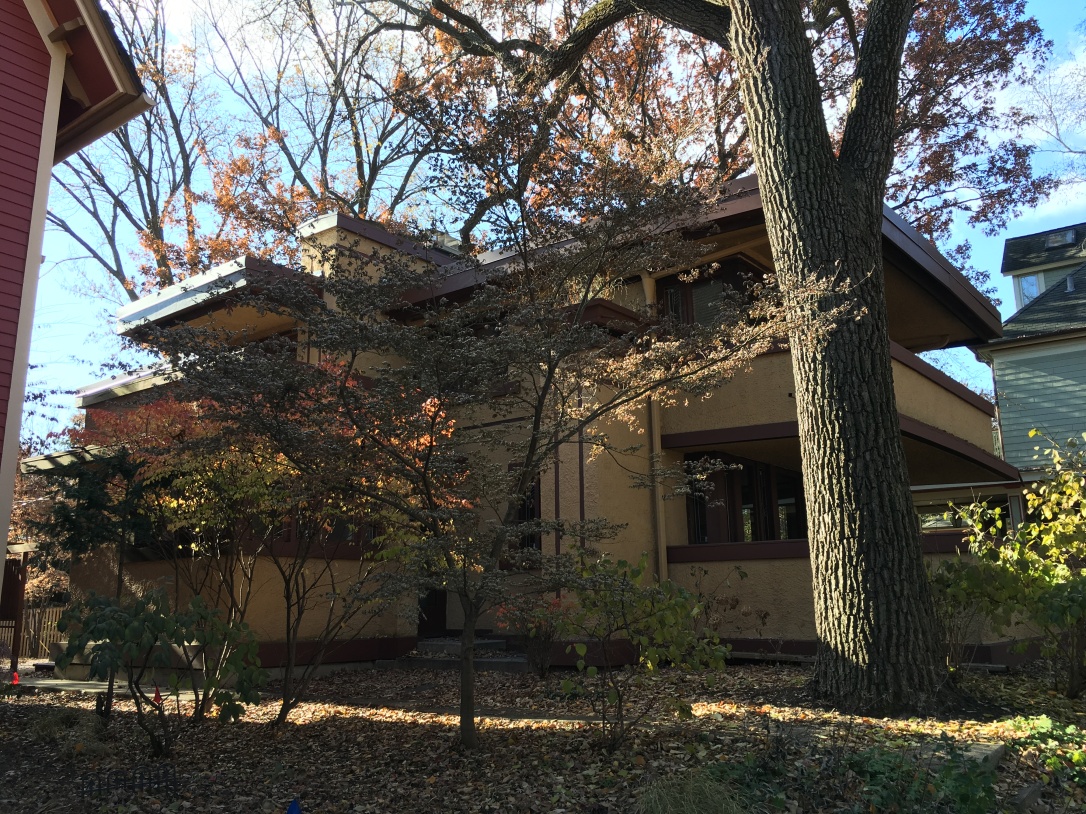