Seated at the busy intersection of Lake St and N. Kenilworth Ave, Unity Temple is considered by many as the first modern building in the world.

In great contrast to the stone churches being at time with a central nave and bell-tower, Frank Lloyd Wright designed for his own Unitarian congregation a boxy Prairie School style building made of exposed reinforced concrete. The included also the design furniture and stained glass for the building. 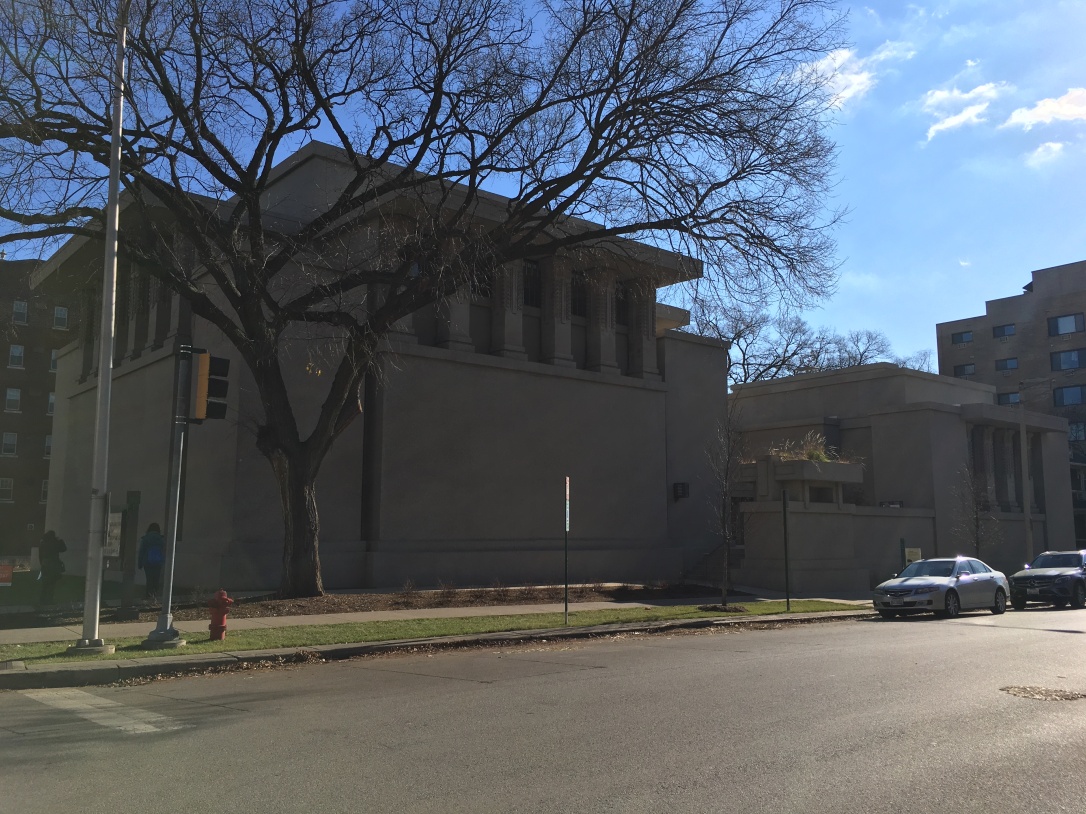 Inside and out, the use of squares and cubes references Wright’s fascination with Mesoamerican design and architecture. 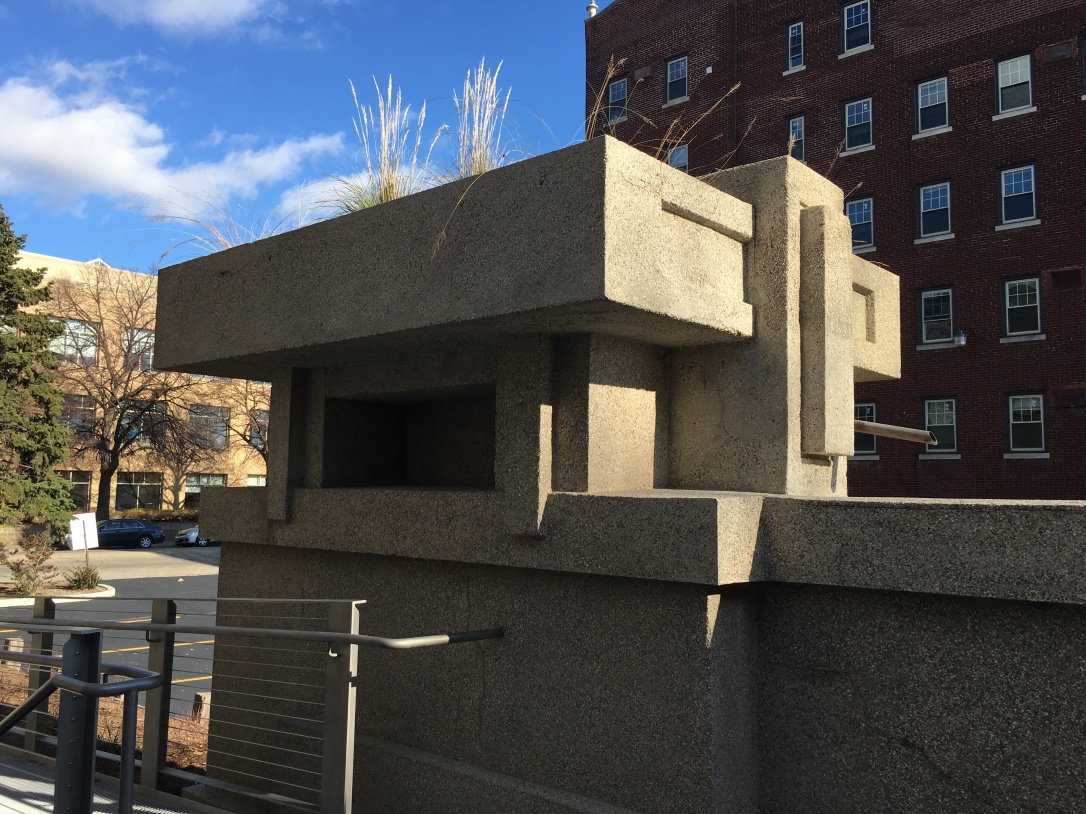 In particular, the stylized wheat design molded on the exterior columns of the building call to mind Mayan carvings. 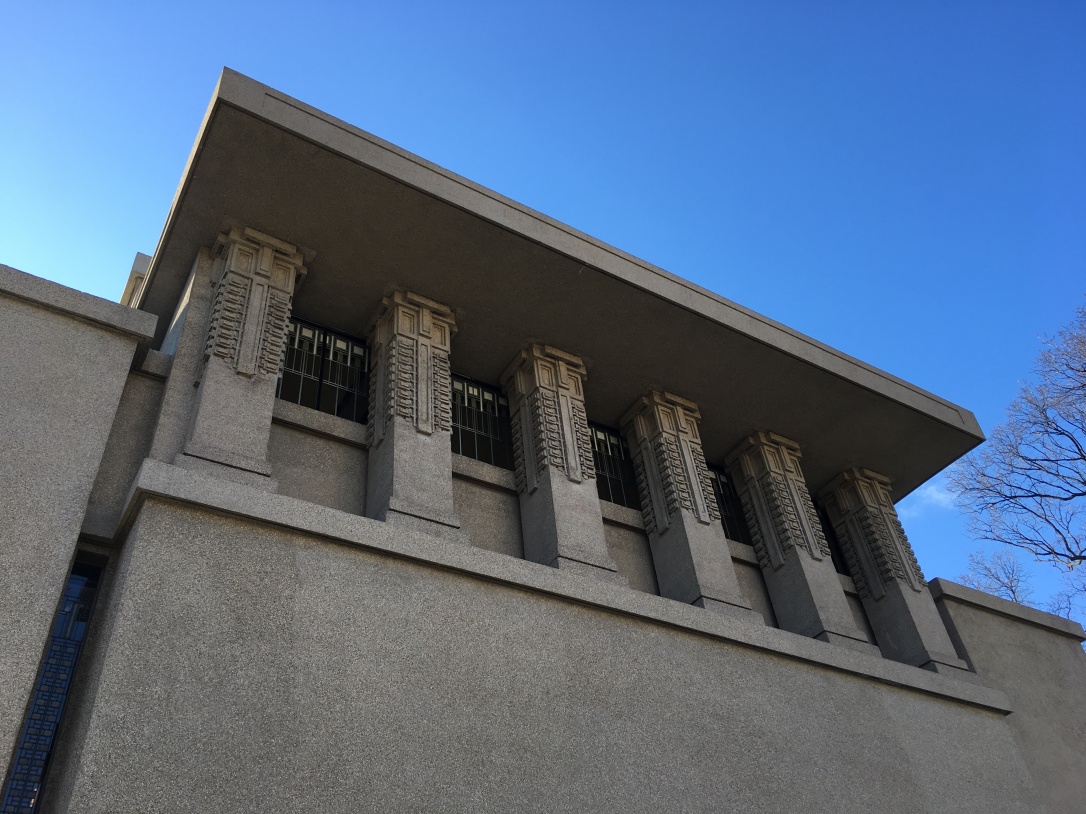 As typical with Wright, to gain entrance one needs to experience a small journey. Here, this means ascending the steps from the street level to reach the main doors concealed within an alcove. In doing so, Wright also succeed in creating a space of peace and tranquility reminiscent of a Japanese Zen garden, sheltered away from the chaos of the streets.

The two entrances on the East and West mirror each other, creating balance and symmetry. 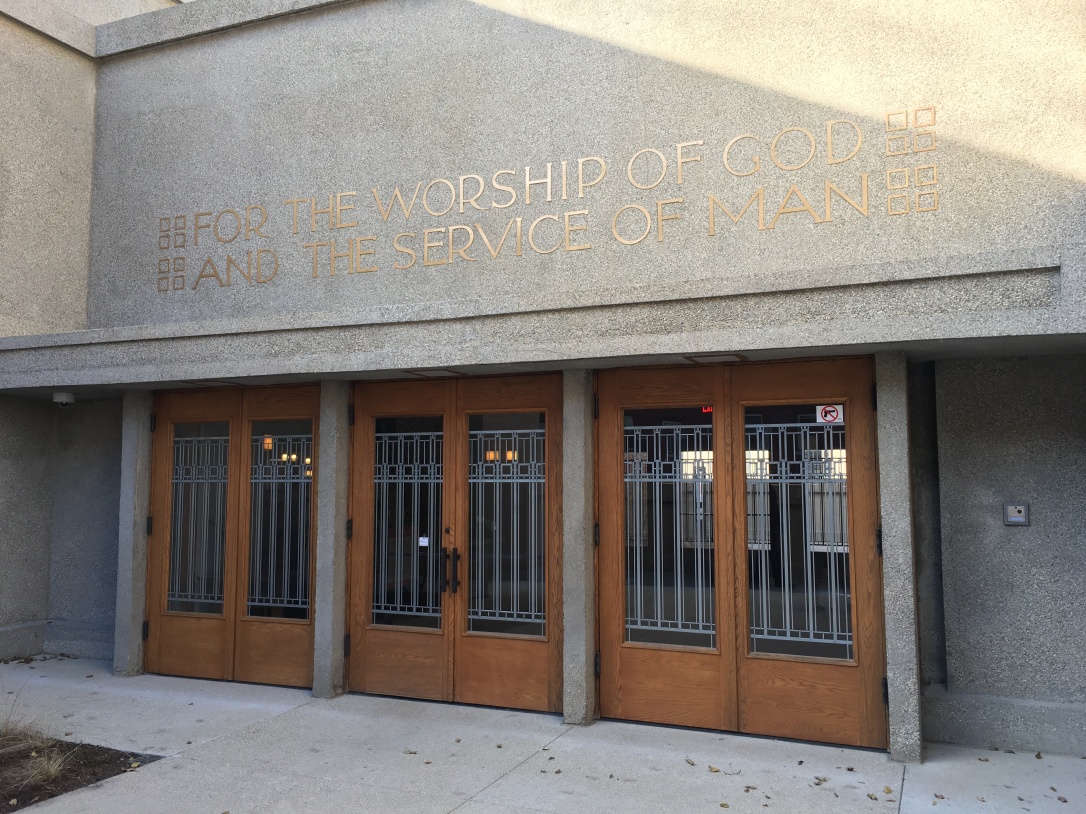 “For the worship of God and the service of Man”. The statement above the entrances boldly proclaims the dual purpose of the building.

To accommodate the needs of the congregation, Wright divided the community space from the temple space through a low, middle loggia that could be approached from either side.

The image below is taken from the balcony of the community space looking out into the middle loggia and the entrance doorway. 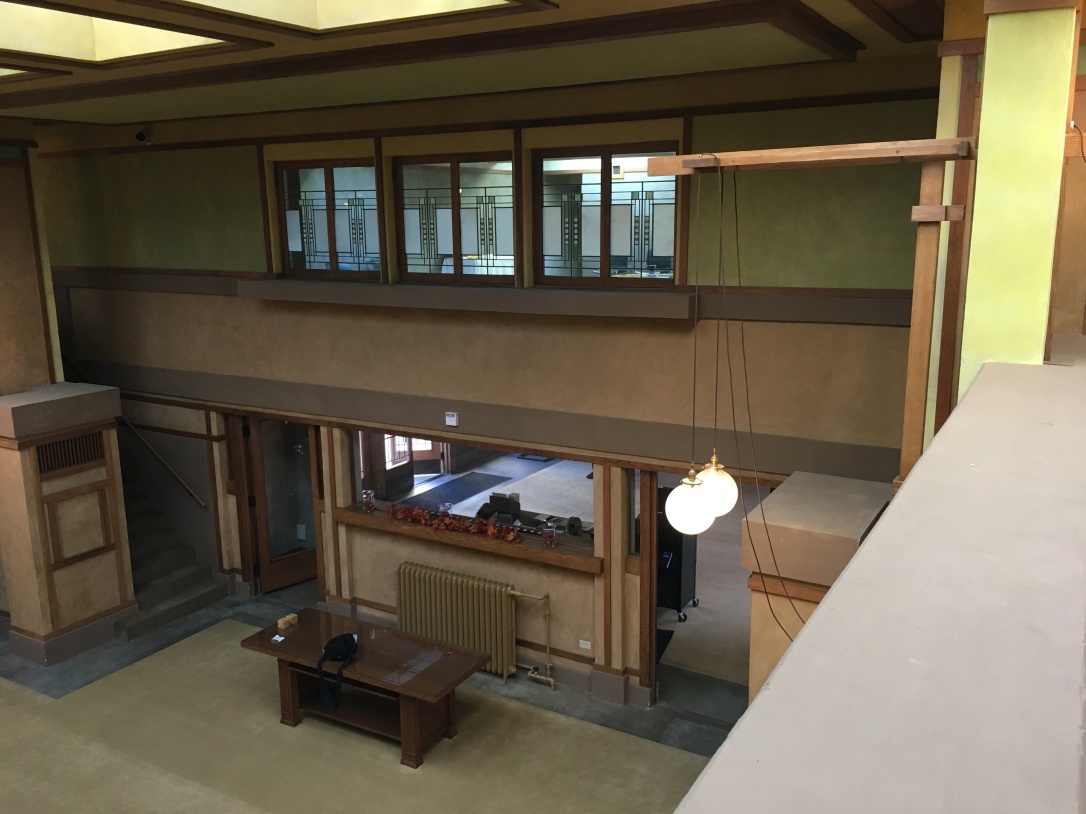 As to be expected of Wright, the ceiling in the loggia space is lowered to enhance the effect of compression and release. The sober colors and minimalist decor add to the solemnity of the space as a place of contemplation and refuge. This also served to help direct the congregant flow towards one of the two main activity spaces and keep noise levels down as no one would willing stay in the loggia for long. 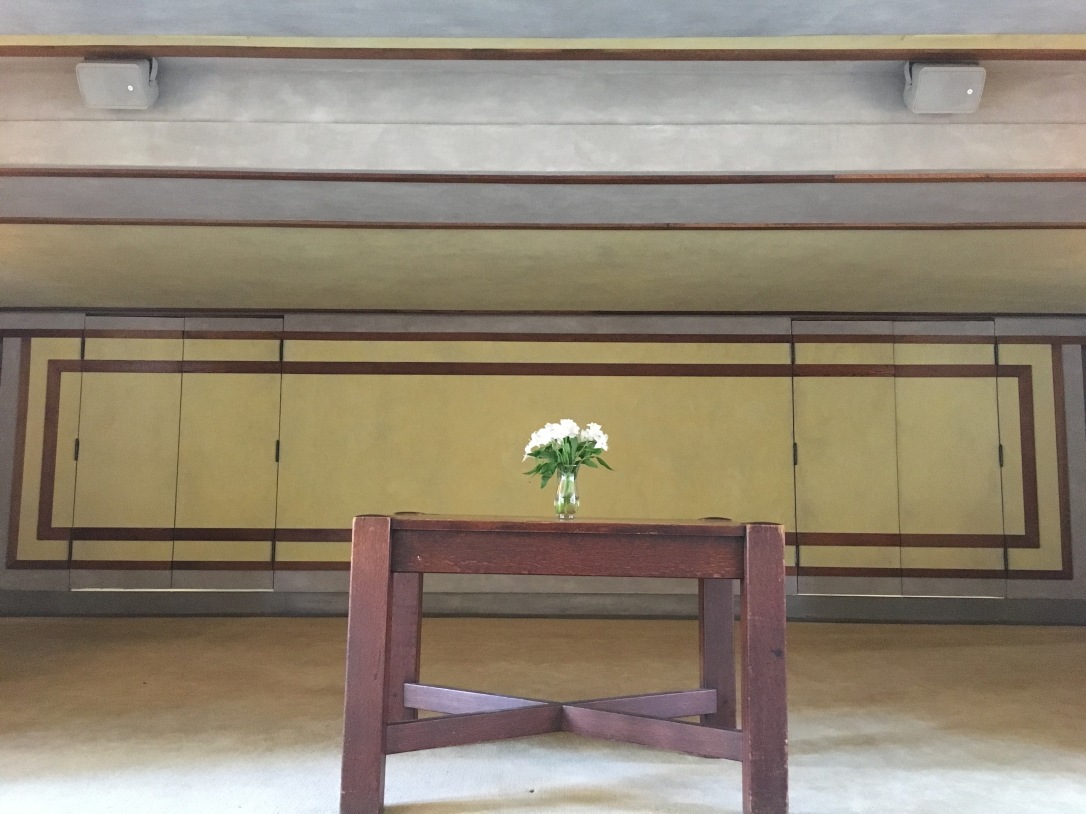 To enter the worship hall, one had to head down a narrow passage.  There were benches for latecomers in the side hallways, placed in a way to evoke the feeling of middle-age cloisters.

Coming out of the passage, one’s eyes would be hit with a flood of light showering upon a wide open space at once grandiose space but also intimate. Natural light filtering down through the glassed ceiling and tall windows on all four sides. 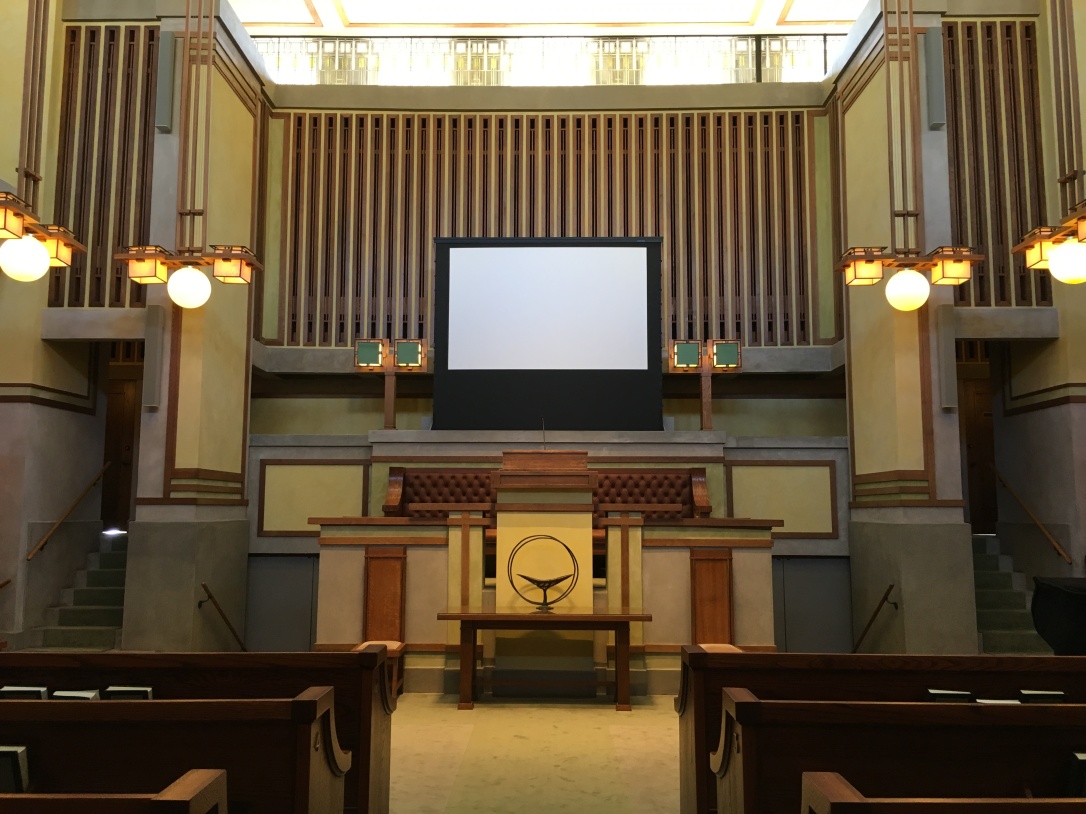 Wright designed the room so that no one would be seated more than 50 feet from the pulpit. Everyone is close to the center, every seat has a good view. 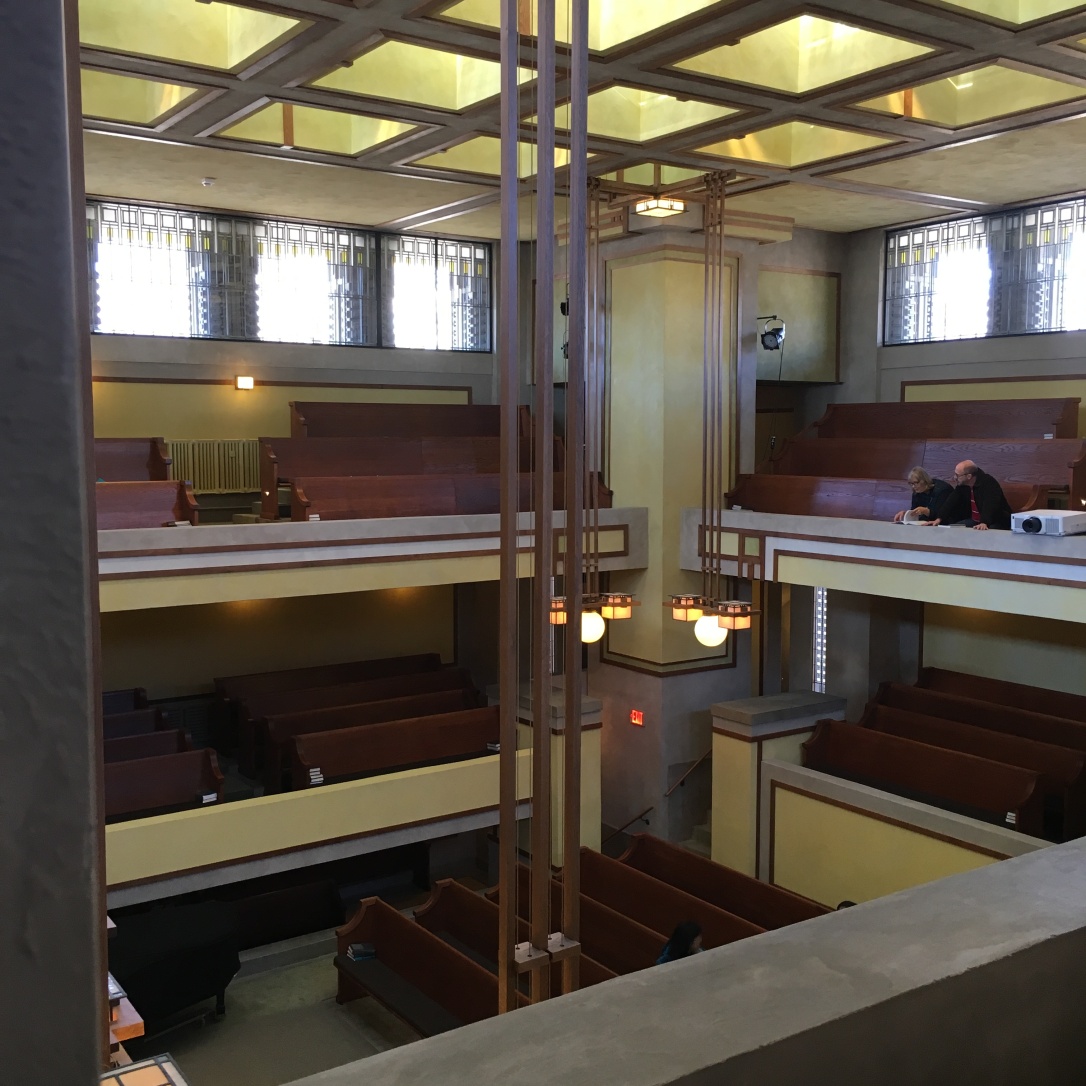 He also strategically placed the hanging lamps to create a space with a space, amplifying the sense of community, of belonging. 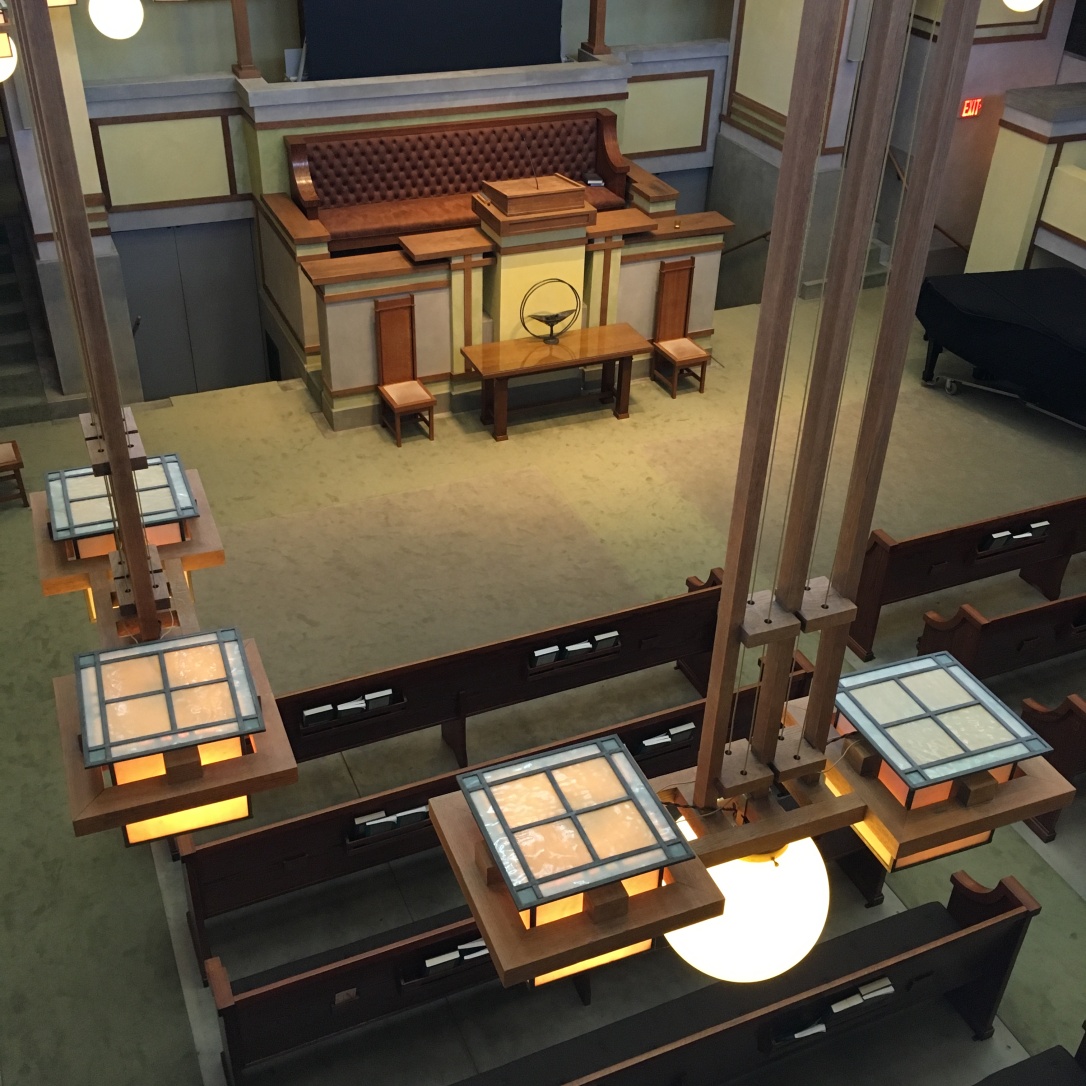 A closer look at the hanging light reveal their resemblance to Japanese lanterns. Wright drew often from East Asian designs as inspiration, incorporating elements compatible to his deep-held philosophy of organic architecture. 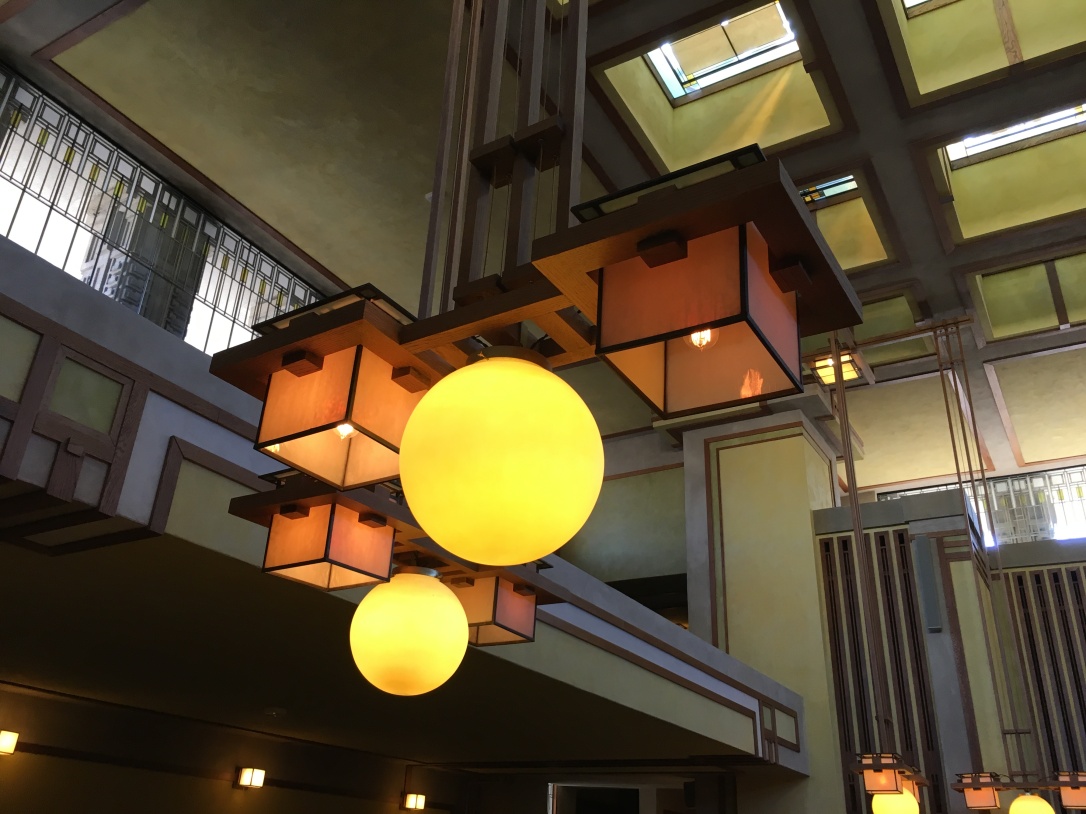 Never one to overlook on the details, seemingly random window slits at the foot of the stairs are placed to preserve the integrity of the design as viewed from inside the worship hall. 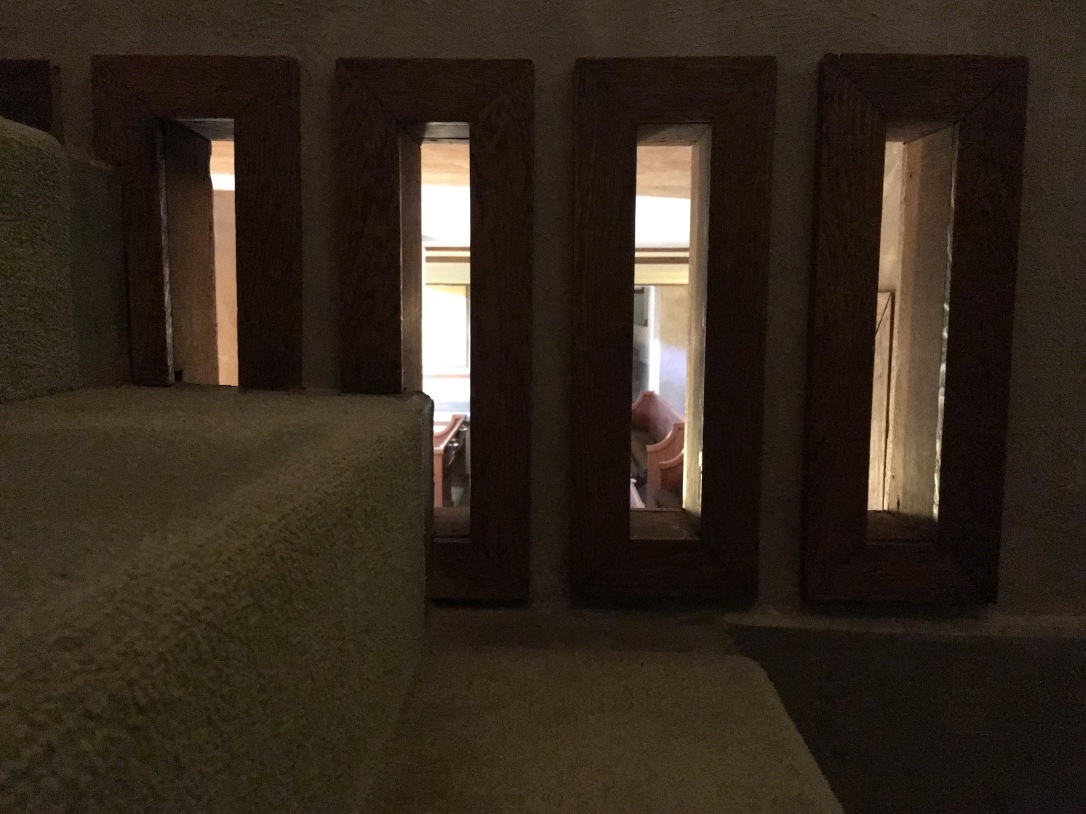 On the other side of the middle loggia was the community space. Also brightly light with ceiling windows and hanging lights. The open balconies on either end were used as Sunday school classrooms, a functionality that is kept to this day albeit with the addition of a glass wall enclosure for safety. 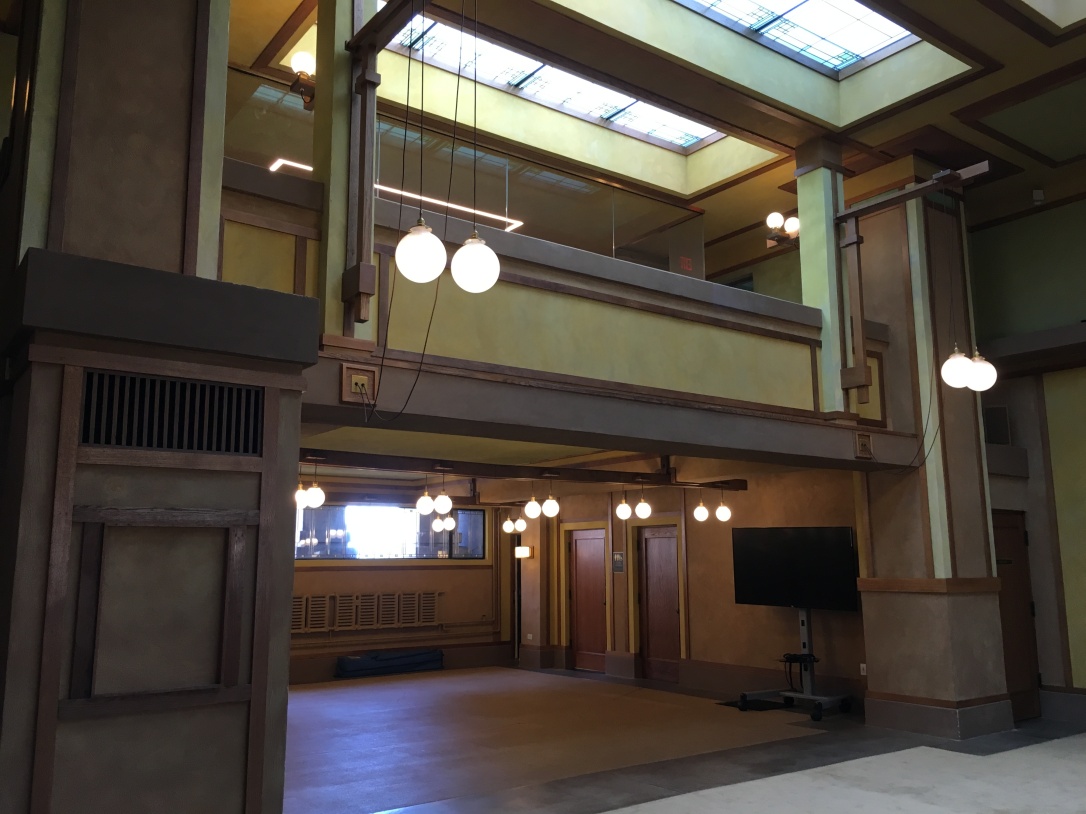 And of course, no Wright building is complete without a central hearth. This grand fireplace was set into the center of the far-side wall of the community space, serving as the perfect spot for people to congregate around. 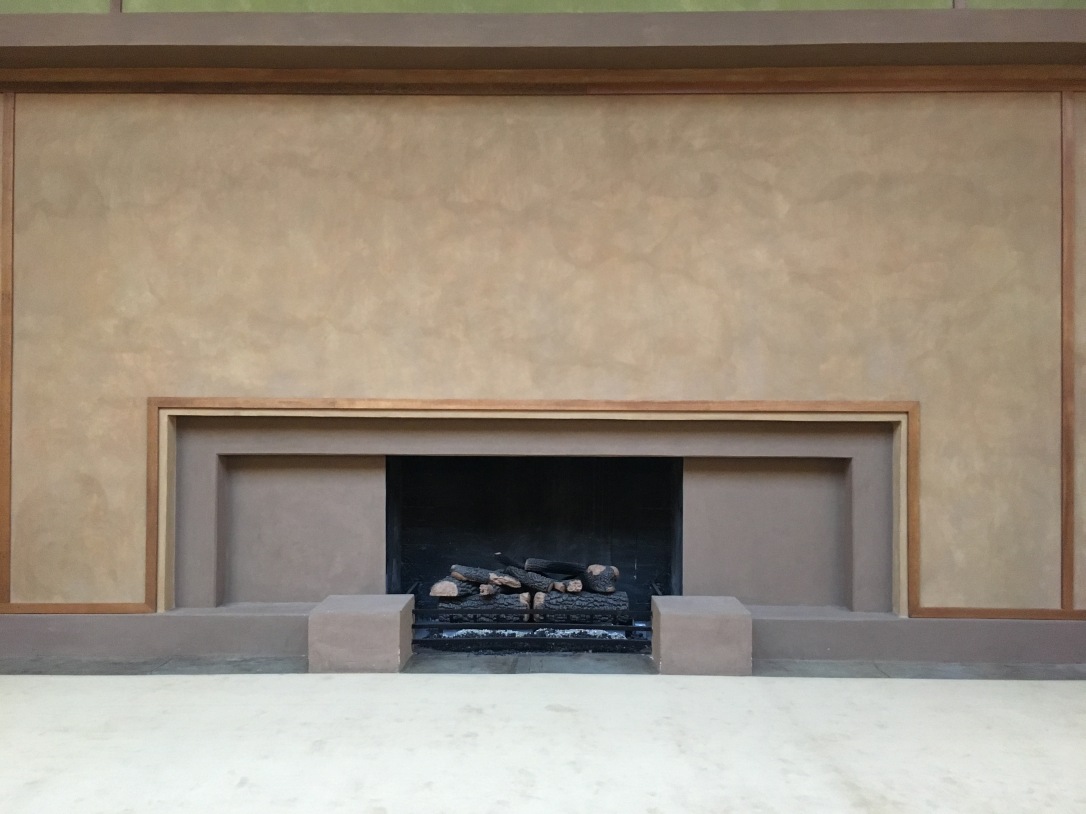