We began our journey in Boston with a 6pm flight on Air Canada via a layover in Halifax, arriving at St. John’s at nearly 2am; picking up the rental car and heading straight for the hotel.

The first thing we learned upon arrival was that the island was on it’s own time-zone – Newfoundland time – 1 hour and 30 minutes ahead of Eastern Daylight Time.

Why the 30? The answer lies in the location of the island and the fact that it was a separate British dominion until the vote to join Canada in 1949 as the 10th province.

The next (same) morning at 8am, we had breakfast at the hotel and then began our erstwhile explorations of St. John’s. 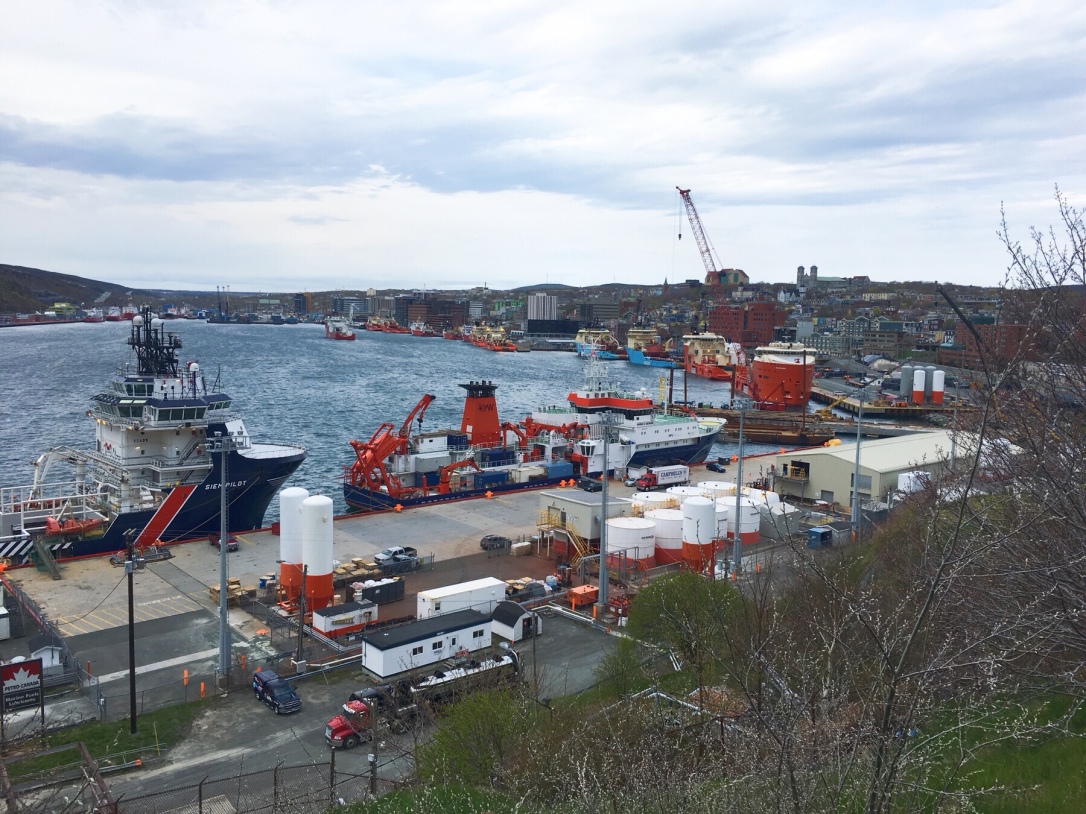 A short walk down Battery Rd led us down to the piers and the outer edge where St. John’s Harbour meets The Narrows and flows out to the Atlantic ocean. 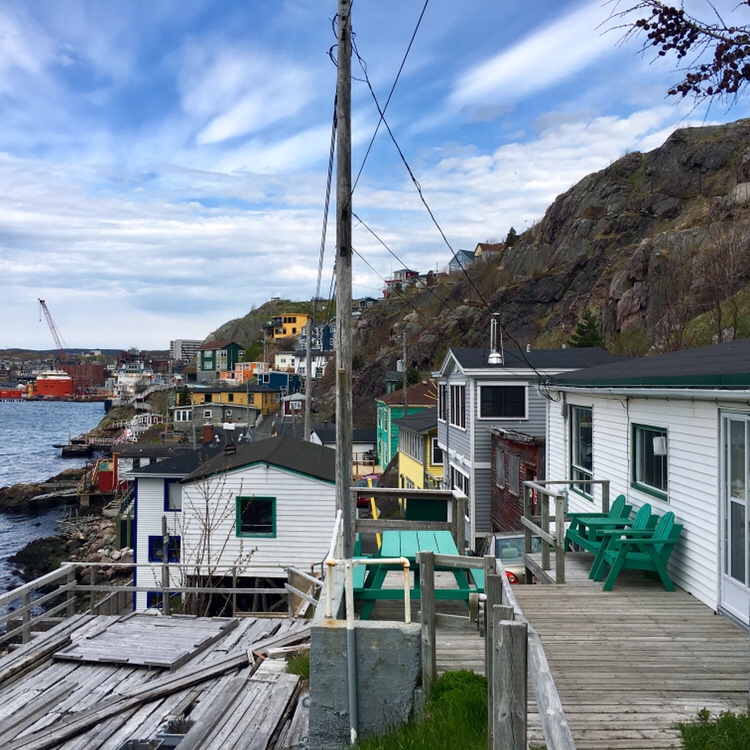 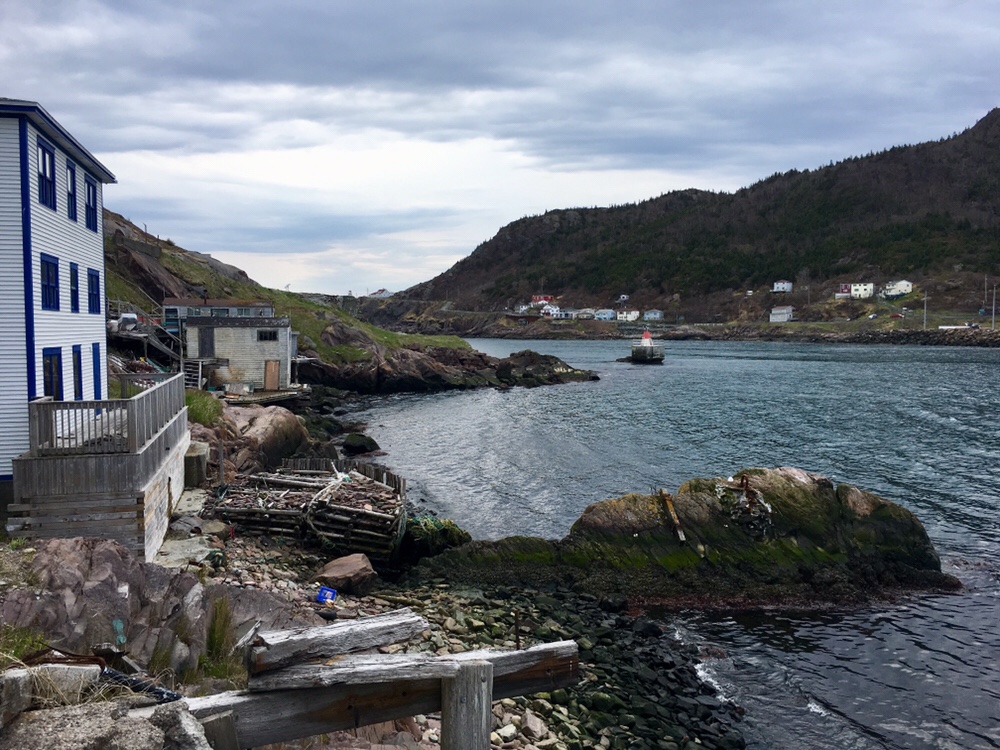 As the North Head Trail was closed for renovations, we turned back to head up the Battery to Signal Hill Walk through the Johnson GEO Park Vista, gaining our first taste of the craggy landscape. 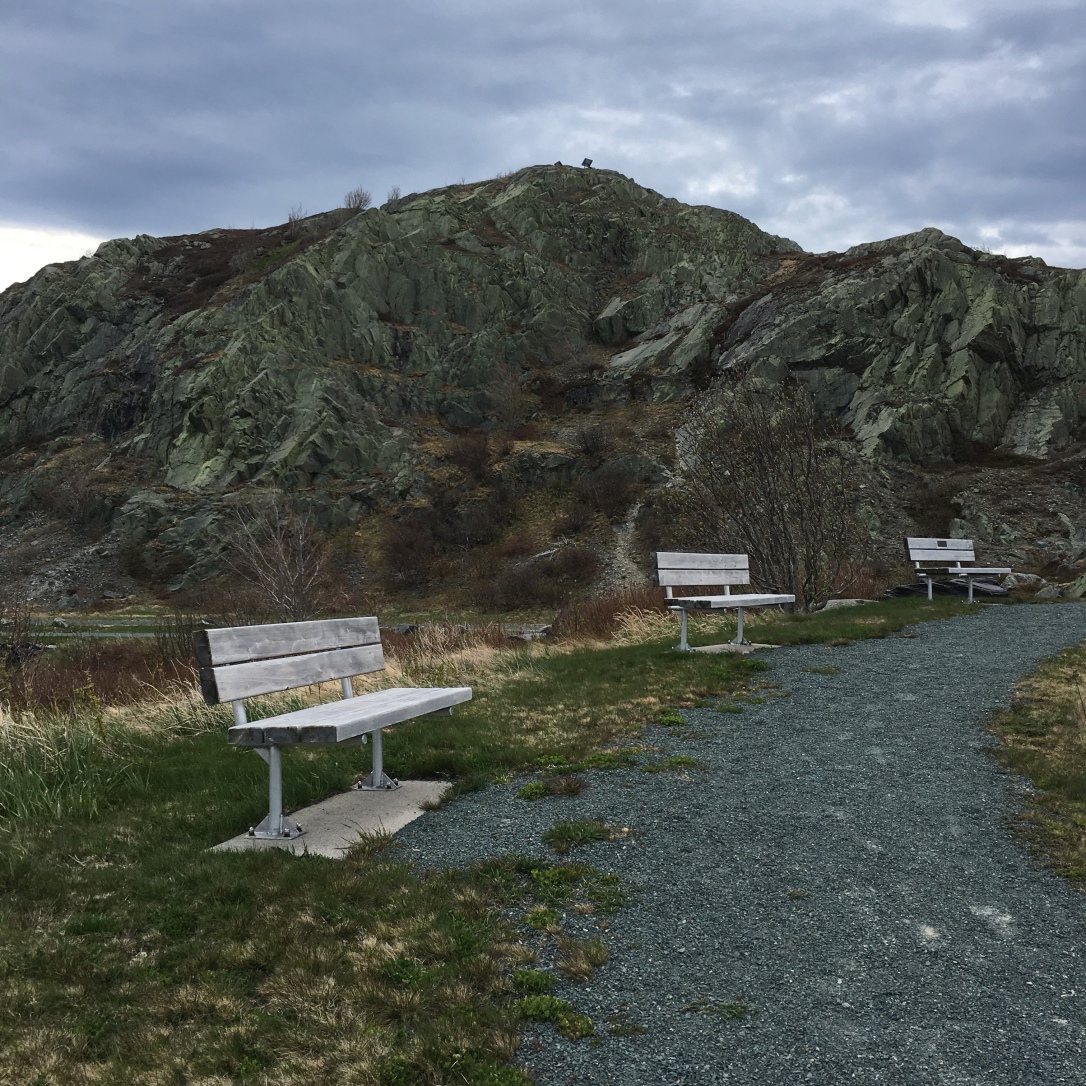 From here we continued up Signal Hill Rd and took the Queen Battery Trail leading to the edge of the ramparts of the Queen’s Battery, in active use from it’s construction in 1796 to up until 1870 in the coastal defense of St. John’s.

Here, we stood in awe before the dramatic view of The Narrows spilling out into the Atlantic Ocean.

Continuing on, we took a moment to look back and soak in full expanse of St. John’s Harbour below. (The gray building in the center on top of the hill is the Queen’s Battery Barracks which once housed up to 19 men.) 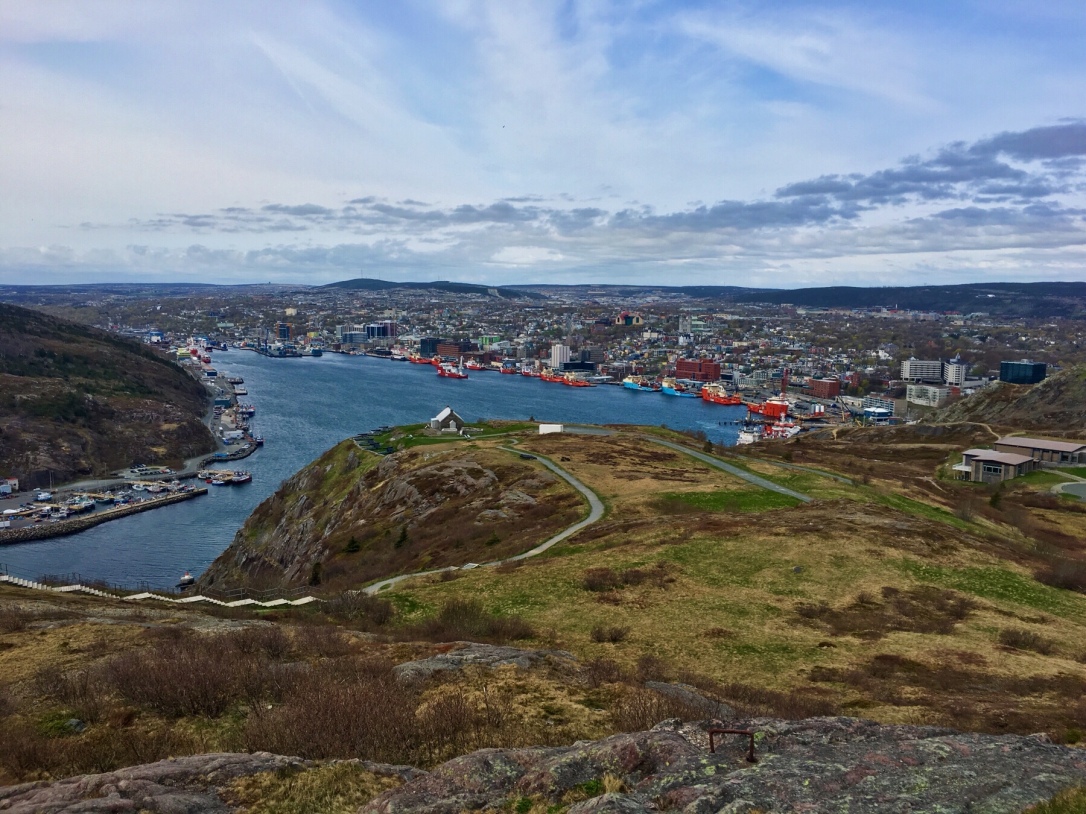 Continuing up Signal Hill, we arrived at the foot of Cabot Tower. Construction began on the tower in 1897 to commemorate both Queen Victoria’s Diamond Jubilee and the 400th anniversary of John Cabot’s landfall in 1497. The building was officially opened in 1900 and used for flag mast signalling – different flags would be hoisted up to communicate with incoming ships and also notify merchants eager to carry out trade with the impending arrivals. It also housed a Marconi wireless station, later moved to St. John’s Airport. On 12 December 1901, the first transatlantic wireless transmission was received by Guglielmo Marconi in an abandoned fever and diphtheria hospital nearby which has since been destroyed by fire (on what is now part of the parking lot). The transmission, in Morse code, originated from his Poldhu Wireless Station, Cornwall, UK. 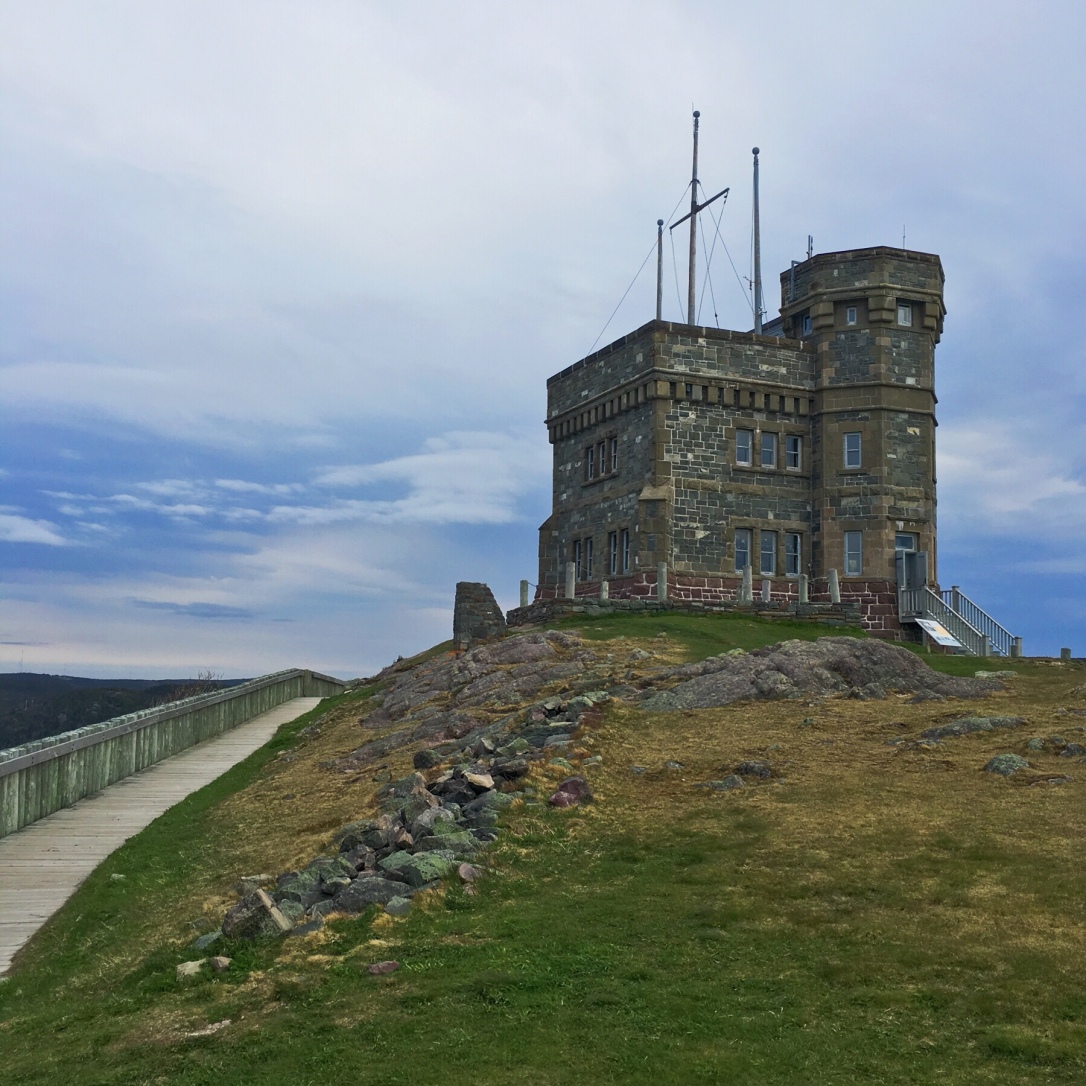 Mid-morning around 11am, we got back into the rental car and started the drive down the Irish Loop towards Port Portugal.

Geographically, St. John’s is located on the north-eastern edge of the Avalon Peninsula.  Though the Portuguese were the first to arrive and gave names to many of the locations, it was the Irish who would establish permanent, root, settlements and leave a significant cultural mark in the region from the music to the food.

Along the way, we drove past many a forlorn looking cottages, seemingly from a time long past, seemingly in isolation in their own little world. Later, in chatting with a local guide, we were told that these are summer vacation homes, perfect for fishing and offering a quiet respite from the hustle and bustle of life in the city of St. John’s. 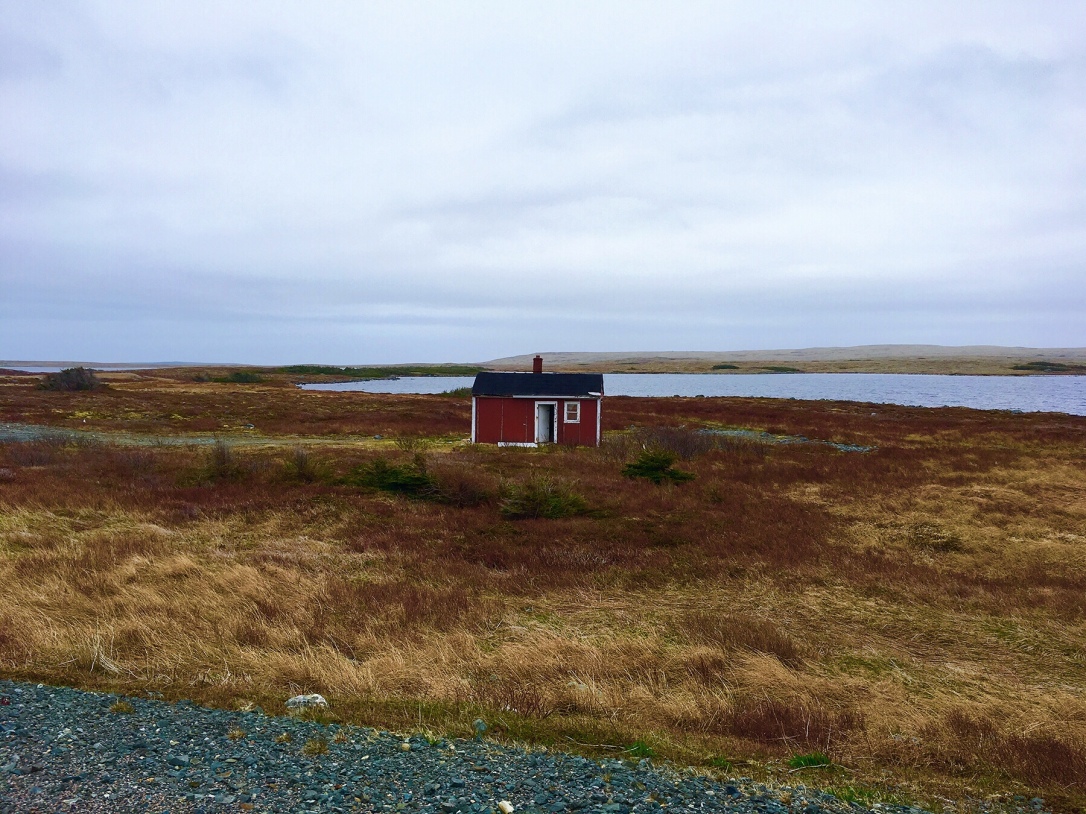 However, the reason for our near 2 hours trek southward was to visit the Mistaken Point Ecological Reserve, a UNESCO World Heritage Site.

Mistaken Point is so named as back in the day, many a ship mistook the southernmost point for having rounded the point of Cape Race on their way to St. John’s, thereby crashing into the treacherous rocks.  There remain some 50 shipwrecks still preserved in the waters off of Mistaken Point. 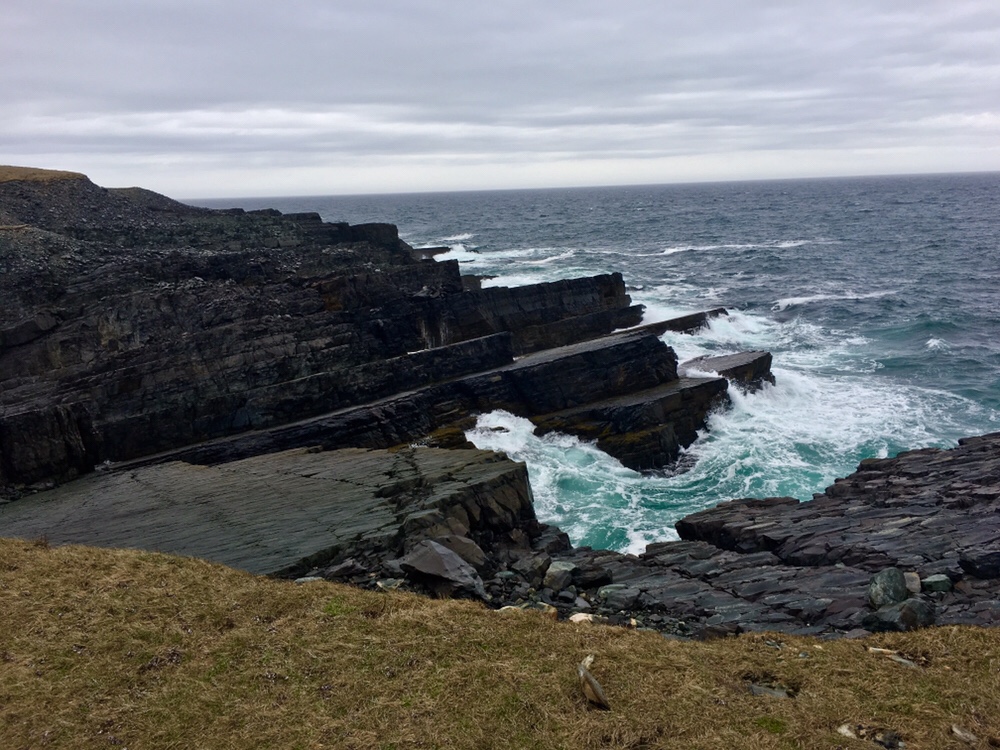 The first fossils were accidentally discovered in 1967 by a graduate geology student and his assistant studying the unique geology of the coastline consisting of flat face rocks pushed up at an angle. The site become quickly recognized to contain some of the oldest  metazoan fossils in North America. Dating of the volcanic ash layer on top of fossils on the site has yielded an approximate age of 565 million years old — making them the oldest fossils of complex organisms to be found anywhere in the world.

Scientists deduce that the fern-like imprints seen below were once leaf-life organisms living upright, anchored to the ocean ground. 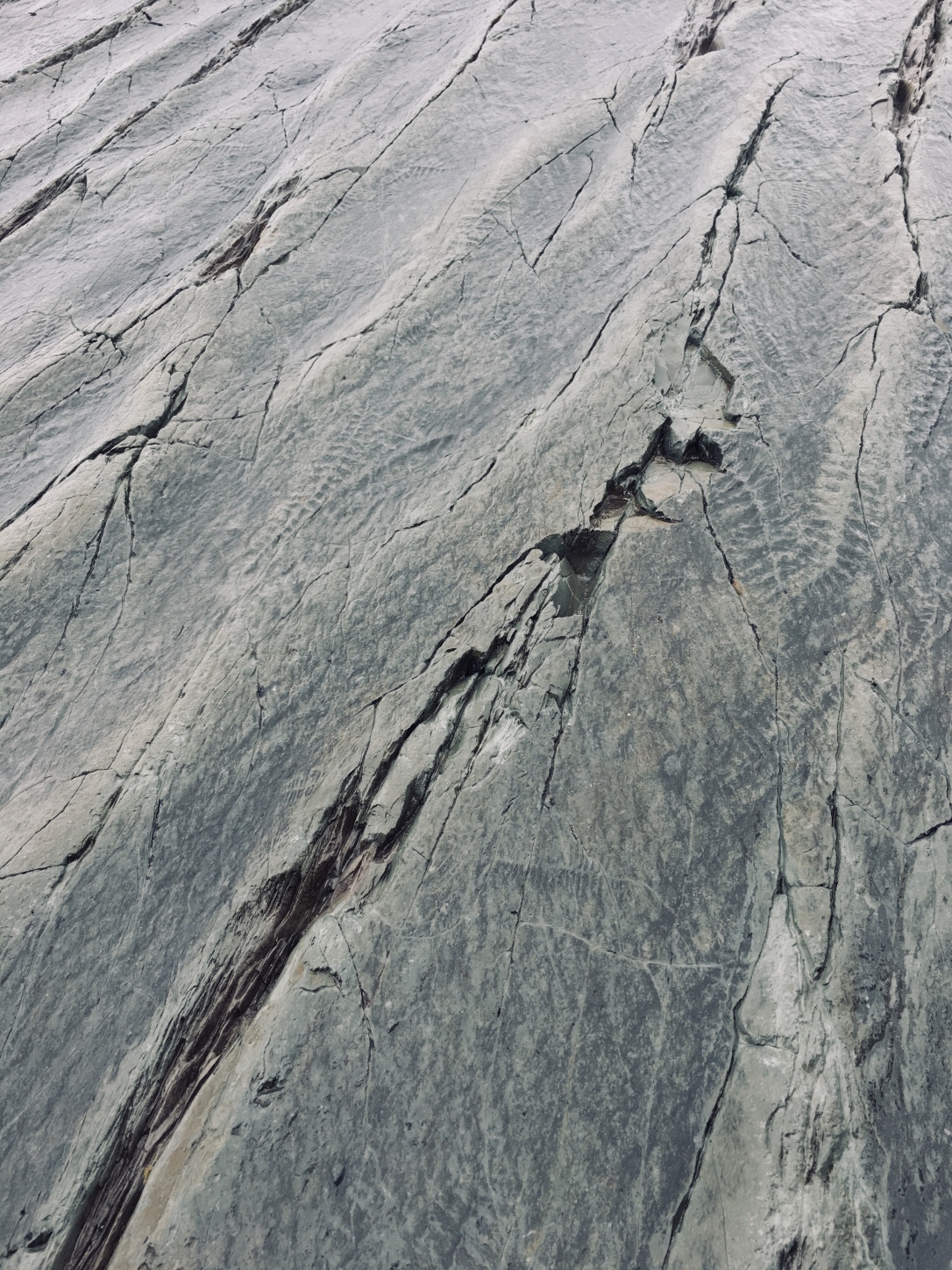 The coastal lands of Mistaken Point is categorized as an Eastern Hyper – Oceanic Barrens ecoregion. This doesn’t mean the land is completely barren. A mesh of ground juniper crawls on the ground, creating an extremely springy ground to walk upon. Amongst other vegetation, there are also berries and rock azaleas which bloom in springtime.

Yet, due to the harsh climate, the only tree that grows here is the Balsam Fir, adapting by growing not upward but sideways mostly clumped on the edges of dipped gullies, partially shielded from the wind. 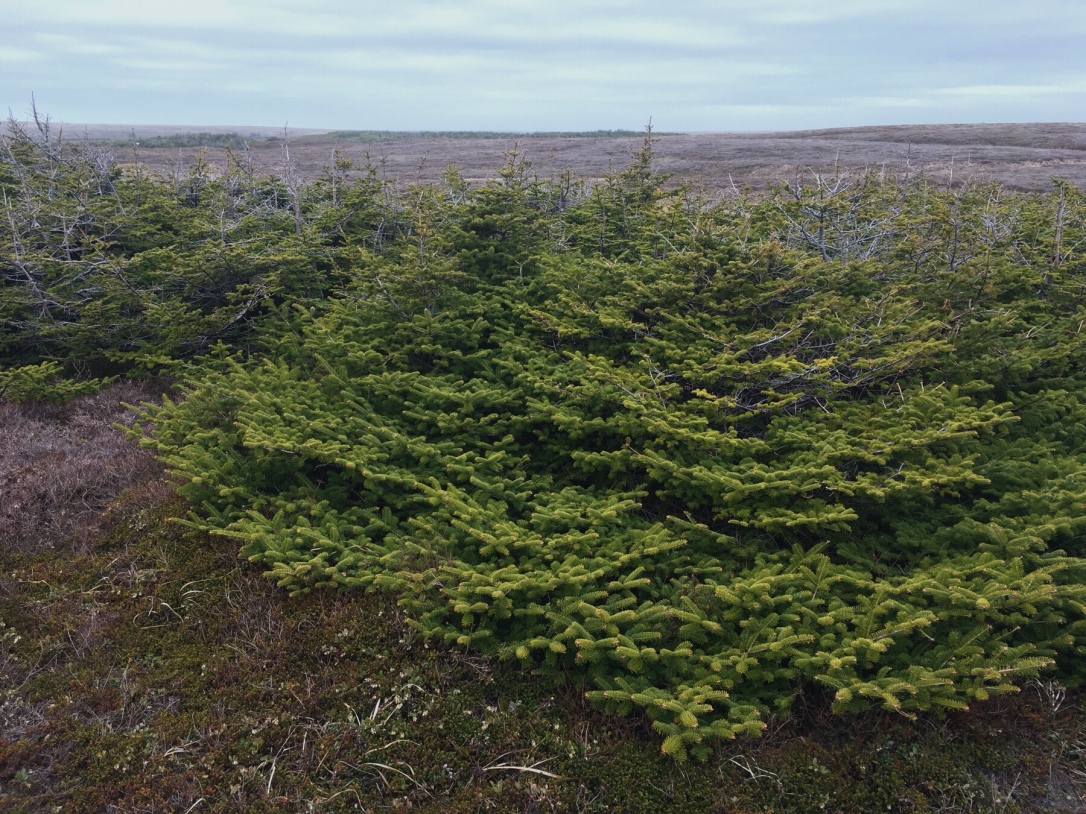 Extending wide, the resulting dense mesh of interwoven branches then creates ideal shelters against rain and wind for animals including  caribou, foxes, and, of course, humans. 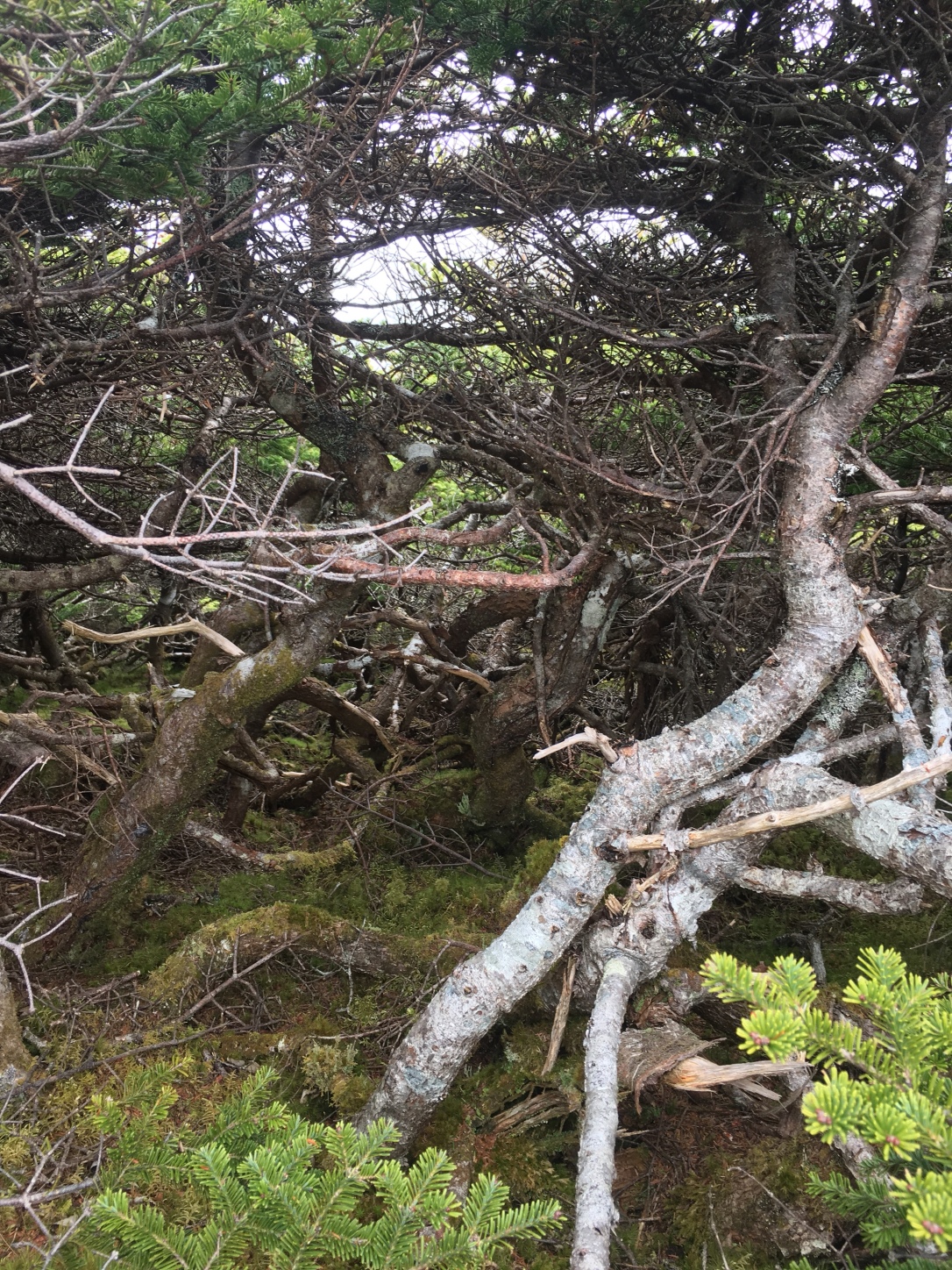 Sadly, we didn’t have time to visit Cape Race Lighthouse, about a 30 minute drive east along the coast, famous for being the first to receive distress calls from the Titanic on its Marconi wireless transmission set. Being the closest at the time, the operator at Cape Race Lighthouse had been receiving and passing along greetings and business messages from passengers to folks on land all over North America prior to the fateful event. 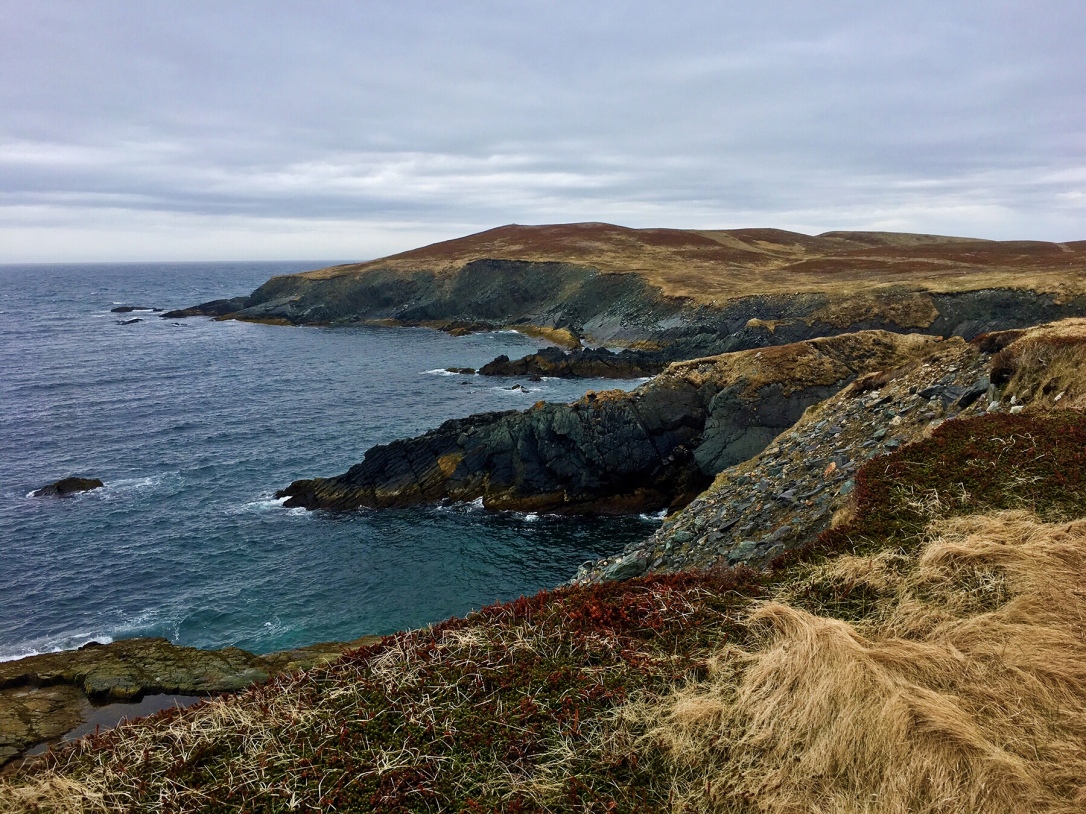 On the drive back, we stopped for a late afternoon lunch at the Squid Jigger Restaurant, recommended by our Mistaken Point guide. 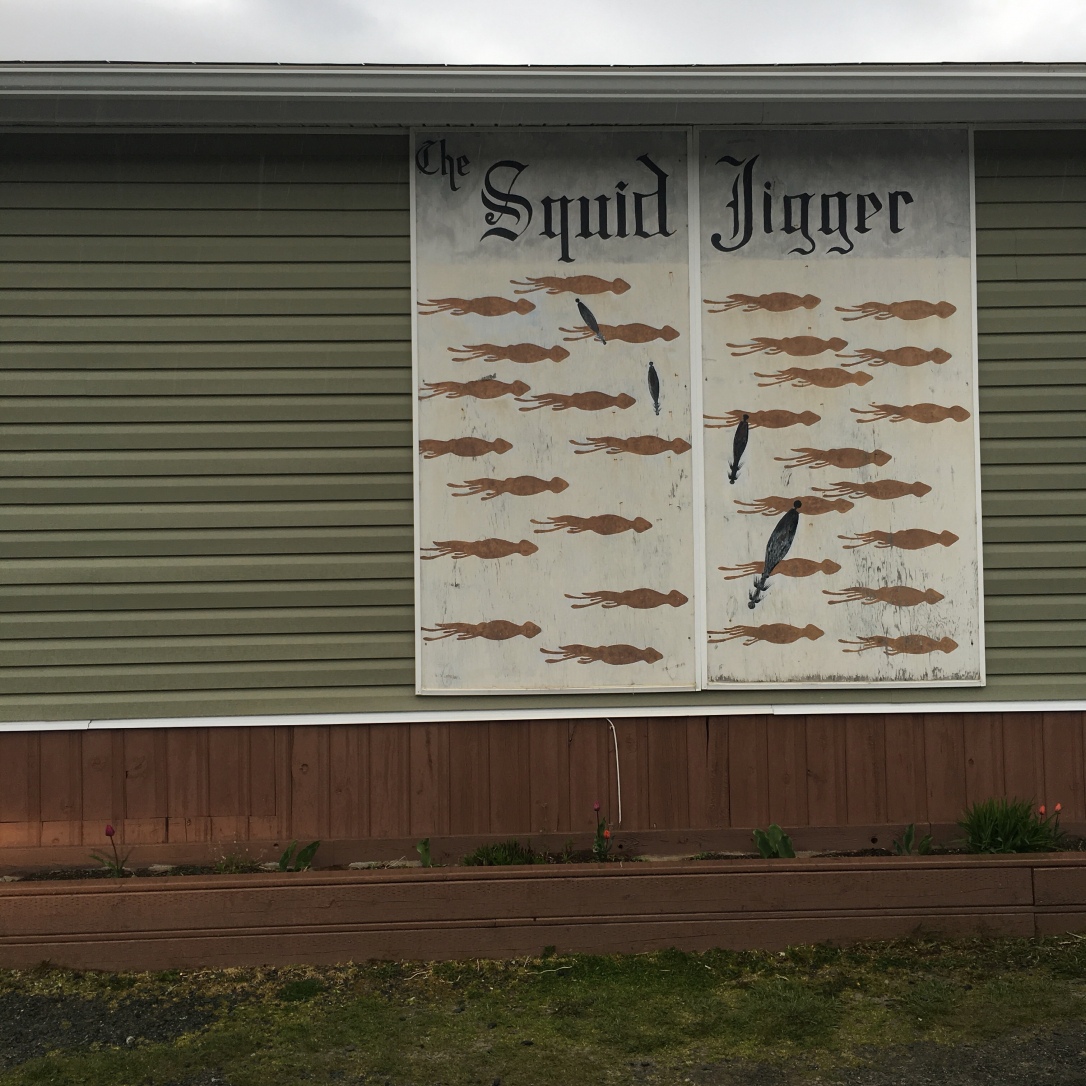 A no-fuss place with a large take-out counter, the restaurants serves up simple Newfoundland fare, including everything cod-fish. I wasn’t in the mood to try the cod tongues, but had instead the cod dinner – perfectly fried but cooked using frozen fillets rather than fresh. 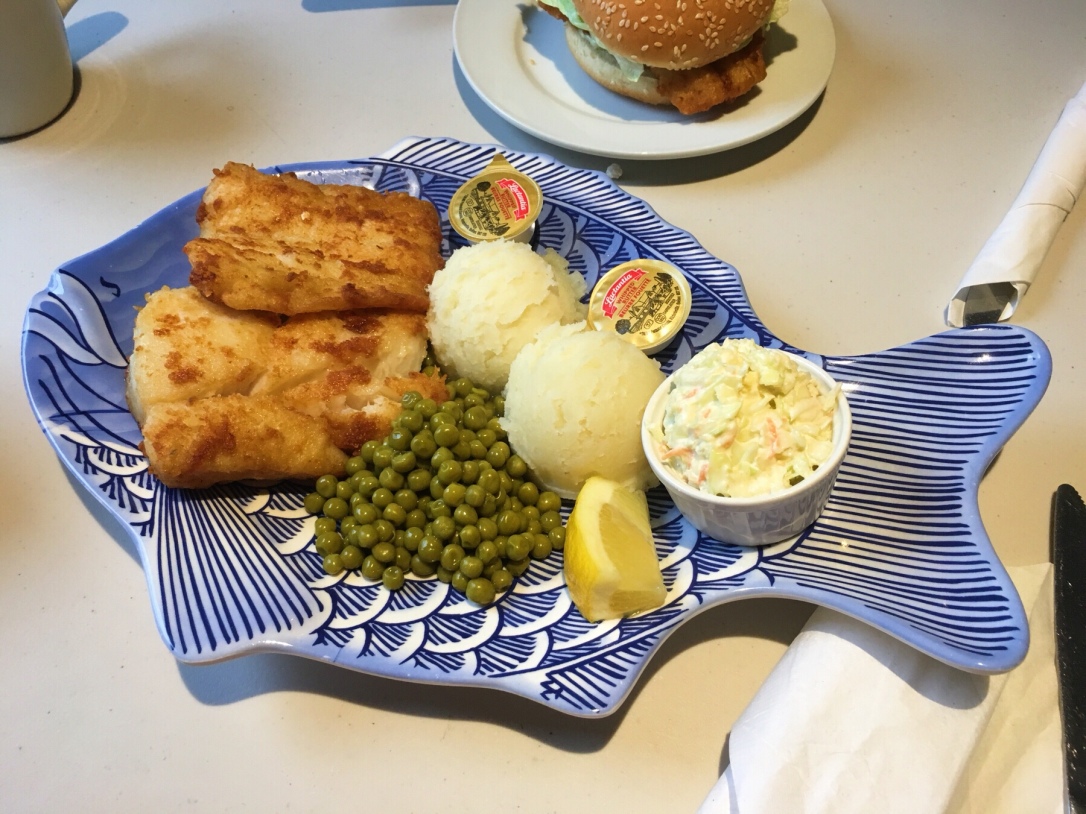 Not entirely surprising as Northern Cod fisheries in Canada were formally banned in 1992. Fisheries still exist but have pivoted towards other seafood. In somewhat an ironic twist, media reports in recent years have commented on how northern cod is now making a comeback and eating the cold-water shrimps that now serve as a main catch for many fishermen and fisheries in Labrador-Newfoundland. 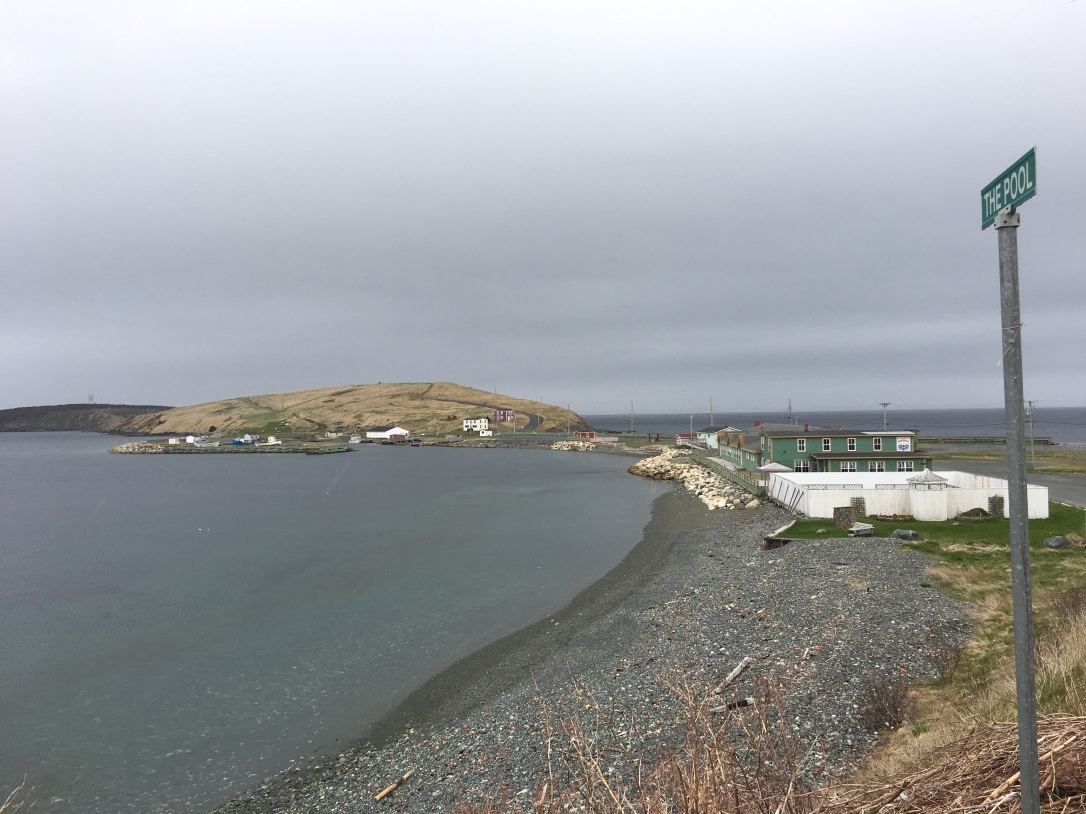 Upon returning to St. John’s, we made a short excursion to Jellybean Row for the ubiquitous brightly colored houses lining the streets downtown. 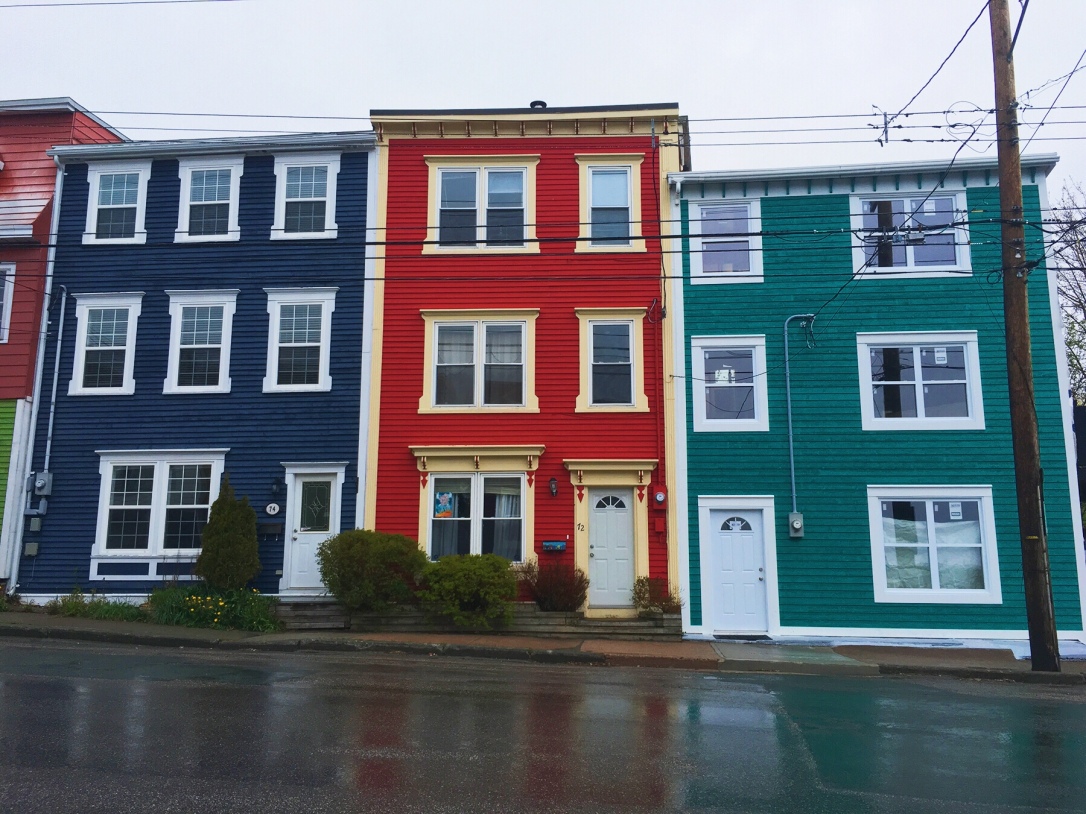 The weather was cloudy and it had started to drizzle, but the cheerfulness of the houses could not be suppressed. 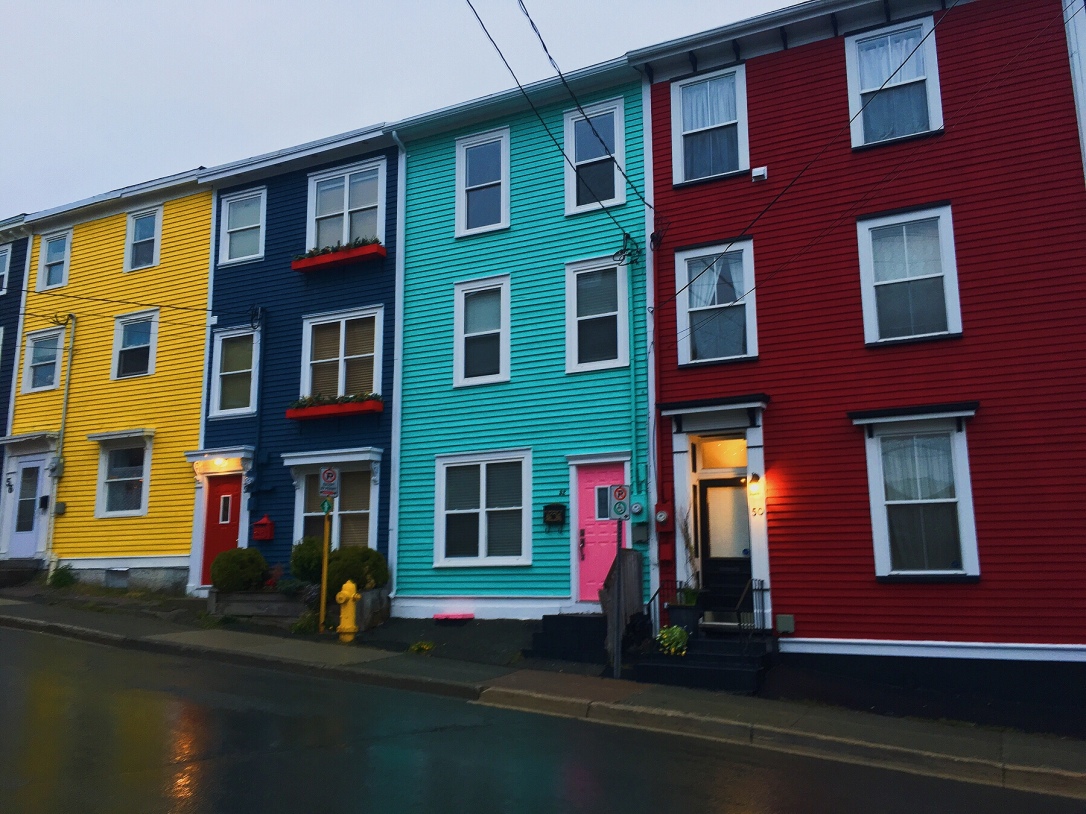 From here we made our way to Quidi Vidi Village, a historic fishing village nestled against a mountain side at the mouth of Quidi Vidi Harbour. 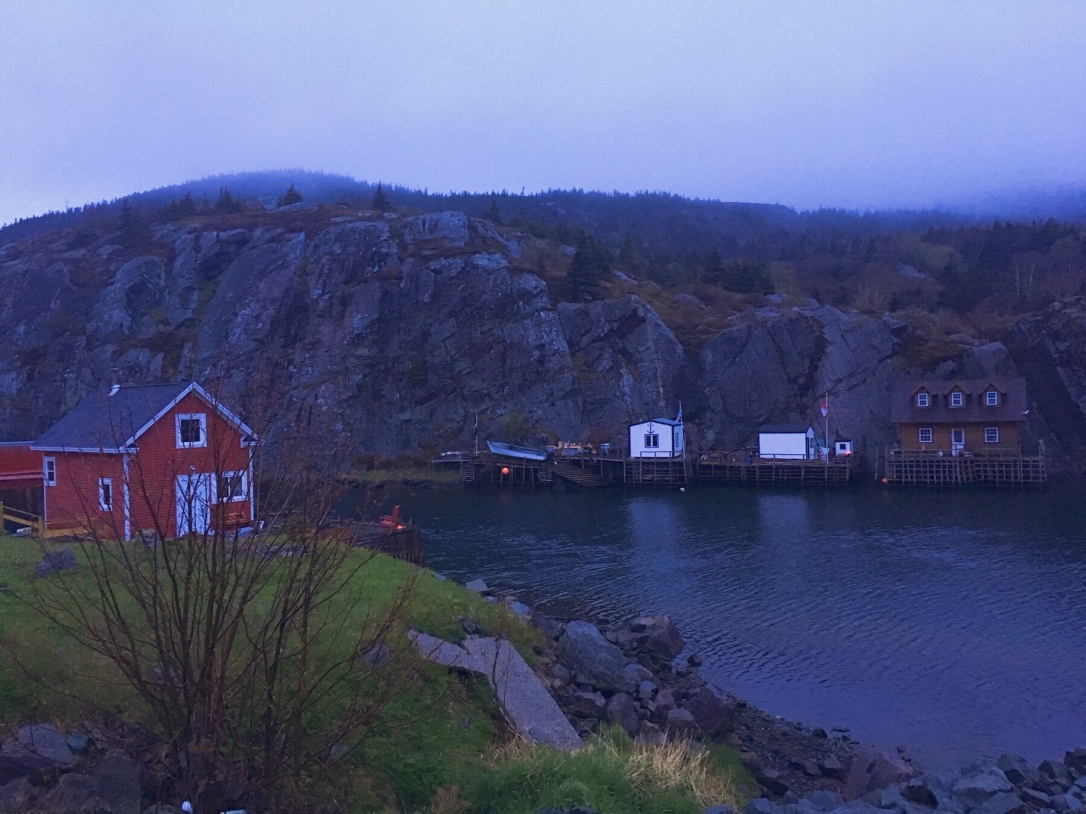 A row of stilted houses still line along the edge of the harbour, harkening to a time long ago past as the sun settled out of sight. 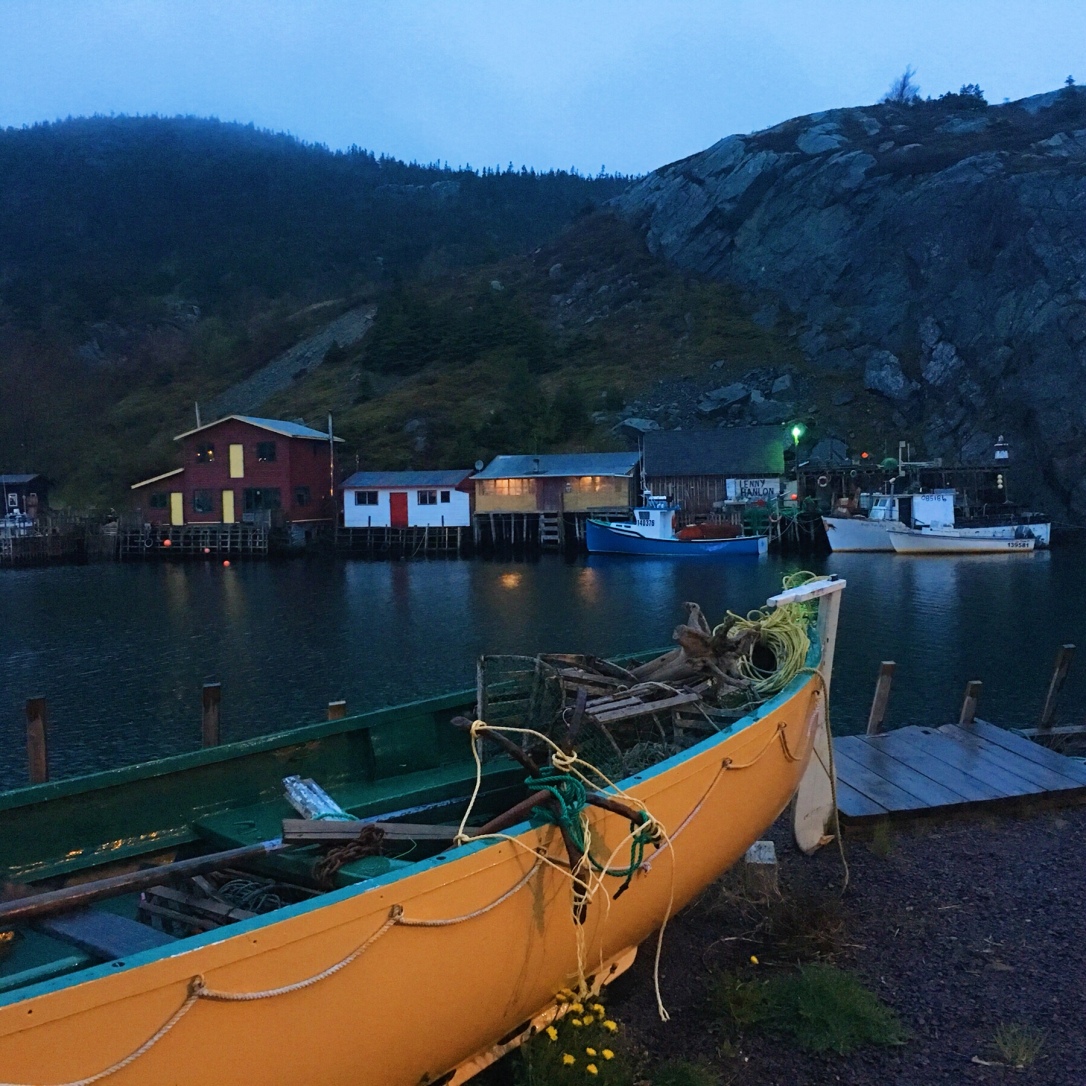 We capped the day off with a 9pm reservation at Mallard Cottage – a cozy little spot known for delicious food and commitment to locally sourced offerings. We were told by our server that they even butcher the pigs themselves onsite. 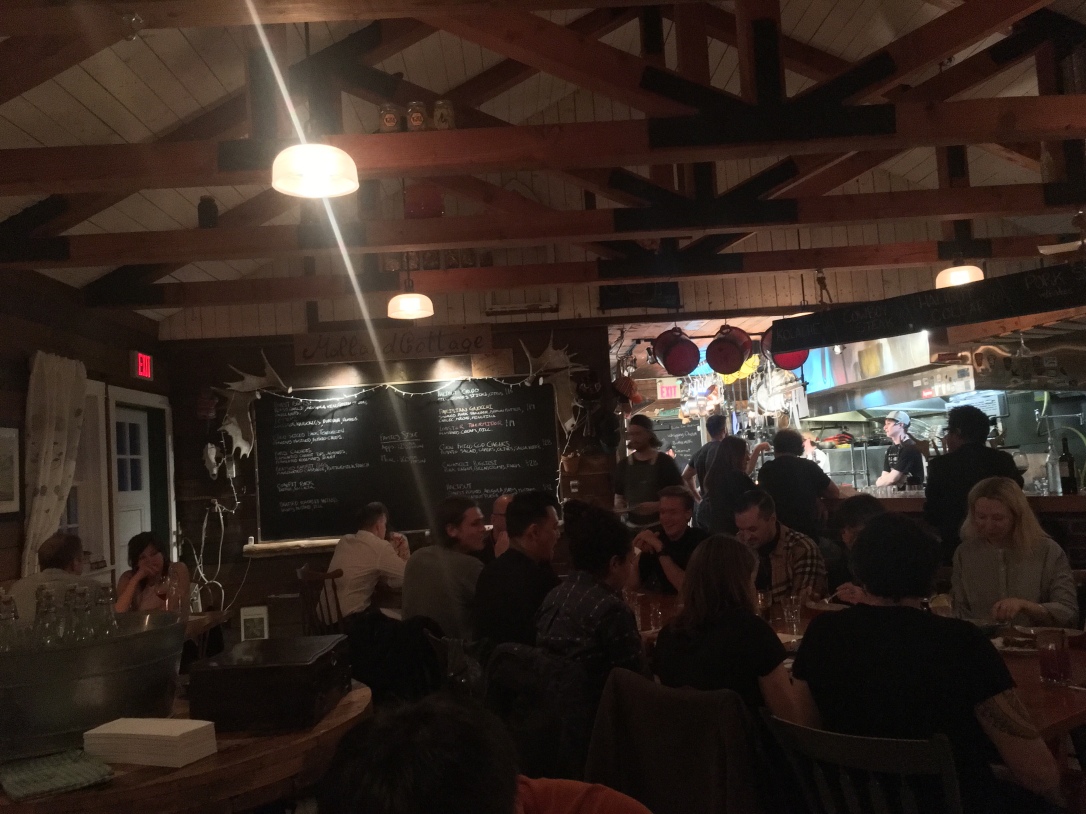