Cincinnati is called The Queen City or The Queen of the West due to its spectacular growth in the 19th century as industrialists and entrepreneurial adventurers sought out opportunities along the banks of the mighty Ohio River.

Among the many that came was Alphonso Taft, who made the move from Vermont in 1838 to establish a law practice in the city. His practice was doing well enough that by 1851 he was able to buy a house in the highly desirable Mount Auburn district, which was situated on a hill and thus an escape from the heat and smog that enveloped the city.

It was within this house on 60 Auburn St (present day 2038 Auburn Avenue, William Howard Taft National Historic Site) that William Howard Taft came into the world on September 15, 1857, the second of five children by Louise Taft, Alphonso’s second wife. William would live in the house until he went to Yale University in 1874. For any that doesn’t know, Taft would go on to become the only person to serve respectively as both as the President of the United States and the Chief Justice of the Supreme Court. 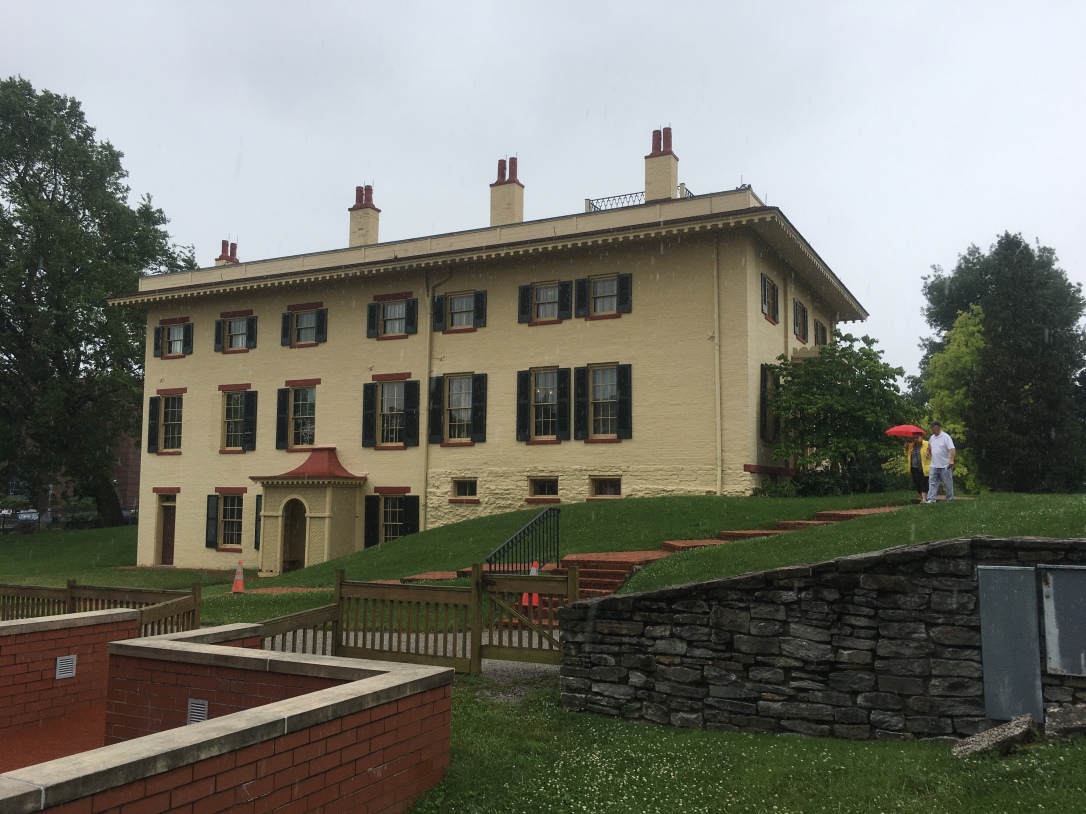 William’s paternal grandparents lived also in the house. His grandfather, Peter Rawson Taft, had been a Vermont state legislator for many years. Together with his grandmother Sylvia Howard, they would teach the grandchildren to read with stories from Aesop’s Fables.  Each time they finished a story, a custom tile would be commissioned and added to the bedroom fireplace.

Though affluent, Alphonso was not especially wealthy when he bought and subsequently expanded the house on loan from a bank. Tricks of the trade such as painting the cast iron fireplaces to look like marble and the doors and molding to look like fine ingrained woods were thus used to give the appearance of luxury while saving on costs. 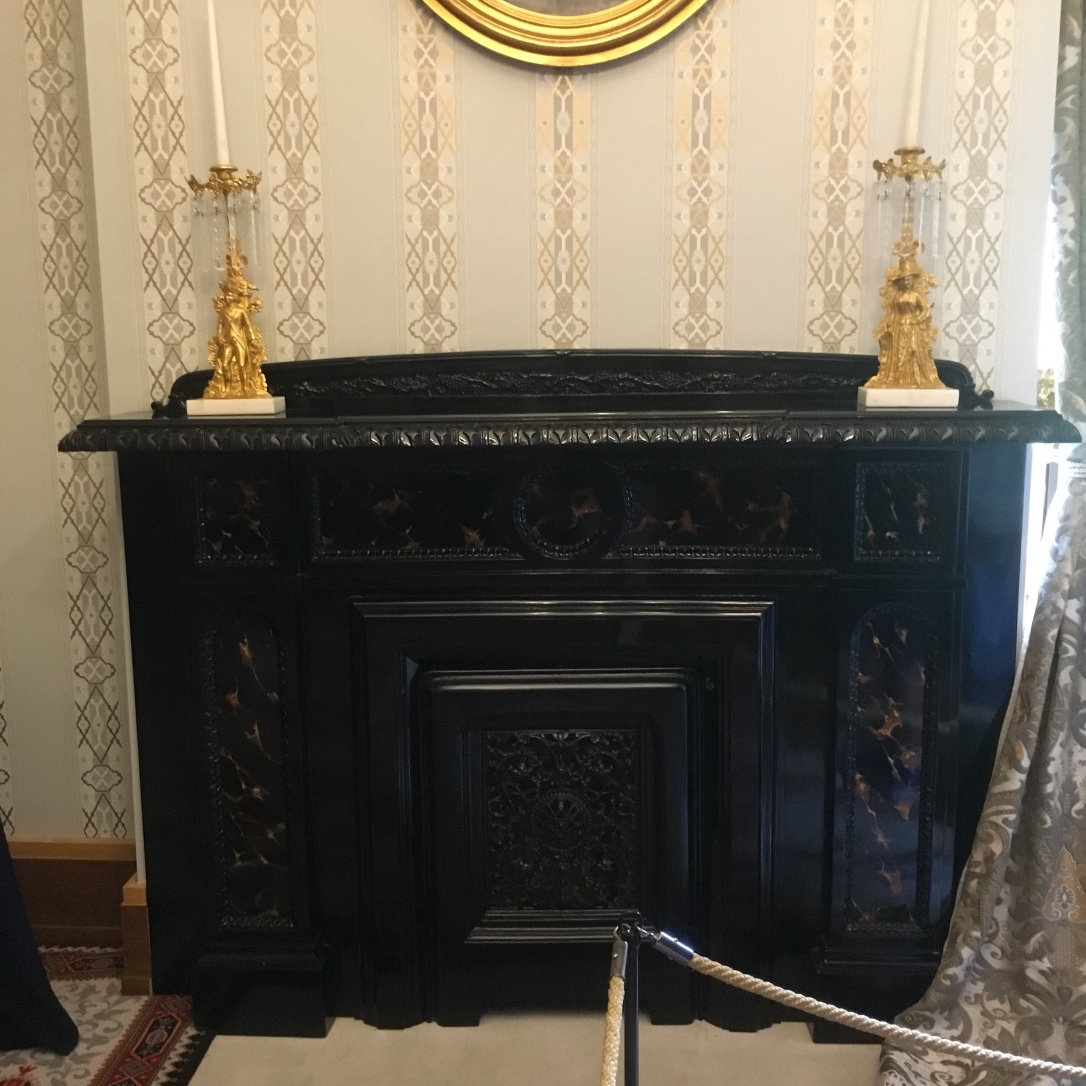 Much of the furniture is not original, the house having changed ownership through the years and being converted at one point into apartments. However, the King Solomon writing desk below donated by Taft descendants did belong to Alphonso Taft, who founded the Skulls and Bones secret society while at Yale University in 1832 with William Huntington Russell. The ‘stairs’ on the desk are movable and, as Park Rangers discovered, when aligned in a certain way revealed a hidden compartment. 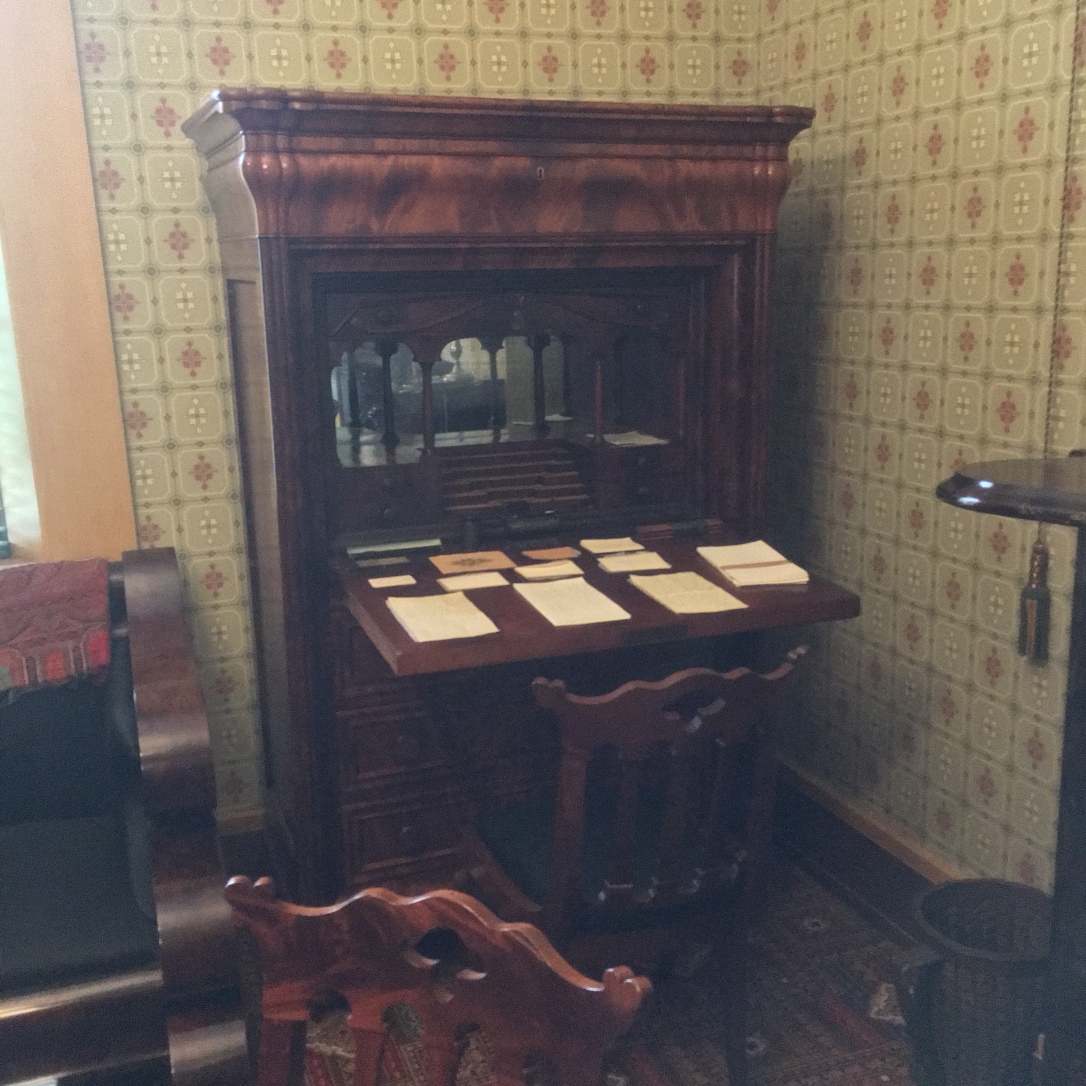 The historic site also hosts an extensive exhibit on William Howard Taft’s career and legacy. Though he was known as a trust-buster and Teddy Roosevelt’s hand-picked successor, he deviated drastically from Roosevelt in his belief in strictly adhering to the law as explicitly laid out in the Constitution. In many ways, it was his unwillingness while as President to use executive power that led Roosevelt to form the Bull Moose Party, splitting the Republican vote and resulting in Woodrow Wilson’s ascendancy to the Presidency in 1912.

It is interesting that many of the pressing issues of the day – tariffs, campaign financing, corporate greed – have all become highly relevant again today with tensions simmering near to a boiling point. Also of note is that it was Taft, a Republican, who deftly guided the passage of the 16th Amendment which instituted a progressive federal income tax. He also recommended for a postal savings plan for the common citizen, stating, ‘we have passed beyond the laissez-fair school who believe that the government ought to do nothing but run a police force.”

In addition to interpretive guides, on displays are memorabilia from Taft’s time in public office, from his first appointment as Assistant prosecutor of Hamilton County, Ohio to the Tenth Chief Justice of the United States. Below are campaign related artifacts from his successful run for President in 1908. 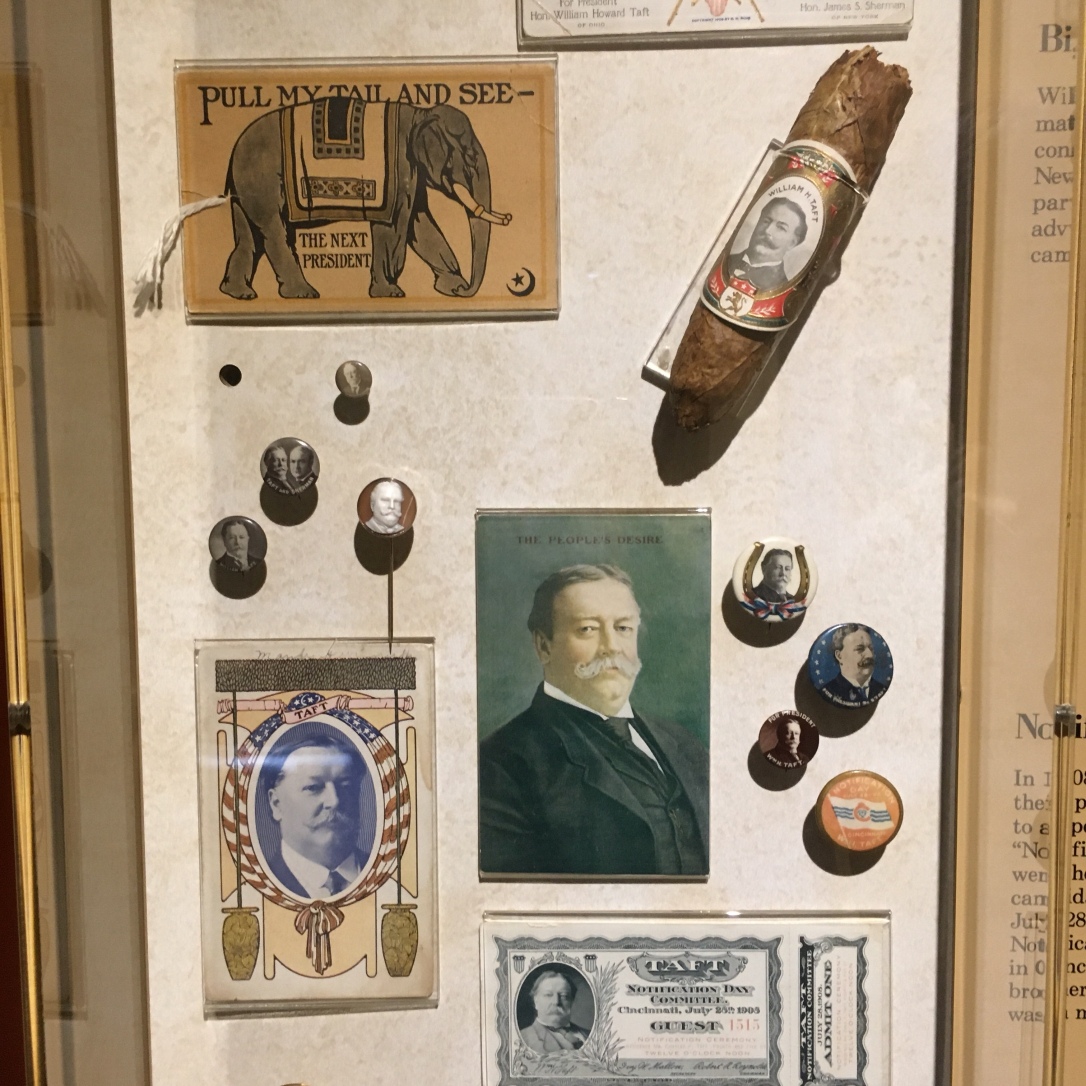 It’s difficult to fathom now with rows and rows of houses lining all of Mount Auburn’s streets, but back in Taft’s time homes came with spacious backyards with barns, pastures and orchards. 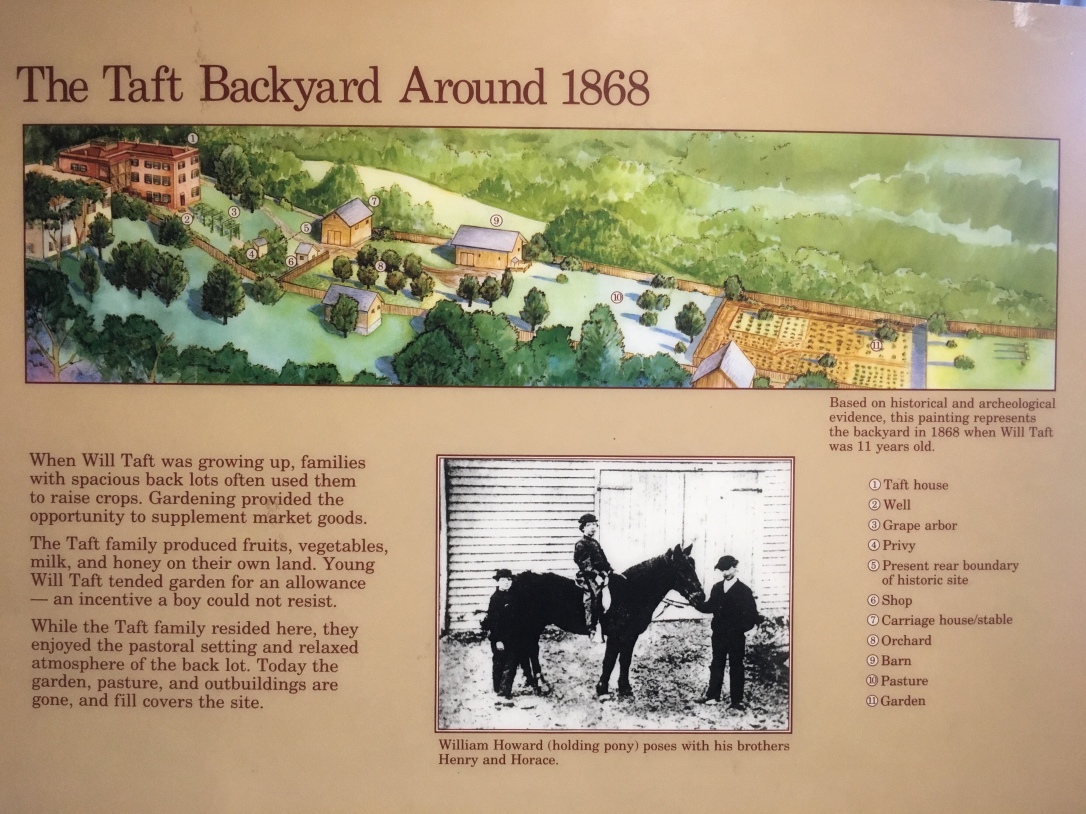 Heading from the Mount Auburn district to downtown Cincy, we chanced upon the Pride Parade in full swing.

We took a few moments to soak up the atmosphere before finding an opportune moment to cross the street towards our brunch destination – Maplewood Kitchen and Bar. It was an interesting set-up where one lines up to order and pay at the kitchen counter before being seated by the waiter/waitress who would then bring out the food when ready.

The Avocado Benedict and Chicken Tinga were decent but relatively forgettable.The cold pressed Blackberry Lemonade on the other hand was truly refreshingly delicious. They also offered bottled prosecco to turn it into a mimosa. 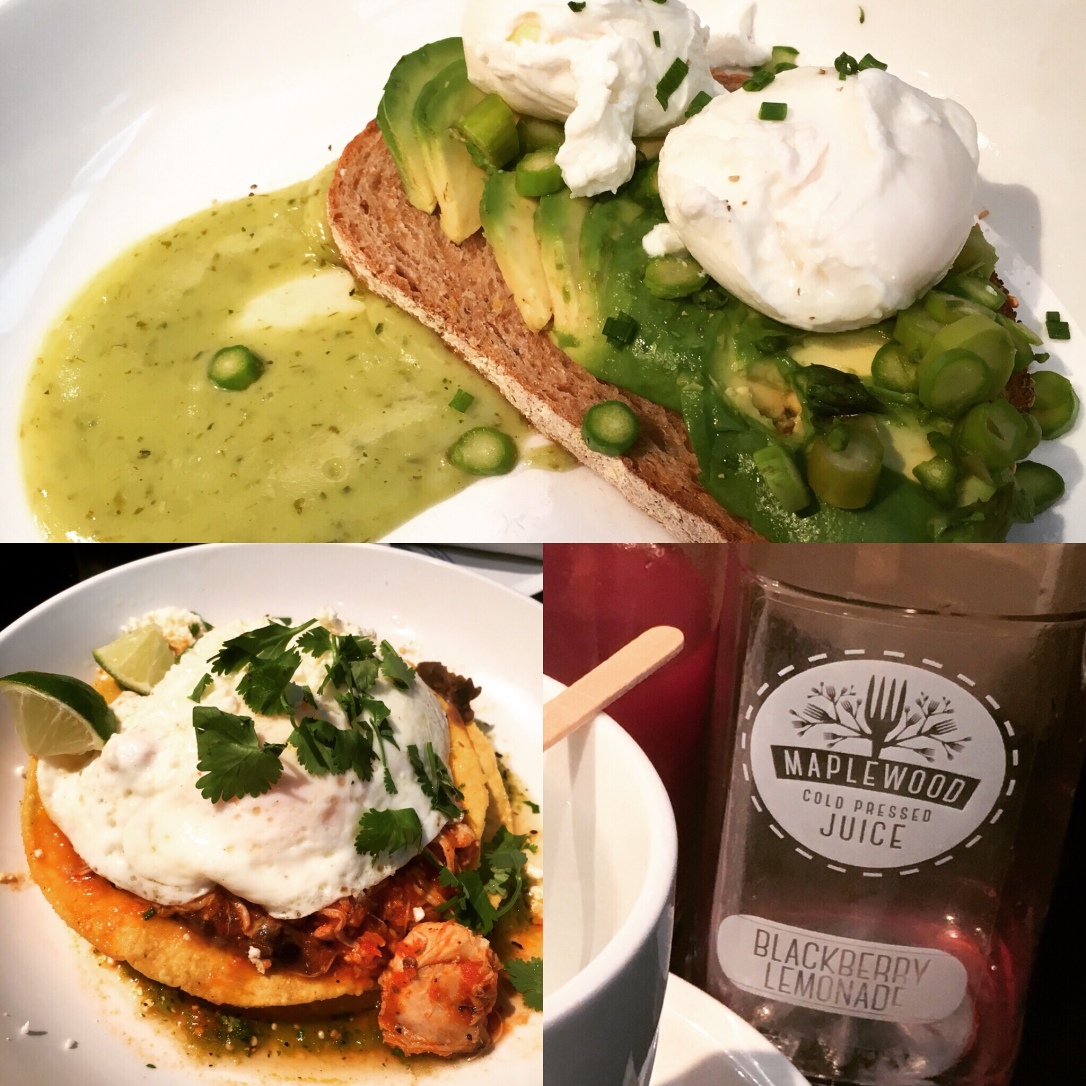 After brunch, we walked past the P&G global headquarters on our way to the Taft Museum of Art. Office buildings lined on both sides of street, framing the outer edge of 1 P&G Plaza.

One of the best exemplars of Federal architecture in the Palladian style, Charles Phelps Taft, the elder half-brother President William Howard Taft, came into possession of the house after marrying Anna Sinton, daughter of David Sinton who was the richest Ohioan of the time. David Sinton died in 1900, leaving $20 million (the equivalent of more than $500 million today) to Anne.

Taft was a successful businessmen and politician in his own right, and the owner of the Cincinnati Times-Star. The Tafts lived in the house from 1873 until 1929. William Howard Taft accepted his presidential nomination from its portico in 1908.

Currently on the front lawn is an interactive art sculpture Far Flung by Patrick Dougherty fashioned from six tons of willow tree saplings. 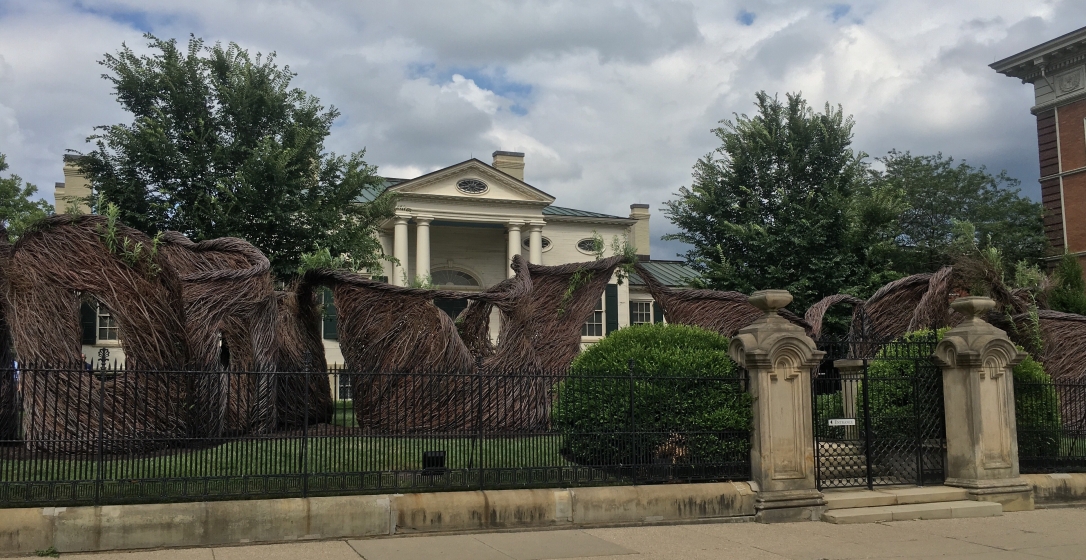 Enveloping the front entrance to the house are a suite of eight large landscape murals done by down Robert Duncanson, one of the first African American artist to achieve an international acclaim. He was commissioned around 1850 by then owner Nicholas Longworth,who is known for establishing America’s first vineyard and winery on the  hillsides of Mount Adams nearby.   The sparkling wine was so well-received  that Henry Wadsworth Longfellow published a poem dedicated to Nicholas Longworth titled Ode to Catawba Wine. Painted in the Hudson River School style, the imagined landscapes pay tribute to the Ohio River Valley.

The Tafts were avid art collectors who turned their elegant home into a museum; donating the house and the collection to the people of Cincinnati in 1927. In his 1930 obituary in the New York Times, the Tafts’ art collection was said to have been deemed at one time to be the most valuable in the West.

Afternoon started with a Cincinnati Reds vs Chicago Cubs game at the Great American Ballpark. It was somehow fitting as Charles Phelps Taft was owner of the Cubs from 1914 to 1916.

Right nearby is the visually stunning John A. Roebling Suspension Bridge which opened in 1866, spanning the Ohio River from Cincinnati, OH to Covington, KY.

Alongside the river on the Cincinnati side is the Smale Waterfront Park with its industrialist fountains that light up at night in a swirl of colors (sadly we missed that).

A short walk brought us to Fountain Square with the 43-foot-tall The Genius of Water” erected in 1867. Originally facing east towards Europe, the original homeland for much of Cincinnati’s population at the time, it’s location shifted with succeeding renovations to the square and now faces south.

During the summer, Fountain Square is home to various musical events. We happened to chance upon Special & Band (a local funk band) playing as part of Vibe Cincinnati. We settled in for some amazing food truck pork ribs from Sweets & Meats BBQ and a whole lot of funk.

We then headed across the Ohio River to Newport, KY to enjoy the spectacular sunset over Cincinnati.

We capped the day at Rhinegeist Brewery – which has its own public bus and electric trolley stop!

It was easy to see why this was the spot to be in the historic Over-the-Rhine district with more than 30 in-house beer and wine selections, themed spaces and a 150 million year old Jurassic period Galeamopus temporarily on display from the Columbus Museum Center. 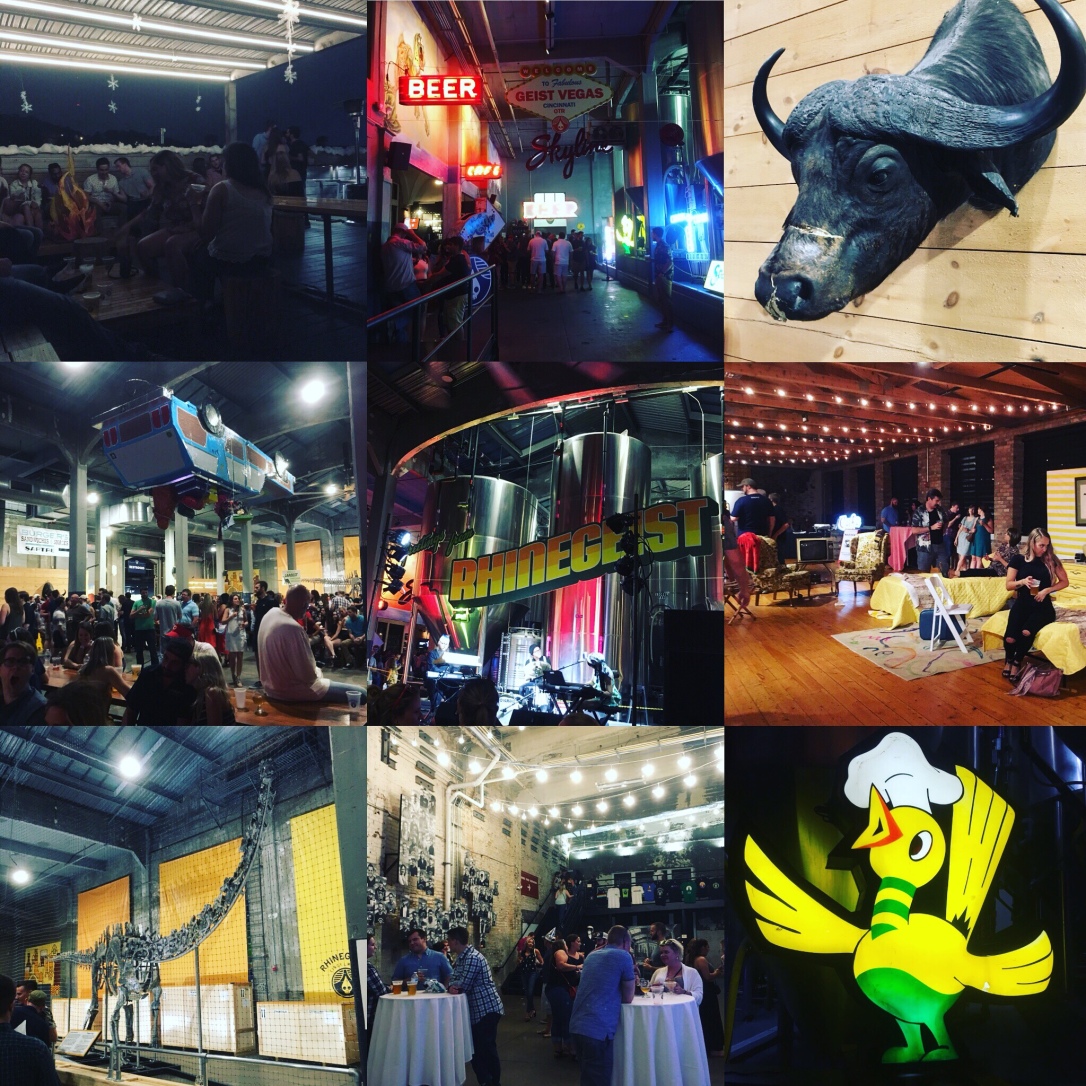