It’s fascinating sometimes how truly small this world is and how various strands intersect in unexpected ways.

This story commences in January last year (2017) with me casually browsing through the New Yorker, reading articles that catch my eye. Yes, I still read the paper version of newspapers and magazine – there’s just something about the smell of dried ink and intimate connection with the words that digital reproductions cannot replace. Also, the very act of opening up the pages leads to the creation of an enclosed space, framed by two opposing pages that transport you into another world. But I digress.

One headline caught my attention – The Culling. It was subtitled At Danish zoos, surplus animals are euthanized — and dissected before the public. Intrigued I was drawn into the debate around what ought to be the central mission of zoos and what purpose do they serve? The conversation had become a public hot-topic due to shooting and killing of Harambe the gorilla at the Cincinnati Zoo in May 2016 after a three-year-old boy had climbed within the walled enclosure.

The article compared the two dueling approaches when it came to zoo operations – one based upon a facade of realism, the other based upon a “Disneyfication” of nature. Whereas the former camp emphasizes the need to showcase the full life-cycle of the natural world where sometimes a life needs to be taken for the greater good, the latter focuses on celebrating life and avoiding all mentions of death, preferring the use of the word “non-living”. Here, the article cites Jack Hanna, the former director of the Columbus Zoo, known and loved for his “Jungle Jack” television appearances, as the symbol of “America’s folksy model”. “There’s enough going on in the world—I don’t need to have a family with children sitting watching a lion take an animal apart,” Hanna is quoted as stating in a recent interview. He noted that he’d made six hundred television shows about wild animals and had never shown a kill.

This last sentence fluttered to mind this past weekend when watching Disney Nature’s 2016 film “Born in China”. Even this Disney documentary shows Dawa, a snow leopard, killing ibexes and feeding on its meat to provide milk to her cubs. Billed as a portrayal of the circle of life and filmed in China’s natural preserves, the documentary ends on footage of a gravely injured Dawa dying in the snowy mountainside, leaving the cubs alone to fend for themselves.

From this, I drew the conclusion that the pendulum on the wider debate of how best to represent “wild” animals swings back and forth.

Rewinding back the clock, I had the opportunity to see in person Jack Hanna’s Into the Wild Live! at the local theater in February 2017. 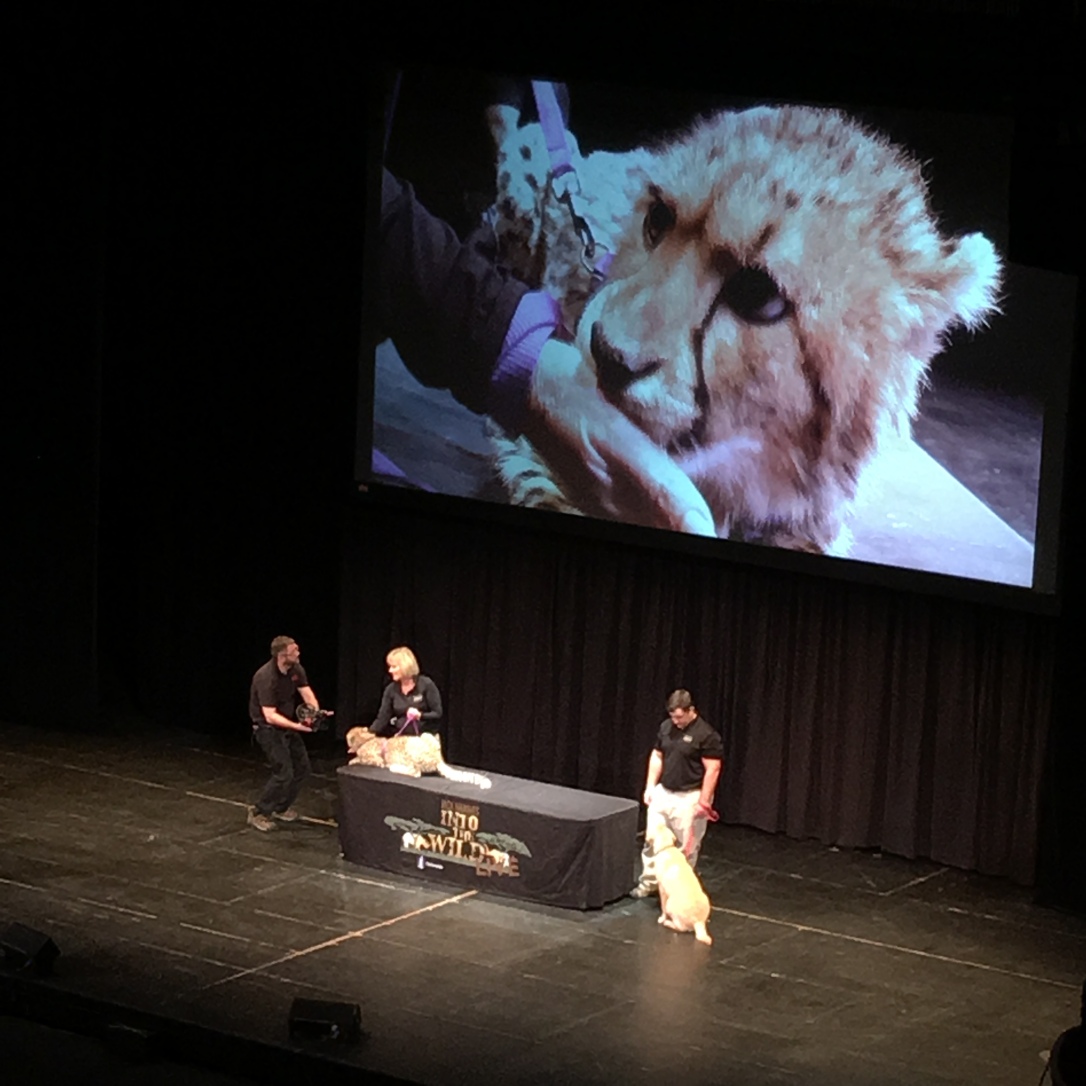 While it was delightful to see the cheetah cub come across the stage with his golden lab companion and learn about him, I couldn’t but help returning to this quote from the New Yorker article in the back of my mind:

Zoo directors in the United States and Europe have a recurring obligation […] to explain to the public that their institutions deserve to exist, and aren’t sad, and will still exist in thirty years. The oddity, and arguable unkindness, of displaying animals that are prevented from doing much of what they do in natural settings—breeding, hunting, walking from here to there—has to be discussed and defended, even on days when public attention isn’t […].

Fast forward to June this year, we were driving to Cincinnati for a wedding and passing through Columbus. I debated whether or not to visit the Columbus Zoo and Aquarium – I truly dislike seeing animals in cages – glass, wire and otherwise – it makes me uncomfortable, it makes me sad. Yet, on the other hands, this was THE Columbus Zoo, one of the premier zoos in the country, if not in the world, known for their commitment to conservation and preserving biodiversity.  In the end, it was the presence of the water park coupled with a sunny hot day that persuaded me. Upon arriving, I learned to my disappointment that Zoombezi Bay was a separately ticketed park. I opted instead for the Zoo-It-All pass, not exactly sure what it entailed.

Once inside, right on the left hand side was Jungle Jack’s Landing with 16 rides and attractions.  Though most were too juvenile for us, we did end up taking a splash in the water coaster Jack’s Jungle River Falls and a creaky ride aboard the old Sea Dragon wooden roller-coaster. Definitely an exhilarating (and cooling) way to start a zoo trip. Too bad the same couldn’t be said for the polar bears. 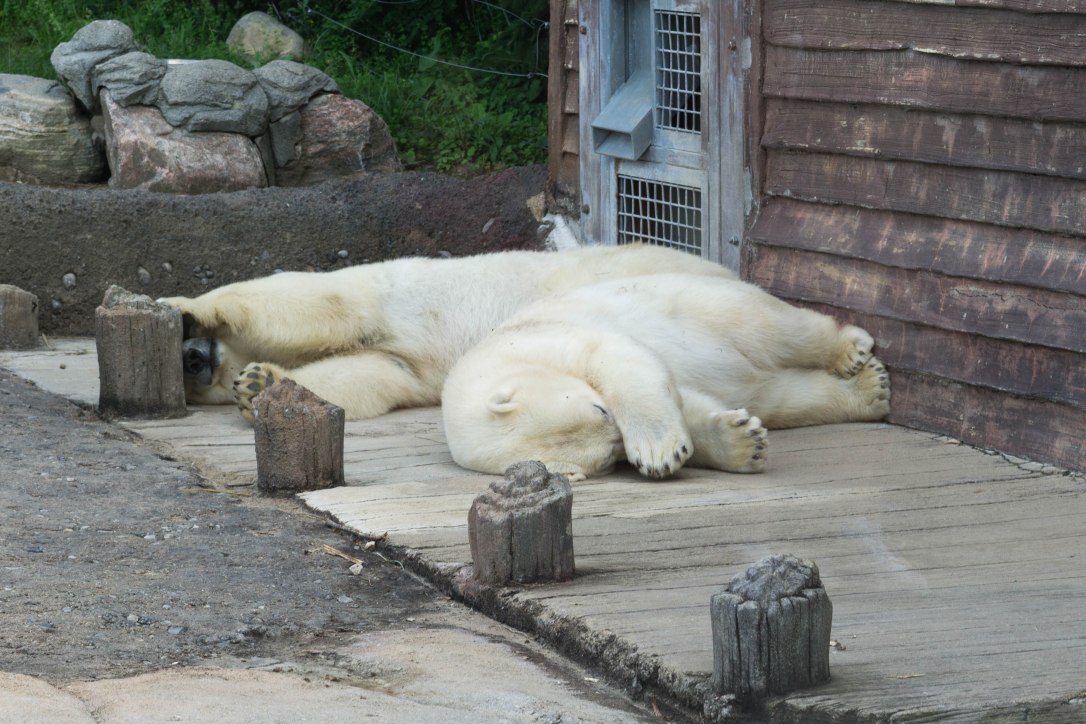 Now, I’ve been to numerous zoos in different cities, states and countries; but nowhere was there such an integrated amusement park-esque experience as here in Columbus. Interspersed with the animal exhibits were children’s playgrounds, a 4D theater (getting poked and rained upon while watching a condensed version of Storks was surprisingly refreshing), a Dinosaur Island boat ride, a train ride, a lorikeet feeding, pony and camel rides, and so much more.  Never for a moment was my attention directed solely upon the animals.

Every time my mind drifted to the conditions of the animals in captivity (eg: how sad the arctic fox looks, nothing like the spirited crystal foxes of Star Wars), there was another non-cage related diversion readily on hand.

Additionally, the flow of the attractions and exhibits were exquisite. Coming out of the Dinosaur Island boat ride, the first exhibit was of dalmatian pelicans – the largest member of the pelican family. Their long pointy beak and wide wing spans alluding to images of the prehistoric pterodactyls.

Speaking of dinosaurs, it’s the first time I’ve seen feathers added to the animatronics, I suppose it is more anthropologically “accurate”.

I found striking the fact that every animal it seemed (or at least every large animal) had been given a name. This wasn’t just any gorilla sitting in the painted landscape behind a glass pane, it was K’tembe, leader of his gang.

Which also included the playful 8-year-old Nadami. Every effort seemed to be made to anamorphosize the animals, make them human, make them relateable as a means to tug on our heart strings and provide answer to the question why conservation efforts are needed.

Who can resist not empathizing this sea turtle with an amputated left flipper? He looks just like Crush in Finding Nemo! You can almost hear him speak through the glass.

By the time we reached the Africa zone, even leopards seemed like soft fluffy cuddly house pets. I couldn’t be quite sure that this approach wasn’t in someways helping promote the exotic pet trade…

Emphasizing the underlying message of conservation, there were references to damaging human actions such as poaching and land loss on nearly every interpretation sign . Around every corner were wall mounts highlighting the achievements of ongoing research and conservation projects sponsored by the Columbus Zoo with donation boxes attached. As a example, the synopsis for the short daily 20 minute Wild Africa show presented by The Goddard School reads “guests will have the opportunity to see these amazing animals’ natural behaviors in action and be inspired to take conservation actions to help protect these species’ future.”

It really was a mini-sized version of Jack Hanna’s Into the Wild. Though not as seamless as Hanna’s perfected monologues, the presenters managed to squeeze in an extraordinary number of calls to action and solicitations such as “one way you can all help is to not ask for straws next time you order a drink from a restaurant as the majority of straws will end up in the oceans” and “here’s a special Columbus Zoo pin which we usually give out at the end of the sow for a five dollar donation, we’re giving XX this pin now because he’s been so brave”. (And yes, it was a “he” both times though equal numbers of boys and girls had eagerly volunteered. I couldn’t help but think of the prolongation of gender stereotypes.)

I self-identify as being pro-conservation – believing fully in the need for us as humans to do what we can to preserve the world’s biodiversity – but all this combined just felt too much for one day. Instead of feeling compelled to contribute, my mind wandered off to the amount resource waste expended in conservation efforts of questionable value (great article on bias of funding going to recognizable marquee animals here).

Flawed as it may be, the Columbus Zoo is worth a visit, if solely for perhaps for its Heart of Africa exhibit. The flat, grassy Ohioan landscape is perfectly suited to mimic the vast African savanna. Coupled with the hot sunny day, it felt for a moment as if I had truly set foot in Africa looking out across the lands to giraffes, zebras and wildebeests in their natural habitat – pure magic. 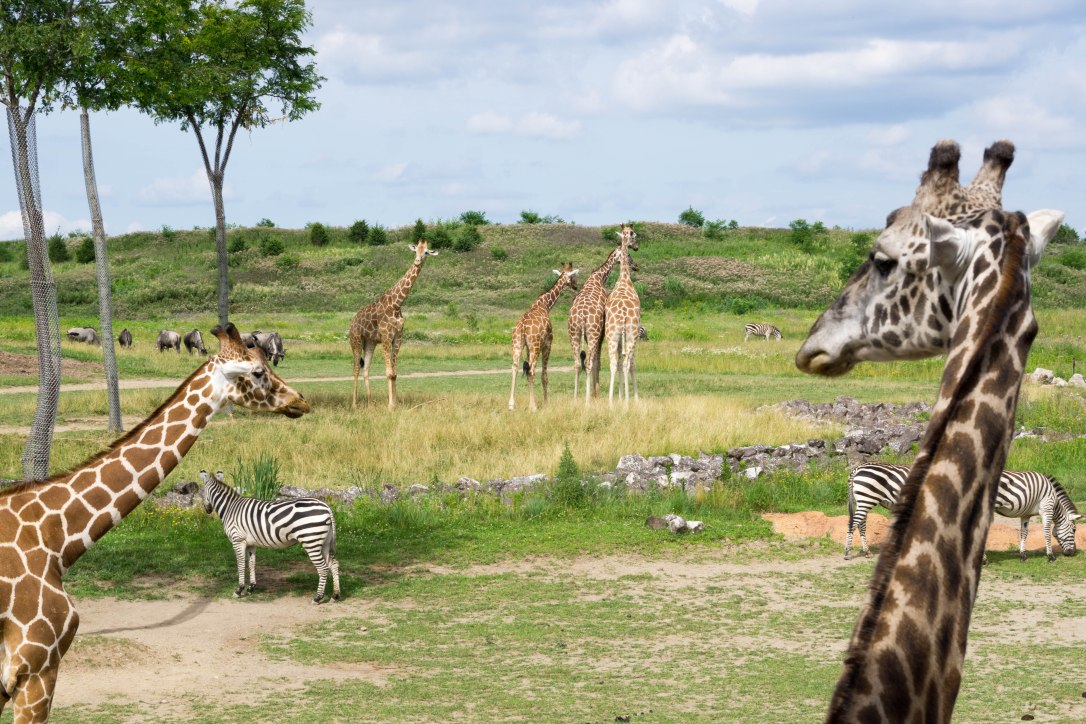 4 thoughts on “Conservation Matters at the Columbus Zoo”