Perhaps the second most famous private residence in the United States, after Falling Water, the Glass House was designed and built by Philip Johnson in 1948-49 to serve as his summer house. Over the next half century, Johnson would add both land and buildings to the estate which eventually became his primary resident, passing peacefully during the night in 2005.

New Caneen is the typical affluent old Northeast town with quiet roads lined of lush foliage and dotted with grand Victorian mansions. Decidedly atypical is the concrete and metal gate, added by Johnson in 1977 in an effort to keep curious stragglers from gaining access to the property.

Architecture lovers will undoubtedly recognize its resemblance to the Chippendale Building in NYC, designed by Johnson and John Burgee in 1980.

Directly to the left hand side is the newest building on the property, “Da Monsta” erected in 1995. With an eye towards posterity, Johnson had envisioned this gate house to be the eventual visitor center. Alas, that was not to be as neighbors balked at the idea of the hundreds of cars and thousands of visitors annually that would disturb their peaceful solitude. 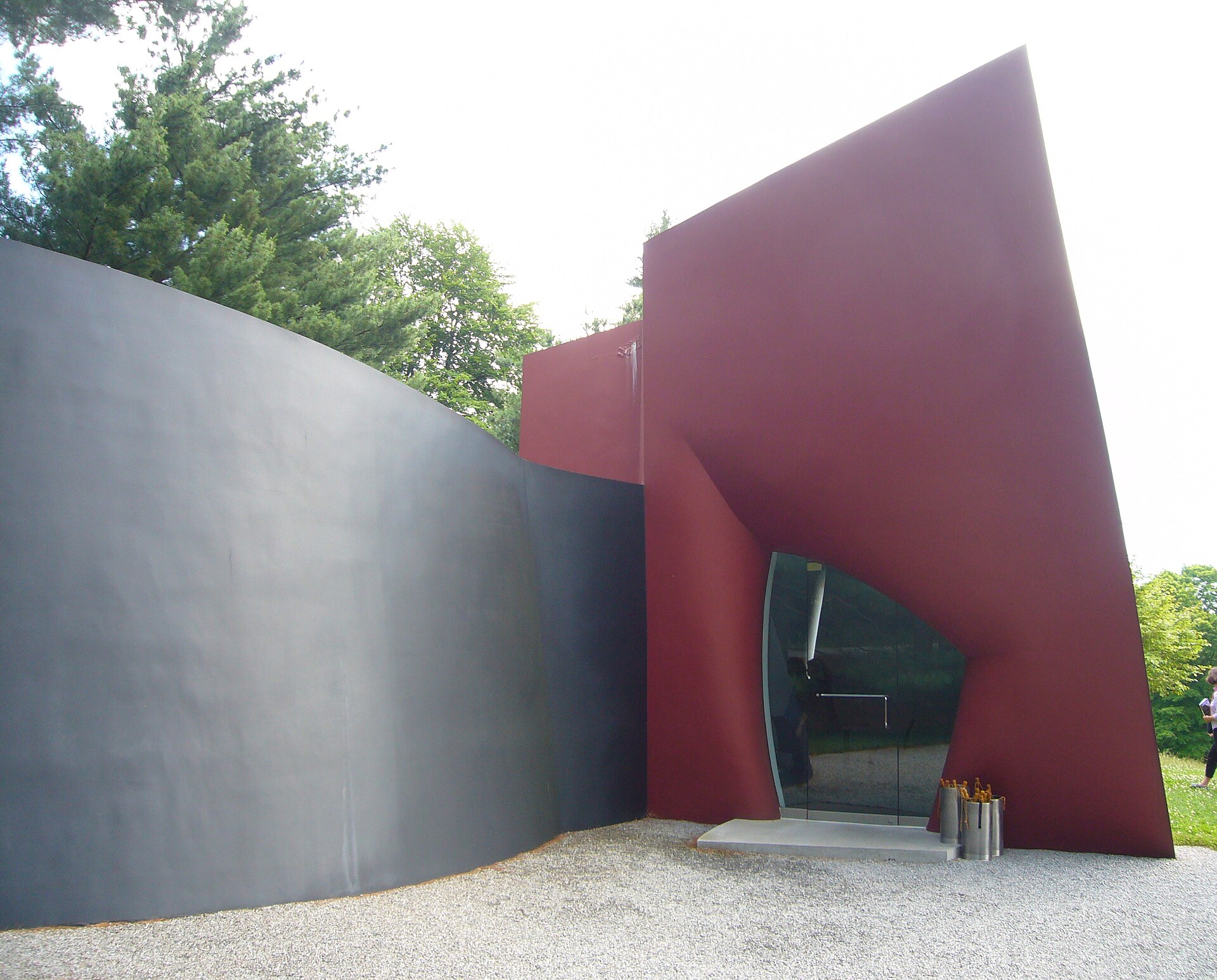 Conceived as a building without any right angles, the inspiration came neither from Frank Gehry nor Frank Stella (both close friends and contemporaries), but rather German expressionist architect Hermann Finsterlin.

Even as it sits empty, there is an intrinsic beauty to the interior which urges one to explore deeper, and deeper into the curves and crevices.

A little ways down the road is the library, building in 1980.  Johnson ingeniously incorporated the remnants of the old stone walls that once demarcated adjacent farms to evoke the rolling parsonages of old Europe.

True to the adage that one should never judge a book by it cover, what looks to be a windowless building on the outside is in reality an airy space on the inside brightly lit by abundant natural lighting flowing in from the side window and skylight.

I especially loved the carved wooden chairs, prototypes given as a gift by Frank Gehry.

Walking down the main drive, past the library, one arrives upon the core living spaces built on the original 5 acres. Consisting of 2 opposing circles and rectangles – it is yin and yang twice over.

The first circle is a solid concrete Donald Judd sculpture custom set into the landscape. A simple piece of concrete at first glance, the circle’s edges blends seamlessly into the sloping contours, almost melting into the land.

Next comes the living quarters – the transparent Glass house which lends the property its name and the enclosed brick guest house.

The stone wall in the middle serves the duel purpose of directing one’s gaze as well as, more practically, blocking car lights at night.

By now though, you should know not to take structures for what they are. Inside the supposedly dark and dreary brick house is actually a sensual space covered head to toe in the finest Italian pink silk. Unfortunately due to years of neglect, the brick house is currently deemed not safe for visitors.

The walls also are sliding doors, which open to reveal circular windows on the backside.

Rounding out the core is a circular swimming pool (classified now as a “landscape sculpture” in order to pass regulatory scrutiny – otherwise it would need to be fenced – go figure).

The crown though is the Glass House.

When seen at the right time in the day, and from the perfect angle, heaven and earth melts into one with the structure.

As any artist knows, minimal is the most difficult beauty to achieve as there is no where for imperfections to hide.

To be one with nature is an ultimate accomplishment.

It is fitting that the living room furniture consist of a set of original 1929 Mies van der Rohe Barcelona chairs as it is no secret that Johnston had modeled Glass House after the Mies van der Rohe’s Farnsworth House showcased as part of his MoMA exhibit in 1947, but only built in 1951.

Shifting gaze now to the sculpture of the two nudes in the living room (or dining room?), if they look familiar it is because they are the papier-mâché  marquettes for Elie Nadelman’s “Two Circus Women” 1931 in the David H. Koch Theater at the Lincoln Center. As the story goes, Johnson, as building architect had commissioned the monumental 20 foot-high statues carved from single slabs of white Carrara marble and arranged to have the gigantic artwork brought in just before the fourth and final wall was put in place. Thereby, ensuring that the statues could not be ordered to be taken away by disapproving Lincoln Center leadership.

If all this is not enough, the property is also dotted with architectural follies a la the grand European palaces.

For starters, there is the Pavilion built in 1962 to one-third scale.

Then there is the Monument to Lincoln Kirstein, intended to be an “event” on the landscape, built in 1985 and named after close friend and fellow Harvard alum. Standing at 30 feet high, the “staircase to nowhere” tower was meant to be both viewed and climbed; and put to well use by NYCB dancers at summer soirees.

If all this wasn’t enough, onsite is also a Painting Gallery, affectionately named by our guide as the Kunstbunker.  Constructed in 1965 to house Johnson’s private art collection, much of the artwork was donated to the MoMA including Jasper John’s American Flag.

From Andy Warhol to Frank Stella and Jasper John, it is a veritable who’s who of modern art.

Most impressive is the ingenuity of the building itself, designed in the shape of a clover leaf, each of the three petals were sized to house different sized rotating display panels.

A separate Sculpture Gallery was construct in 1970 when Johnson’s collection outgrew the building – Michael Heizer, Robert Morris, John Chamberlain…not to mention the building is a work of art in its own right, each of the 1,400 panes of glass is of a different size.

Outside sits Ozymandia by Julian Schnabel of a tree lying on its side.

As a final reminder that our eyes can be deceptive, what appears to be carved wood is actually cast bronze. What a world to live in.